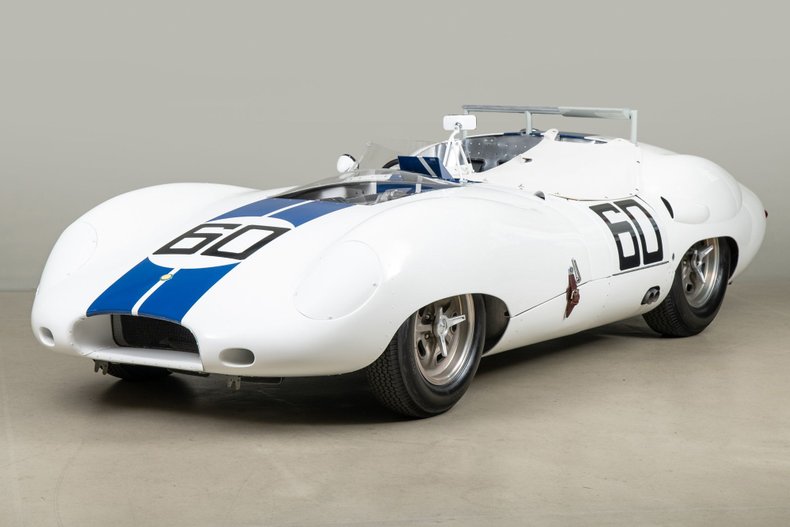 Price: Contact Seller for Price
View high resolution photos Originally raced by Briggs Cunninghams infamous Team Cunningham Raced by Stirling Moss, Walt Hansgen, Briggs Cunningham, Ivor Bueb, Bob Grossman 1959 SCCA C-modified national championship winner Four 1st place finishes in 1959 while being piloted by Walt Hansgen Class win at the 2015 Pebble Beach Concours dElegance Major restoration by Canepa to return to period-correct condition Engineered by Brian Lister, body developed by Frank Costin In all of vintage racing, there is no more desirable or collectible category of cars than the front-engine sports racers that ran in international and SCCA competition from the mid 1950s into the early 1960s. As a group, they embody the beautiful shapes, wonderful sounds, and exhilarating performance that defines historic racing. During that era probably the most respected and successful independent manufacturer was Lister of Cambridge, England. In the early 50s, out of a personal love for racing, Brian Lister steered his third-generation engineering and fabrication company into building race cars. Beginning with MG and Bristol powered sports cars the young team immediately made a mark on the European racing scene. After a fire at Jaguars Browns Lane Plant destroyed the competition department in February 1957, Lister was there to pick up the pieces and take advantage of the lack of competition. One prototype was built, along with 12 production race cars with only three of these being powered by a Jaguar engine. This Lister-Costin Jaguar, the second of the 12 cars produced, is one of the rare Jaguar-powered cars. In 1957 Lister presented its first Jaguar-powered sports racer to the world of racing which received a large amount of success due to the capable hands of skilled driver, Archie Scott-Brown. British Petroleum, Listers sponsor, had been searching for some large-displacement racing cars that would go up against Aston Martin and the Ecurie Ecosse Jaguars, both sponsored by the Esso Petroleum corporation. Listers first batch of race cars went to the legendary US-based Team Cunningham to both race alongside and eventually replace their aging D-type Jaguars. American racer Briggs Cunningham was undoubtedly one of the most important figures in postwar sports car racing, leaving his profound mark on the entire world of racing as a driver, team owner, and constructor. 1959 would be the year that Brian Lister decided to restyle the initial bodywork. While the original bodywork did its job well, Brian left that it was leaving something on the table, especially in straight-line speed. Famed aeronautical engineer Frank Costin was hired to redesign the entire bodywork. Having designed bodywork for the 50s era F1 cars (and influencing front-engine Grand Prix cars for years to come), Costin was the perfect fit that designed an effective, elegant, and timeless design. Chassis BHL 123 is arguably one of the most historically important and best-kept examples of the entire run of both the Costin and Knobbly-Listers. Powered by a 3.8-liter Jaguar DOHC inline six that produced an estimated 300hp, paired to a 4-speed manual transmission, and 4-wheel independent suspension with 4-wheel disc brakes, it was an advanced beast indeed. BHL 123 was first purchased by Briggs Cunningham for his legendary racing team and prepared by team chief mechanic Alfred Momo. Its inaugural race was the 1959 12 Hours of Sebring, piloted by the legendary Sterling Moss alongside ex-Jaguar works racer Ivor Bueb, with Russell Boss brought on as a relief driver. With the Cunningham racer on the starting grid in 2nd place, the teams optimism was high. While in 3rd place, Stirling Moss made a scheduled pit stop and keen to get back into the race left before the fuel tank was full! After a number of laps later, disaster struck. The Lister ran out of fuel o

Note from the publisher:
Welcome to our collector car marketplace where we feature thousands of classified ad listings of vintage cars for sale. We hope that you will bookmark our site and visit often; our cars are updated every day. Furthermore we encourage you to subscribe to our mailing list so that we may periodically notify you of interesting classic cars that become available.
Home > Classic Cars For Sale > Lister > Costin Jaguar > 1959 Lister Costin Jaguar