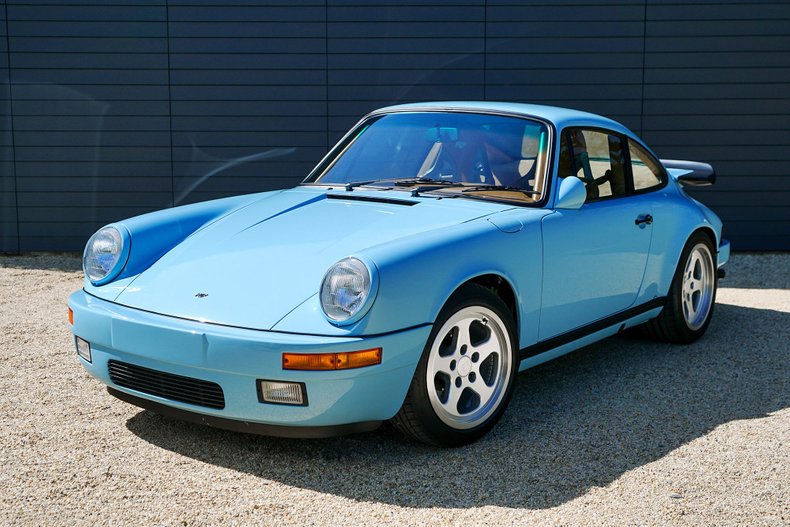 1985 RUF Carrera 3.4 VIN: W09CRCBFS32R06013 Click here to view high resolution photos Like new condition 732 miles since restoration Original RUF-VIN car built in 1984 Stunning Gulf Blue over Cognac-brown leather interior Rare normally-aspirated Carrera 3.4 specification RUF-built 3.4-liter 250hp/224lb-ft of torque, 5-speed manual transmission Fully restored in 2015/2016 Long list of upgrades both mechanical and cosmetic Built by the German artisanal craftsmen of RUF Coming from humble beginnings as a small repair shop in Germany, RUF today is known as one of the foremost tuners and manufacturers of specialized vehicles based on Porsches. In 1974, Alois Rufs father had just passed and the young German took the reins of the company. With a keen interest in sports cars from Zuffenhausen, especially the Porsche 911, RUF built their first car in 1975. From there, the German shop progressed steadily over the years with different upgrades and builds bringing us to present day, where RUF is now manufacturing a carbon-fiber car that looks like a 911, but has no chassis components from a 911. RUF is most famous for their CTR Yellowbird, a turbocharged 500hp monster that went around the iconic Nrburgring in a highly-watched video production. While this turbocharged sibling seems to get all of the attention, its rare normally aspirated brother is the better-kept secret: the RUF Carrera 3.4 For many, normally aspirated engines are the ideal to strive for. With immediate response from the throttle, an unabated exhaust note, and a sense of mechanical purity, many gravitate towards this setup. RUF knew very well that not everyone would be an adopter of the turbocharger, so they offered a what was essentially a special normally-aspirated version of their turbocharged CTR. This RUF Carrera 3.4 builds brought a larger displacement to the standard Porsche 3.2-liter Carrera engine. With bigger pistons and cylinders, it bumped power to 250hp and 224lb-ft of torque. Along with the engine upgrade, RUF completely built these cars to their specifications and to the options of their customers choosing. As with the CTR Yellowbird, these were based on the narrow body Porsche 911. As a result of these upgrades, the RUF Carrera 3.4 became an iconic example of the RUF brand with its added power and other mechanical upgrades. This RUF was ordered new from the RUF factory in Pfaffenhausen, Germany, beginning as a bare white chassis from Porsche and received an authentic factory RUF VIN and built in 1984. It was originally painted in Prussian Blue over a classic grey leather interior, using a Porsche factory 3.2-liter 240hp engine with a RUF motronic DME. It was also optioned with a RUF dual sport exhaust, RUF front spoiler with integrated oil cooler, RUF instrumentation, RUF 360mm sport steering wheel, RUF limited slip differential, RUF short shifter, RUF sport suspension with Bilstein shock absorbers, and a RUF front shock tower brace, along with standard Porsche equipment including: rear Carrera tail, European headlights, 88-liter fuel tank, and air conditioning. The car was imported into Canada and reportedly remained there until the early 2010s when it was imported into Texas. It was then acquired by an owner looking to have it completely restored by RUF in Germany, with a few extra upgrades to bring it up to modern standards. This 1985 RUF Carrera was completely restored in 2015 and 2016 at RUFs headquarters, with very few of these built by RUF. Starting with the RUF Carrera 3.2, the entire car was disassembled to its bare chassis. The rain gutters and sunroof were removed, with an integrated roll cage welded into the car for superior safety. The entire body was ice blasted to remove any original surface finishes, and the car was painted in the stunning Gulf Blue color. The engine received a complete

Note from the publisher:
Welcome to our collector car marketplace where we feature thousands of classified ad listings of vintage cars for sale. We hope that you will bookmark our site and visit often; our cars are updated every day. Furthermore we encourage you to subscribe to our mailing list so that we may periodically notify you of interesting classic cars that become available.
Home > Classic Cars For Sale > Ruf > Carrera 3.4 > 1985 Ruf Carrera 3.4