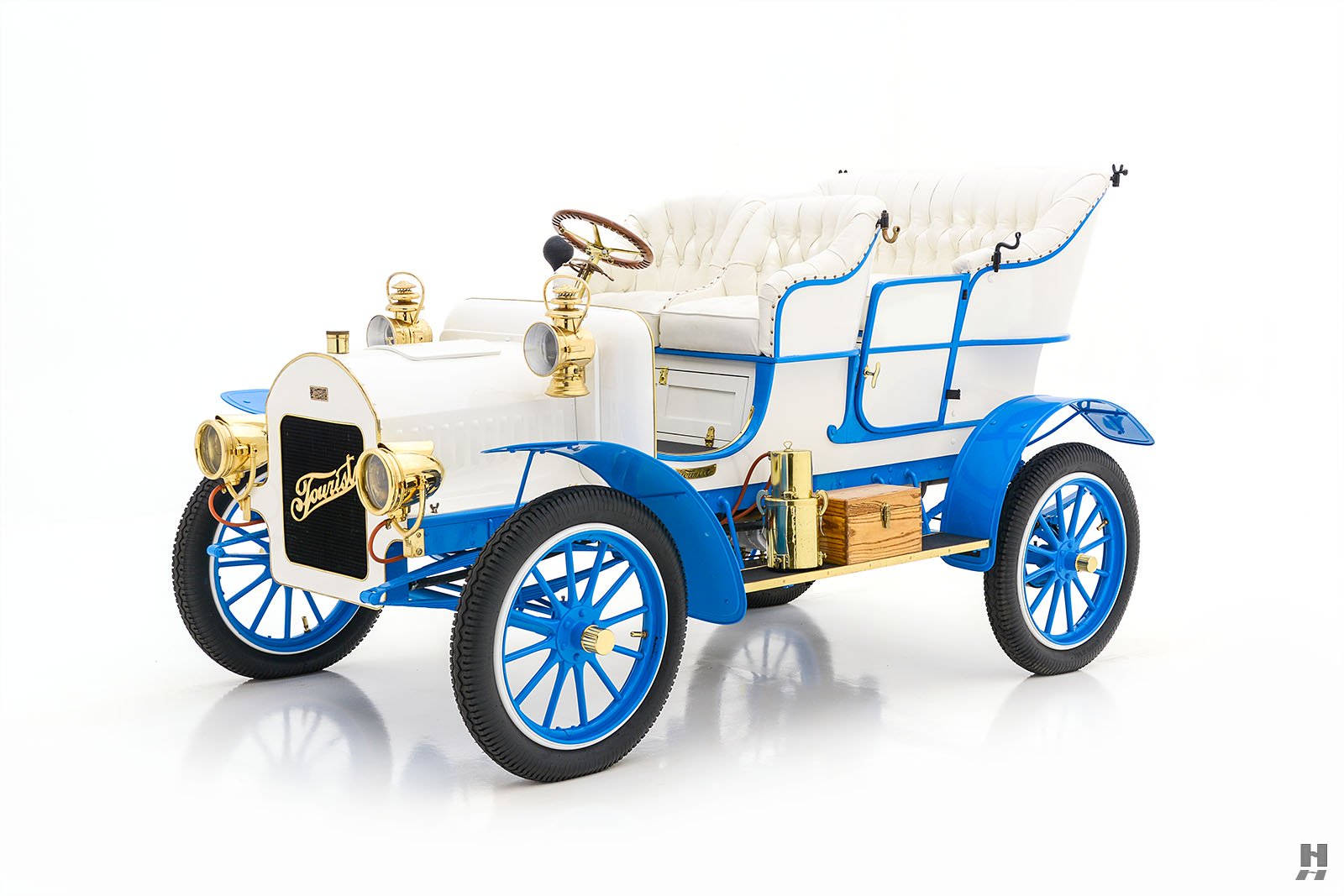 Price: USD $59,500
The Tourist may be a relatively unknown marque today but for a brief period before World War I this was Californias most popular automobile. The Auto Vehicle Company of Los Angeles was founded in 1902 and experienced rapid growth followed by an equally rapid decline. Annual production steadily grew from just 17 cars the first year to more than 500 by 1906 and yet by 1910 it was all over. In those days most of Americas auto production was concentrated in the Midwest and Northeast. Without an efficient transportation infrastructure in place the concept of a localized car company made good sense. Things looked promising for the Tourist in the early years; however by1909 the company reported trouble acquiring parts. That year they reorganized as the California Automobile Company and Tourist production continued. Unfortunately the problems didnt cease and 1910 proved to be their final year. The remaining inventory was sold off at cost and California Automobile Company stopped production and changed focus to be a dealer for Firestone Columbus Warren-Detroit and Columbus Electric automobiles.The Tourist was a fairly conventional car for its time with the earliest 1902 models featuring a single-cylinder 7-hp engine mounted under a rudimentary body. The quality and sophistication improved rapidly and by the 1903 model year the Tourist gained a second cylinder and a bump to 8 horsepower. The next year output jumped to 12 horsepower and again to 20 HP for 1905. For several years the only body style available was an open 5-passenger touring. However a runabout roadster and limousine did join the range in later years as did a large 35/40 horsepower 4-cylinder model. For a few brief years the Tourist offered motorists a stylish high-quality automobile with a uniquely west-coast flair.This 1906 Tourist Model K Touring is one of just a handful of known survivors from this fascinating marque. Another long-term member of the Frankel collection Alvin purchased this car as a project in 1954. The extensive history file includes a few photographs dated from that year showing the Tourist rather precariously perched atop a trailer being towed home by a Willys Jeep! Judging from the photos we can see the Tourist was complete but in need of a full restoration. As a proud Californian the home-market Tourist fit right in with other cars in Frankels collection. It sat quietly in his garage for several decades as raising a family and tending to his other collector vehicles took precedent over the Tourist. Finally around 2004 Mr. Frankel began the painstaking process of restoring the Model K from the ground up.Much of the restoration process is well-documented through photographs and invoices. Over the years Mr. Frankel had amassed a considerable amount of historical information on the marque including club publications period advertisements and even a set of original photos used for the factory parts catalog; all of which aided in the nut-and-bolt restoration and remain part of the cars history file today. The project began with the wood body sent off to a specialist in Arizona for a complete rebuild. Once the body was reunited with the chassis and carefully checked for fit the mechanical aspect of the project began in 2007. By early 2012 the project reached completion and the charming little Tourist back to its former glory.According to marque historians Tourists were typically finished in bold colors with elaborate striping that reflected the companys Southern California roots. Mr. Frankel selected an appropriately vivid two-tone color scheme of bright white with blue chassis mudguards and trim. The attractive colors are accented with plenty of beautifully polished brass including acetylene headlamps twin carriage lamps body trim and that lovely Tourist script radiator emblem. White button-tufted leather upholstery completes the color scheme and is expertly restored to a high standard.The Tourists mechanical layout features the 196 cubic-inch horizontally-opposed twin mounted amidships beneath the body. The big twin drives a two-speed planetary gearbox which sends power to the rear wheels via a chain-driven axle. Following a careful check and light service the Tourist was found to run and drive very well and has seen little more than shakedown miles since it was completed. The 20-horsepower output is impressive for an early two-cylinder engine with plenty of torque on hand to keep it motoring along nicely.This is an ideal candidate for entry into organized tours with groups like the Horseless Carriage Club or Veteran Car Club or for display in local shows and concours events and casual ice cream runs with the family. It was undoubtedly loved by Mr. Frankel who owned it for 66 years and delighted in its restoration. An exceptionally rare and immensely charming veteran motorcar the Tourist is sure to charm its next keeper for many years to come.Offers welcome and trades considered For additional details please view this listing directly on our website https://hymanltd.com/vehicles/6688-1906-tourist-model-k-touring/

This 1906 Tourist Model K Touring was listed for sale on 6-21-20 13:50:39. The vehicle color is not available and VIN is not available . Kindly check ad for seller's location. Seller`s stock ID is hyman6688. There are other Tourist cars currently listed for sale on our website. You may desire to see what other Tourist cars are selling for by visiting our Sales Data page.

Note from the publisher:
Welcome to our collector car marketplace where we feature thousands of classified ad listings of vintage cars for sale. We hope that you will bookmark our site and visit often; our cars are updated every day. Furthermore we encourage you to subscribe to our mailing list so that we may periodically notify you of interesting classic cars that become available.
Home > Classic Cars For Sale > Tourist > Model K Touring > 1906 Tourist Model K Touring