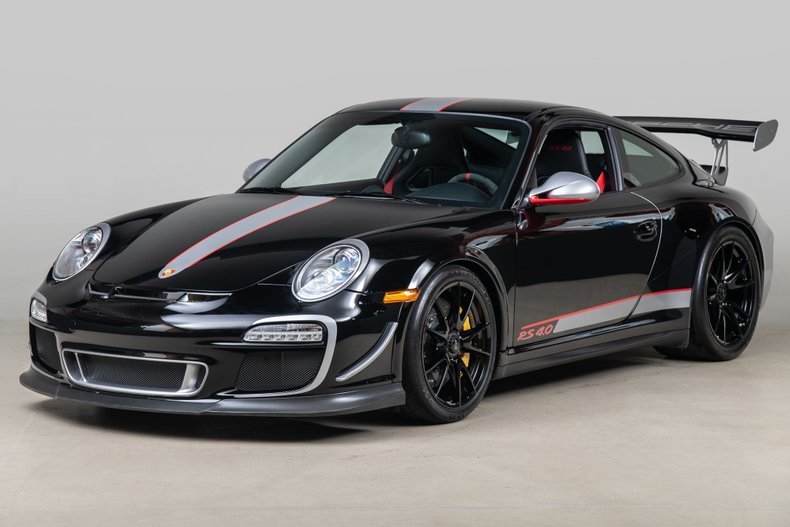 Click here to view high resolution photos One of only 141 produced for the U.S. 2 owners 3,931 miles One-year-only production for 2011 Heavily optioned from the Porsche factory, $211,875.00 MSRP 6-speed manual transmission, Mezger-designed 493 horsepower 4.0-liter engine Rare factory black specification over red Alcantara and black leather interior Weighs under 3,000 pounds Options: Dashboard Stitching Dev. Color, Door Stitching in Dev. Color, Dev. Stitching Side Central Console, Rear Side Panel Dev. Stitching, Rain Sensor, Wheels Painted in Black, Porsche Ceramic Composite Brakes (PCCB), Front Axle Lift System, Sound Package Plus, Cupholders, Dynamic Cornering Lights, Bluetooth Phone Interface, Leather Interior in Black/Red, Seats Full Leather/Alcantara, Sport Chrono Package Plus, Porsche Communication Management (PCM), XM Radio, Universal Audio Interface, Floor Mats Colored Porsche Crest and Leather Surround, Lid of Storage Bin in Red Alcantara with Porsche Logo, Extended Carbon Package, Automatically Dimming Interior and Exterior mirrors, PCM 3.0 w/Extended Navigation, Side Air Vents in Carbon, Headlight Cleaners in Exterior Color, Rear Center Console in Carbon, Foot Rest Aluminum, Central air vent slat (carbon), RS 4.0 Logo in Red on Rear Lid In 2011, Porsche saw itself create a swan song of a Porsche 911 as the last hurrah for the 997 as it reached the end of its production. A driver-focused GT3 RS with a 4.0-liter 493 horsepower engine, titanium connecting rods, forged pistons and a crankshaft lifted from the GT3 RSR race car: The 2011 Porsche 911 GT3 RS 4.0. Made in a limited quantity of 600 for the entire world, with only 141 available for the U.S., the car was an instant classic. Making full power at 8,250rpm with a stratospheric redline of 8,500rpm, the car was the ultimate 911. Paired with rear wheel drive, a 6-speed manual transmission, and one of the last 911s to have hydraulic steering, the 997 GT3 RS 4.0 is still considered one of the best driving 911s to date, period. Interestingly enough, the car was a last-minute decision, a conversation made with Porsche execs after doing so well at the Nrburgring 24 Hours between Andreas Preuniger (Porsche GT Development) who wanted to give the 997 a last hurrah. Youll find plenty of motorsport-inspired components and weight-saving design throughout the car, cementing its lineage to Porsche race cars. Carbon fiber rear wing, carbon fiber front fenders and hood, its doors in aluminum, rear side windows in Perspex, front dive planes, dynamic engine mounts, and solid ball joints on the lower rear suspension. The short throw transmission, its razor-sharp handling, suspension tuning, and steering feedback all feed valuable information to the driver in a pure, unrelenting fashion. This GT3 RS 4.0 was purchased in November of 2011 in Miami, Florida. Ordered from the Porsche factory with an extensive list of options (see above), the GT3 RS 4.0 had an MSRP of $211,875.00 new! With a rare black exterior over a black and red Alcantara/leather interior, there were only 141 total 4.0s delivered to the U.S., with only 600 worldwide. Put in comparison, over 600 Carrera GTs were sold in the U.S. The GT3 RS 4.0 was used sparingly, offered for sale in August of 2013 with only 1,241 miles on the odometer. On August 26th, 2013 the car was sold to its 2nd and most recent owner who kept the car in pristine condition in his collection of other sports cars. He also had a white GT3 RS 4.0 with over 15,000 miles but was so taken by the black one that he had to have another one. Maintained at Beverly Hills Porsche, the car kept its maintenance up to date and mileage low. Recently arriving at Canepa, the GT3 RS 4.0 was immediately put through the Canepa Difference process. Consisting of a full comprehensive mechanical inspection first, th

Note from the publisher:
Welcome to our collector car marketplace where we feature thousands of classified ad listings of vintage cars for sale. We hope that you will bookmark our site and visit often; our cars are updated every day. Furthermore we encourage you to subscribe to our mailing list so that we may periodically notify you of interesting classic cars that become available.
Home > Classic Cars For Sale > Porsche > 911 GT3 RS 4.0 > 2011 Porsche 911 GT3 RS 4.0