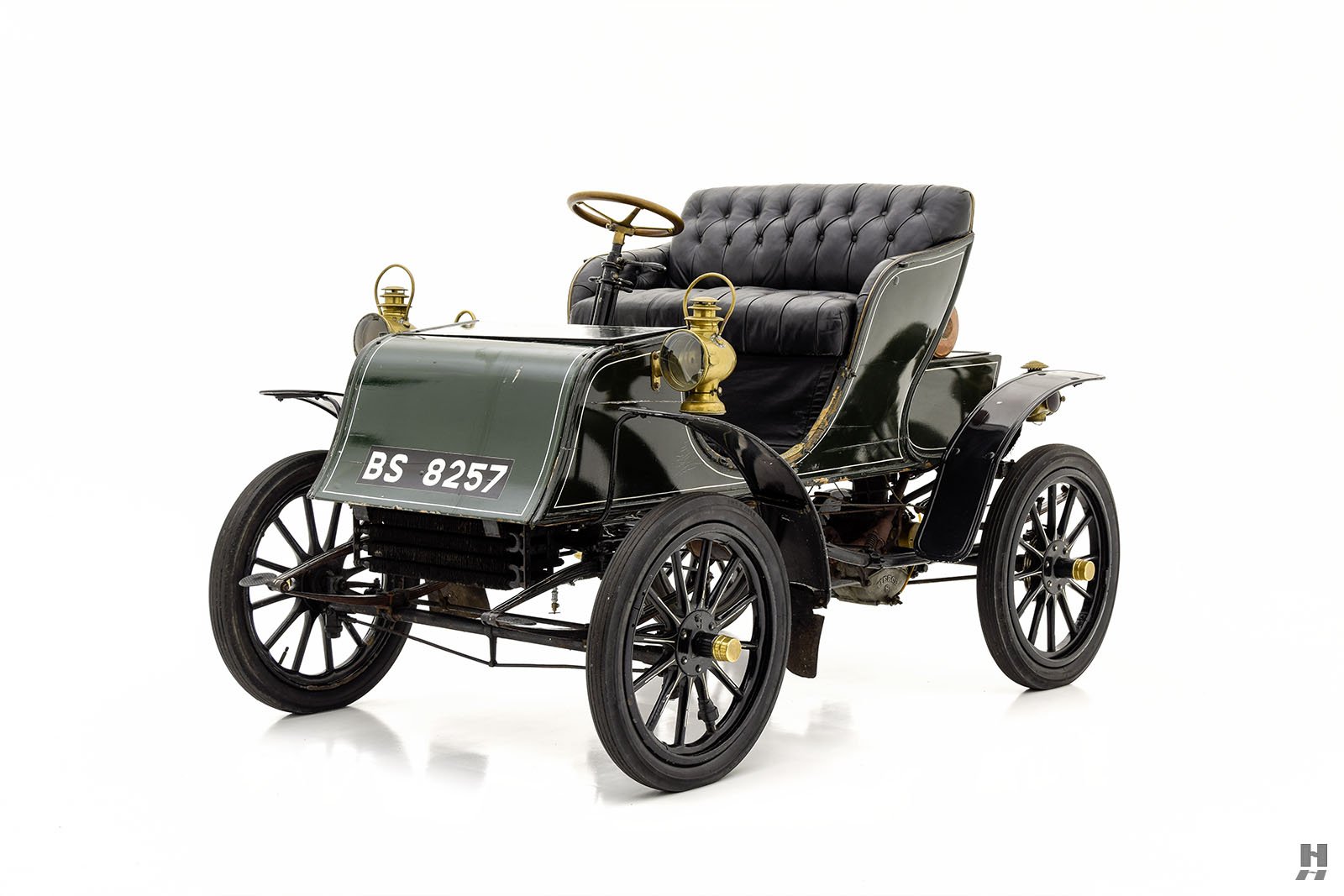 Pierce-Arrow of Buffalo New York was once counted among the most prestigious and revered automobile manufacturers in the world. The path to greatness winds back to 1865 with the founding of Heintz Pierce and Munschauer. The company manufactured exquisite quality gilded birdcages ice boxes and various high-end household appliances. In 1872 the middle partner bought out his colleagues and reorganized as the George N. Pierce Company. Bicycles were soon added to the portfolio and Pierce became a leading manufacturer in that market. In 1900 company Treasurer Colonel Charles Clifton urged Pierce to pursue the development of an automobile. Their first such machine a steam-powered car was a failure but they pressed on regardless and abandoned steam power for the preferred petrol power for their second effort. In early 1901 Pierce hired the English-born engineer David Fergusson who designed the firms first production cars around a single-cylinder gasoline engine. Fergusson was essential to Pierces growth in the motorcar industry and he served as chief engineer for the next twenty years.The first production Pierce automobiles were called Motorette and featured four wheels and a single cylinder engine that was remarkably similar in appearance to the De Dion unit they previously built under license. Power output grew steadily every year from the 2 horsepower models of 1901 to 8 horsepower by 1904. A two-speed planetary gearbox sent the drive to the rear axle which featured two wheel brakes build into the hubs. Steering was by a wheel which was a rather innovative feature in a time when tiller steering was still the standard. Customers could opt for the runabout touring or this somewhat unusual Stanhope model with its folding two-place dicky seat positioned ahead of the driver. The Pierce Motorette sold well and is served the company well by laying the foundation for the four and six-cylinder models that would further cement Pierces standing at the pinnacle of the automobile industry.This exceptionally rare 1904 Pierce Motorette Model 8M Stanhope is a marvelous well-preserved early motorcar that is VCC dated and a proven veteran of the world-famous London-Brighton Veteran Car Run. It is one of just 600 Pierce Motorettes produced from 1901-1905 and one of approximately 35 known survivors. In addition to its rarity it has a fascinating provenance. In the early 1950s it is understood that the Pierce was part of the Autorama Museum in Hypoluxo Florida. Founded by the famous tenor opera singer and entertainer James Melton the Autorama Museum showcased his impressive collection of important motorcars.After departing the Autorama collection the next owner was A. Atwater Kent Junior son of the founder of the Atwater Kent Manufacturing Company. His family business manufactured high-quality radios and his father held patents for automobile ignition systems including the so-called Unisparker. Mr. Kent later donated the Pierce Motorette to the Pennsylvania Historical & Museum Commission where it was put on display in their museum in Harrisburg PA. In the late 1990s the little Pierce was sold out of the museum journeying across the pond to England where it got a new lease on life at the hands of a dedicated enthusiast Mr. Charles Brown. Brown along with Alan Hancock who maintained the car carefully preserved the Pierce and painstakingly prepared it for acceptance into the VCC with the goal of running it in veteran car tours and events.According to the history file there appears to be some discrepancy as to whether this Motorette was a 1903 or 1904 model; however it is titled and officially dated by the Veteran Car Club of Britain as a 1904 model and includes its Certificate of Date (Number 2264) issued in 1999. Since receiving its certification it successfully completed the London-Brighton run an impressive seven times between 2003-2005 and 2007-2010.More recently this charming Pierce Motorette has been maintained by an active US-based car collector and enthusiast. It presents with an attractive patina and the appealing character of a well-loved event car. The wood body is in good overall condition finished in dark green with cream stripes and black metal mudguards. There are some cracks in the woodwork and plenty of age-appropriate wear yet it manages to be delightfully honest and appealing wearing its patina like a badge of honor. The body features the aforementioned forward-mounted dicky seat which cleverly folds away into an attractively curved cowl when not in use. Accessories include dual Gray & Davis carriage lamps and a matching Gray & Davis tail lamp. Original cast step plates are intact and the seat upholstery remains in very good condition with a consistent patina on both the drivers seat and dicky seat.Pierces robust single cylinder engine sits beneath the driver and is in excellent mechanical condition. It is appropriately presented for a car that gets driven and enjoyed while it benefits from regular maintenance at the hands of its current owner. Records show the engine was thoroughly serviced and it runs with remarkable alacrity.A rare and delightful motor car this charming example of George N. Pierces earliest efforts has a fascinating history with pioneering automobile collectors and it has been enjoyed to the fullest by its recent owners. With official certification by the VCC it is eligible for numerous veteran car events worldwide and is sure to be a crowd-pleaser wherever it takes its next keeper.For additional details please view this listing directly on our website https://hymanltd.com/vehicles/6354-1904-pierce-arrow-motorette/

Note from the publisher:
Welcome to our collector car marketplace where we feature thousands of classified ad listings of vintage cars for sale. We hope that you will bookmark our site and visit often; our cars are updated every day. Furthermore we encourage you to subscribe to our mailing list so that we may periodically notify you of interesting classic cars that become available.
Home > Classic Cars For Sale > Pierce-Arrow > Motorette > 1904 Pierce-Arrow Motorette