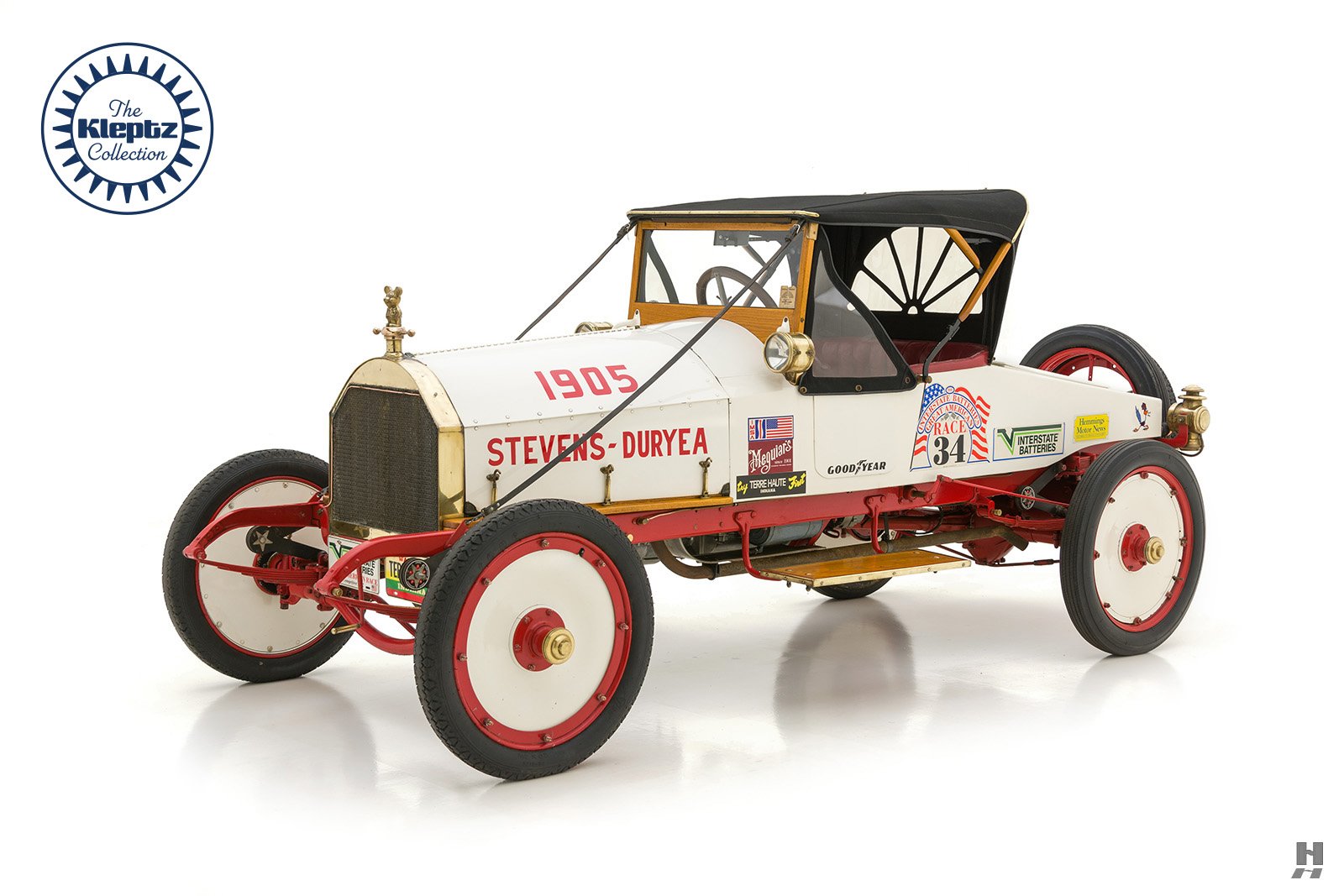 Price: USD $47,500
Among their many varying interests in the world of car collecting Frank Kleptz and his son David were avid competitors in the Great American Race (now known as The Great Race) during its heyday in the 1980s and 1990s. This enormously challenging open road rally is for cars at least 45 years old pitting competitors against the clock the elements and against their own machinery over thousands of grueling miles. This regularity rally requires precision driving timing and navigational skills rewarding drivers who arrived at each checkpoint as close to the allotted time as possible. It also tests the creativity and will of competitors who often have to overcome daunting mechanical challenges just to stay in the race. The Great Race is a test of physical and mental endurance as much as it is a test of driving prowess.The Kleptzs ran the Great Race on numerous occasions and with several different cars sometimes entering more than one in a single year. The rulebook includes a handicap system so the older the vehicle the better ones chances are at victory and a piece of the prize money. For the 1987 race they elected to take full advantage of the handicap system by entering the oldest vehicle in the event this 1905 Stevens Duryea Model R. Before its transformation into a rally car in the early 80s Frank Kleptz bought the Stevens out of the Blue Field at the AACA Hershey fall meet. It had once been part of Barney Pollards collection who kept a veritable hoard of old cars in his barns and outbuildings outside Detroit. At one point he amassed so many vehicles that he stacked them on end to make space!As found the Stevens-Duryea Model R was the ideal candidate for a Great Race car. The original touring body (the only style offered on the four-cylinder Model R) was long gone so it was not viable for a traditional restoration. But it did wear this spartan lightweight speedster body while in the Pollard collection making it a great choice to build into a competitive rally car. The race rules require period-correct components so the Stevens runs a correct 20-hp four-cylinder mated to a 3-speed progressive shift gearbox. The gearbox features a 1:1 3rd gear ratio paired to a 3:1 rear differential. The tall gearing tuned engine and lightweight coachwork allowed the little 1905 Stevens to cruise at 70 mph!Frank Kleptz added several interesting touches for long-distance rallying. These including a nozzle that sprays cooling water on the front of the radiator an auxiliary fuel tank and a twin spare wheel carrier. Theres a generous trunk for spares and luggage along with a folding top and rudimentary side curtains should the weather turn ugly which it usually does on the Great Race. Frank and David completed the build in time for the 1987 event which set off from Disneyland in California with David at the helm. The route following a southern path across Arizona Texas and Louisiana finishing at Walt Disney World in Orlando Florida an epic journey of over 2500 miles. The cheeky mouse radiator mascot is a nod to that event though were not sure if thats Mickey Mouse or Mighty Mouse!The plucky little Stevens Duryea went on to complete a second coast-to-coast run in the Great Race and David reported it was always a dependable and steady runner. It has been several years since the Stevens last turned a wheel in the heat of competition and while the engine has recently been test-fired and found to run quite well additional sorting is required. Once dialed-in and refurbished the small but mighty Stevens Duryea would undoubtedly be welcomed back to the starting line of the Great Race.Offers welcome and trades considered For additional details please view this listing directly on our website https://hymanltd.com/vehicles/6858-1905-stevens-duryea-model-r-great-race-speedster/

Note from the publisher:
Welcome to our collector car marketplace where we feature thousands of classified ad listings of vintage cars for sale. We hope that you will bookmark our site and visit often; our cars are updated every day. Furthermore we encourage you to subscribe to our mailing list so that we may periodically notify you of interesting classic cars that become available.
Home > Classic Cars For Sale > Stevens-Duryea > Model R > 1905 Stevens-Duryea Model R