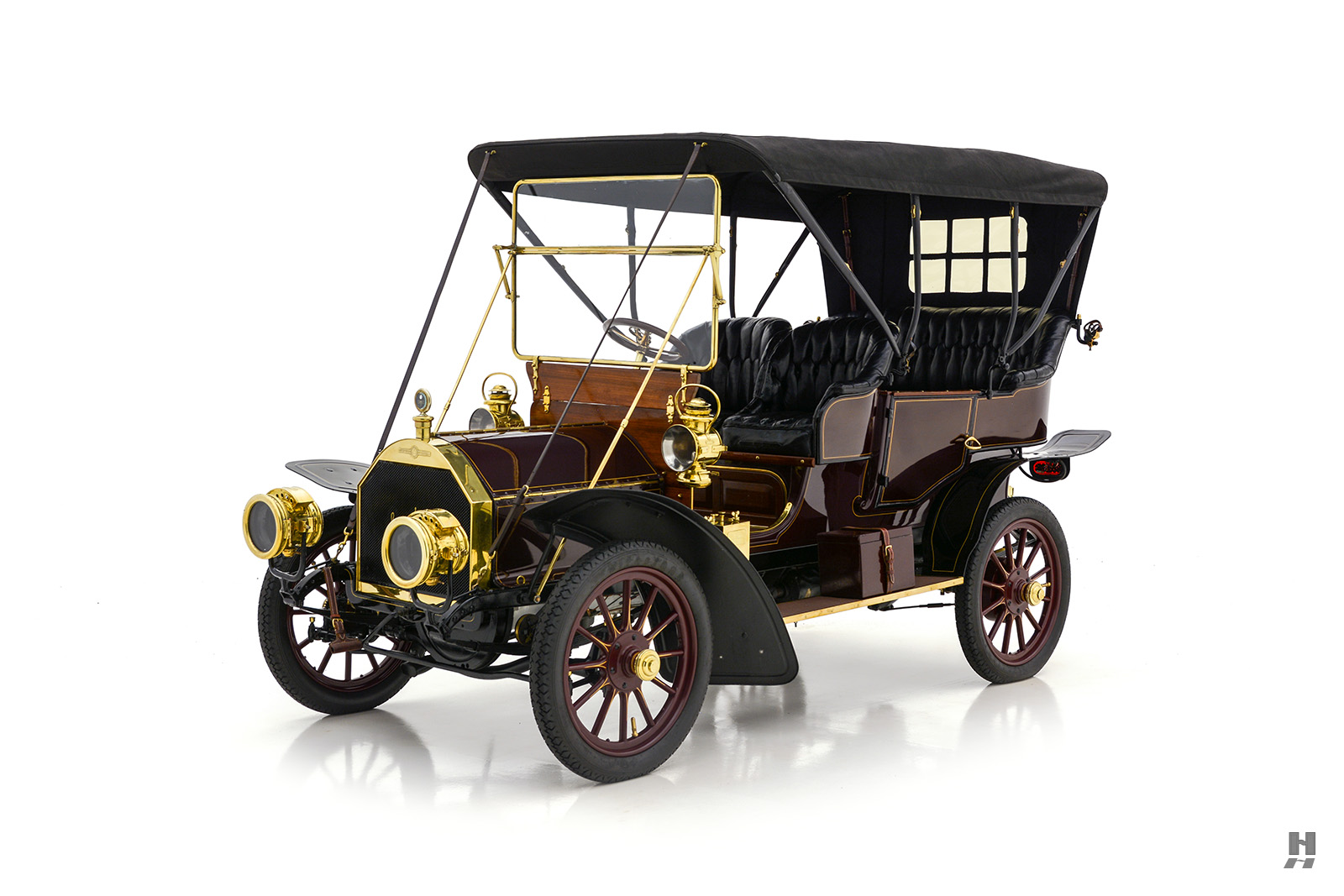 Price: USD $72,500
After parting ways with his brother Charles at the Duryea Motor Wagon Co. J. Frank Duryea set off on his own to form Hampden Automobile & Launch Co. in Springfield Massachusetts. Soon after setting up shop with the very first prototype just completed the J. Stevens Arms & Tool Company acquired a controlling interest in the business and the Hampden car was renamed Stevens-Duryea. The original Hampden prototypes were simple 2-cylinder runabouts with tiller steering selling for around $1200 when refined and sold under the Stevens-Duryea name. Rapid development saw the Stevens-Duryea gain a 20hp four-cylinder engine with unique three-point engine mounting system in 1905 which the company touted as providing superior protection to the drivetrain on rough roads. Period advertising boasted their success at hillclimb events against cars of twice the horsepower output and claimedIn order to get all of your engine power to the rear wheels you must have a STEVENS-DURYEA THREE POINT SUSPENSION.As early as 1906 Stevens-Duryea offered both four and six cylinder models that helped the company quickly move up market. The range-topping 1906 model S was a 50hp model powered by a colossal 9147cc six. It shared the catalog with the 20hp Model R four-cylinder and from 1907 a 30/35hp light six Model U. The light four-cylinder runabouts remained in the companys portfolio for some time but the majority of the production was of the larger six-cylinder touring cars and limousines. By 1915 financial troubles had struck and despite selling off the armament side of the business to raise capital the bankers came knocking and demanded Frank Duryea build less expensive models if he were to receive any more capital a condition that he refused to accept. As a result the plant was sold to Westinghouse to support domestic efforts for World War I.Following the war in 1919 a group of former employees led by Ray S. Deering bought the rights to the Stevens-Duryea name and revived production. Incidentally Mr. Deering later went on to purchase Rauch and Lang makers of electric cars. Unfortunately for Mr. Deering the refreshed and updated version of the old Model S was not enough to keep the business afloat especially considering inflation caused the price to climb to an astounding $9500 in 1920. As a point of reference a Continental Mk II was Americas most expensive car costing $10000in 1956. Stevens-Duryea entered receivership in 1922 emerging only to build cars to special order until 1927 at which time the doors were closed on this fascinating and prestigious early American marque.This 1906 Stevens-Duryea Model R is a very fine and well-preserved example of Duryeas first four-cylinder car. Believed to be one of just a handful left in existence it was restored to a high standard some time ago remaining very well presented and attractive. The aluminum body is finished in deep burgundy which repeats on the wheels and chassis and is contrasted with black mudguard-style fenders. Quality of the finish is excellent the older restoration showing just a little wear.This handsome touring car stems from the height of the Brass Era so there is plenty of beautifully polished brightwork to enjoy. At the front E&J Lamps light the way and are backed by a brass honeycomb radiator. Brass cowl lamps are fitted as well as a brass folding windscreen brass dash panel and cockpit trims. Perched up in the black button-leather drivers seat the chauffeur is treated to a Stewart and Clark clock brass oil level sight and a Stewart speedometer. Thankfully Duryea eschewed the complex planetary transmission for a simple and user-friendly sliding gear unit requiring only patience and timing to select gears. Rear passengers enjoy doors (there was after all a rather different view of luxury motoring 100 years ago) and a black canvas convertible top should the weather turn afoul. The large bucket seats are beautifully trimmed in black leather with correct button-style pattern.The four cylinder engine as fitted to the Model R was the first for Stevens-Duryea and it produced a rather respectable 20hp for the period. Our example is pleasingly well-detailed in very sound order and ready for enjoyment. Period details such as the wood coil box and Rushmore Dynamo remain intact. The car has been set up for touring with the addition of a starter-generator a distributor and modern taillights mounted below the rear fenders. This handsome and rare Model R tourer is a fascinating and very well-preserved example from this storied American company. The history of the Duryea brothers go back to the very dawn of the automobile and the cars they produced both together and separately are significant and important pieces of American motoring history.Offers welcome and trades consideredFor additional details please view this listing directly on our website https://hymanltd.com/vehicles/6756-1906-stevens-duryea-model-r-touring/

Note from the publisher:
Welcome to our collector car marketplace where we feature thousands of classified ad listings of vintage cars for sale. We hope that you will bookmark our site and visit often; our cars are updated every day. Furthermore we encourage you to subscribe to our mailing list so that we may periodically notify you of interesting classic cars that become available.
Home > Classic Cars For Sale > Stevens-Duryea > Model R > 1906 Stevens-Duryea Model R