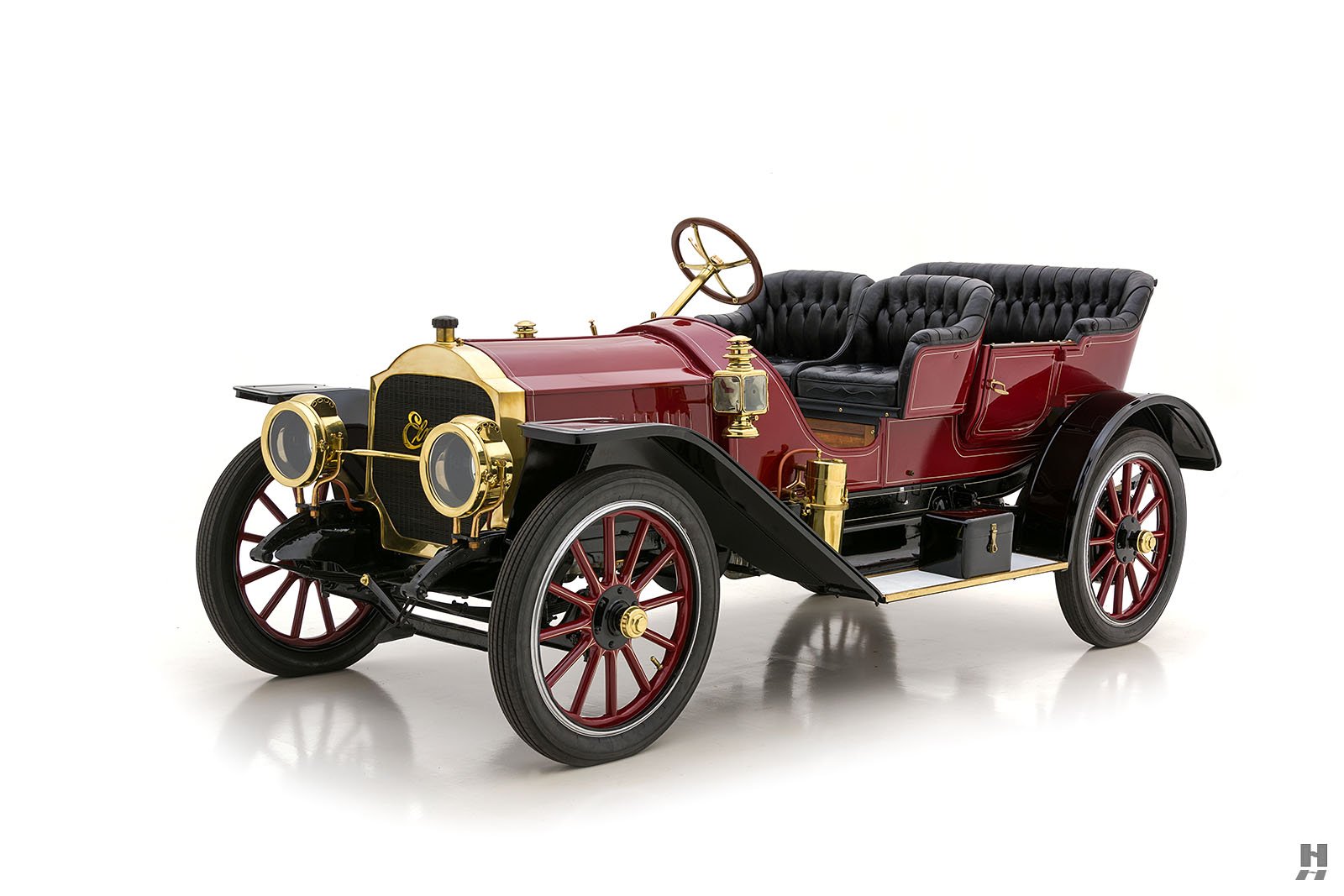 The Elmore is a curious footnote in the annals of American automotive history. Based in Clyde Ohio the company was founded by brothers James and Burton Becker in 1902. Like many in the pioneering days of the horseless carriage the Beckers got their start in the bicycle business before gradually moving into motorized transport. Their first car produced in 1900 featured a single-cylinder engine mounted in the middle of the chassis. They built about ten cars before incorporating Elmore Manufacturing Company in 1902 the name borrowed from a parcel of land where their father operated a stave mill. On the surface the Beckers were just like hundreds of other starry-eyed young entrepreneurs vying for their part of this burgeoning market. But Elmore stood apart as one of the earliest adopters of the two-stroke engine and staunchly defended its merits for the entirety of the companys existence.Early advertisements touted the Elmore asthe only two-cylinder motor in the world that can be started without cranking!and all subsequent Elmore marketing featured the taglinethe car that has no valves.The Becker brothers were vehement evangelists for their chosen technology and to their credit did not waver in their support of it despite doubting critics in the press. From 1902 through 1905 Elmores offered either single or two-cylinder engines mounted amidships in the chassis. By 1906 Elmore introduced a redesigned model with a front-mounted engine and either a three or four-cylinder layout. The cars grew in size and power output from 24 to 36 horsepower and they even listed a 70-horsepower tourer in 1911! Admittedly the power outputs were estimated and were probably considerably underrated due to the 2-stroke engines nature. Sales were steady though never stellar and annual production peaked at 648 units 1908 thanks in large part to the three-cylinder models popularity as a taxicab.The novelty of Elmores engine technology caught the eye of Billy Durant the infamous founder of General Motors. While on one of his notorious buying sprees he purchased the Elmore company from the Becker brothers in 1909 reportedly for a generous sum of $500000. Unfortunately joining the GM empire did not help Elmores fortunes and the company was dissolved after 1912 in the wake of Durants tumultuous ouster from GM by the board of directors.As one of only a few known survivors of the fascinating American marque this 1910 Elmore Model 46 Demi-Tonneau provides a glimpse back to the early days of motoring when engineers bristled with creative experimentation. The Model 36 features a 254.4 cubic-inch four-cylinder two-stroke engine nominally rated for 36 horsepower although the few who have experienced an Elmore suggest they were underrated. In the mid-1960s this car was discovered in Altoona Pennsylvania by Mr. Al Shaw. Then owned by an older man named A. McIntyre the car was tucked in a shed for many years and the history file includes a 1928 Pennsylvania registration in his name.As is the duty of any self-respecting car enthusiast Al Shaw offered to buy the Elmore but McIntyre wanted none of it. Shaw stayed in touch but it wasnt until 1971 that he got a call from the McIntyre family informing him the owner had died and the Elmore was available.Shaw made a deal to buy the car which was remarkably complete but needed a full restoration. An engineer by trade Al painstakingly worked his way from end to end on the Elmore making new parts as required including casting new aluminum pistons and restoring the crankshaft. Aside from fitting an electric starting system for ease of operation Al otherwise restored the car quite faithfully to period-correct specification. Finally after years of meticulous research and labor Al Shaw declared the restoration complete in 2009.A few years ago the Elmore changed hands joining the most recent owners collection. During that time it has been well maintained in excellent condition and its lovely presentation is a testament to the quality of Mr. Shaws restoration work. The body is finished in an attractive shade of maroon accented with black fenders a black chassis and plenty of highly polished brass accessories. Black button-tufted leather upholstery completes the authentic looks and like the bodywork it is in outstanding condition.Mechanically the Elmore is relatively straightforward. The inline-four feeds a conventional 3-speed sliding-gear transmission and a Buick-sourced rear differential. Typical for the era brakes are fitted to the rear wheels only supplemented by a transmission brake. With such a sizeable 2-stroke engine the Elmore is quite a performer and previous owners have claimed 50 mph is easily achievable. It is allegedly capable of higher speeds though nobody has quite had the bravery to cut it loose! Even at a moderate pace the lack of a windscreen or weather equipment enhances the sense of speed giving the authentic bugs-in-the-teeth experience that makes driving a brass-era motorcar so massively entertaining.Included in the sale are numerous photos of the restoration correspondence and research related to the Elmore company period documents and more. With survivors of the Elmore marque numbering in the single-digits this charismatic and beautifully restored Model 36 Demi Tonneau represents a rare opportunity to acquire one of the finest examples extant.Offers welcome and trades consideredFor additional details please view this listing directly on our website https://hymanltd.com/vehicles/6775-1910-elmore-model-36-demi-tonneau/

Note from the publisher:
Welcome to our collector car marketplace where we feature thousands of classified ad listings of vintage cars for sale. We hope that you will bookmark our site and visit often; our cars are updated every day. Furthermore we encourage you to subscribe to our mailing list so that we may periodically notify you of interesting classic cars that become available.
Home > Classic Cars For Sale > Elmore > Model 36 > 1910 Elmore Model 36