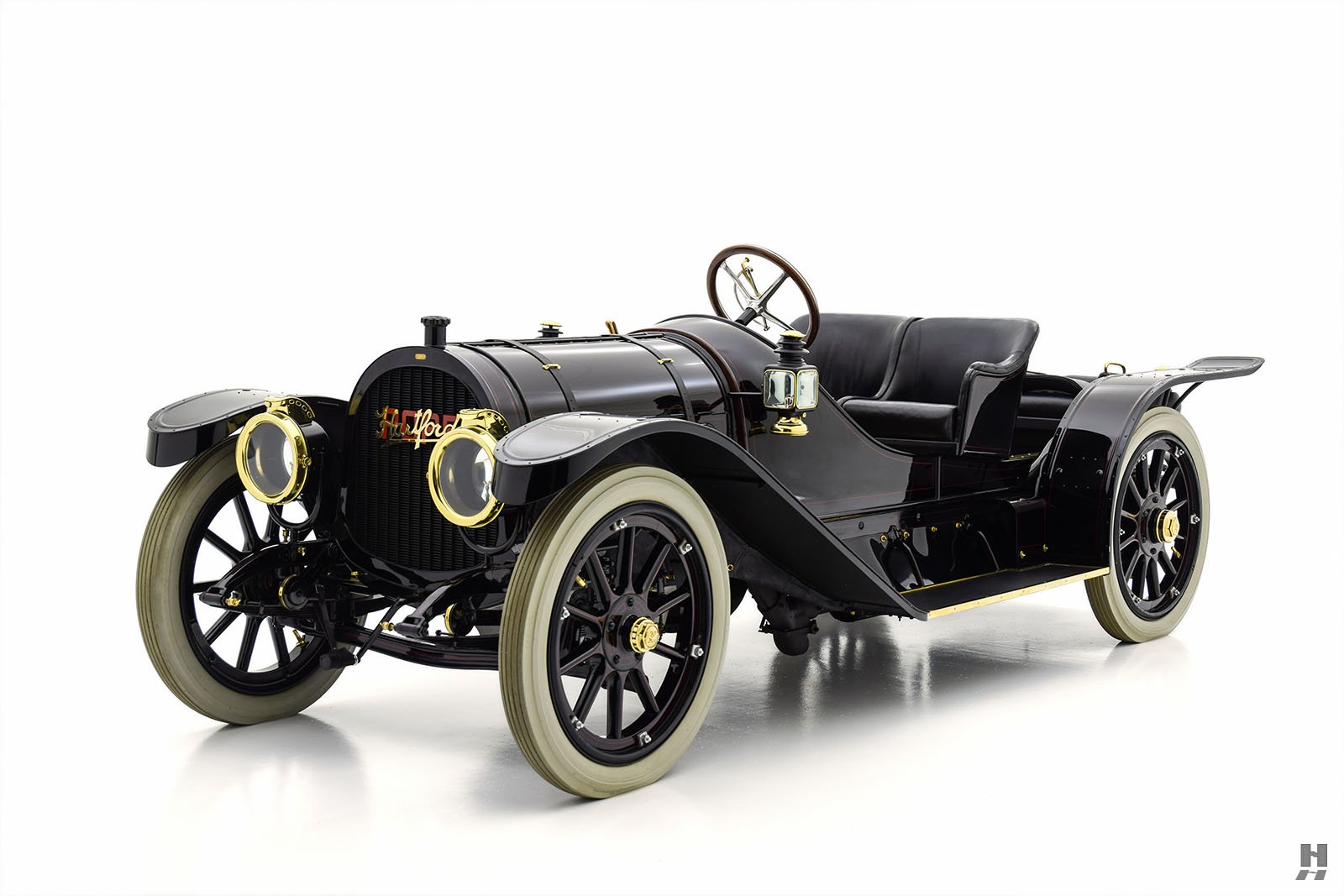 Price: USD $415,000
The Pope automobile empire had its beginnings in Boston following the Civil War when Col. Albert A. Pope established the Pope Manufacturing Company which focused primarily on building patented items for other companies. Wheeled transport soon followed with Pope-branded bicycles. The bicycle business would set Colonel Pope on the path to an industrial empire when in 1899 he created the American Bicycle Company which was a conglomeration of some 45 bicycle companies a General Motors of bicycles of sorts. As the American bicycle craze settled down Pope moved on to motorized transportation with his first car sold under the Columbia name which was shared with his premier bicycle brand. Numerous other Pope-emblazoned cars would follow such as Pope-Toledo Pope-Robinson Pope-Tribune and Pope-Waverly. Some brands focused purely on entry-level offerings while the cars like the Pope-Hartford offered a high level of prestige. Not only was it among the most prestigious of the multiple Pope brands (second only to the Toledo) but the Pope-Hartford was also the longest lasting surviving from 1904-1914.In 1911 two models were offered by Pope-Hartford the Model W and the Model Y. The model W was powered by a huge 450 cubic inch four-cylinder engine that was rated for 50 horsepower which incidentally matched the output of the six-cylinder Model Y. Most of the bodies offered were of the multi-passenger type such as the 7-passenger touring limousine and tonneau. For buyers wanting a bit more performance Pope offered the Club Roadster also known as the Portola to commemorate Jack Flemings famous win at the inaugural Portola road race in Oakland CA in 1909. The Portola roadster was a sparse cut-down speedster with a unique feature of two rear jump seats that could be swapped out for a flat deck with a pair of spare wheels for racing. The Portola Roadster was fast reliable and proven in competition. Its engine featured internal upgrades such as lightweight tubular pushrods a forged crank more aggressive cam and lightened rods and pistons. While Col. Pope was never a fan of motor racing he did recognize its marketing value and even backed a handful of factory entrants. Several works and private racers were built using the Portola Club Roadster as a basis achieving outstanding results and setting numerous speed records along the way.This breathtaking 1911 Pope-Hartford Model W Portola Roadster is a stunning example of Brass Era performance motoring exquisitely restored by the respected Stu Laidlaw of Redding Connecticut. Finished in gleaming black with burgundy coach stripes this Pope is truly stunning in every respect; an imposing machine with incredible presence. Little is known of its earliest history though it is understood that this Model W resided in the Harrah collection in the 1970s before it was sold and restored in the 1980s eventually joining the collection of well-known Brass Era collector Dick King. It is believed the body is a reconstruction of the original built atop a genuine Portola engine and chassis. After its time with Dick King the Pope-Hartford was passed to another passionate brass-era enthusiast who continued to show and enjoy the car as it deserved.Still appearing fresh and impeccably detailed the black bodywork is finished to concours-quality standards with outstanding paintwork on the chassis and body components. The wooden cowl boards are exquisitely finished like fine antique furniture. The frame-mounted fuel tanks and gloss black patent-leather skirts between the body and running boards help give the Pope its low-slung appearance despite those massive 36 wheels. Accessories include Pope-Hartford branded Gray & Davis headlamps Gray & Davis cowl lamps and numerous beautifully restored brass fittings. Instrumentation is via a Warner speedometer and clock while a separate gauge monitors fuel pressure which is boosted via a hand pump between the seats. Running boards and floors are finished in period appropriate linoleum panels and the seats are beautifully trimmed in black leather showing virtually no signs of use since the restoration was completed in 2011. The sale will include both the jump-seat rear deck as well as the spare-wheel carrier which can be changed over for the full road-racer effect.As with the rest of the car the detailing on the mighty 450 cubic-inch 7.4 liter T-head four cylinder is impeccable. It is in excellent mechanical order throughout showing only light use on the undercarriage since its restoration. The chassis is as beautifully presented as the bodywork with fine quality paint and painstakingly striped frame springs and front axle. Upon completion this outstanding Pope-Hartford was honored with a coveted Best in Show at the 2011 Rolex Sunday in the Park Concours part of the Lime Rock Park Historic Festival. It has also earned a class win (Horseless Carriage 40+ Horsepower) at the prestigious Amelia Island Concours dElegance in 2012. It has continued to impress in the hands of its most recent owner a passionate brass car enthusiast.The racy Pope-Hartford Portola encapsulates the thrilling days of Brass Era competition when daring drivers fought for glory in grueling conditions pushing their potent machines to the limits of what was thought possible of both man and machine. Deeply impressive and with incredible road presence this example is an exquisitely restored motorcar that would be a thrilling entry in road events and welcome at virtually any concours worldwide.For additional details please view this listing directly on our website https://hymanltd.com/vehicles/6182-1911-pope-hartford-model-w-portola-roadster/

Note from the publisher:
Welcome to our collector car marketplace where we feature thousands of classified ad listings of vintage cars for sale. We hope that you will bookmark our site and visit often; our cars are updated every day. Furthermore we encourage you to subscribe to our mailing list so that we may periodically notify you of interesting classic cars that become available.
Home > Classic Cars For Sale > Pope-Hartford > Model W Portola > 1911 Pope-Hartford Model W Portola