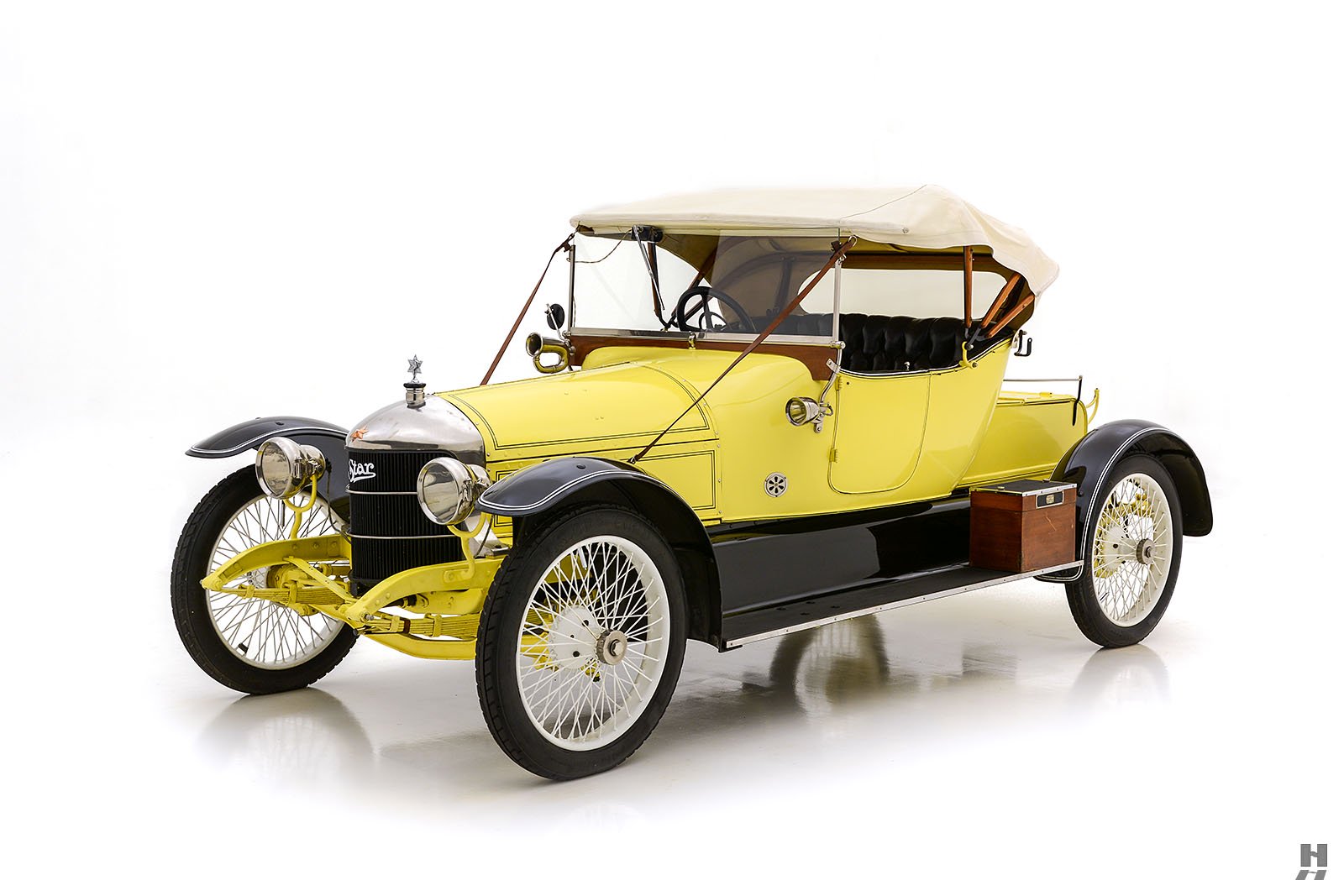 Price: Contact Seller for Price
The Star Engineering Company of Wolverhampton Staffordshire was for a brief time a significant player in the British motor industry. Founded in the late 1800s Star like many early automobile companies evolved from cycle manufacturing into automobiles. The earliest Stars relied on outside designs from the likes of Benz and others. But instead of merely assembling outside parts and components Star manufactured nearly every part in its factory. With that kind of manufacturing experience it was only natural that the company moved on to produce cars entirely of its own design. In 1909 Star introduced its most successful model the Fifteen. A conventional vehicle with four-cylinder engines ranging from 3 to 3.5-litres the Fifteen was named for its taxable horsepower rating and was offered with a wide variety of body styles primarily built by Stars respected in-house body shop. The Fifteen was highly regarded for its quality construction performance and comfort. Beyond the Fifteen Star also offered a 6.9-litre six-cylinder and a gargantuan 7.7-litre four but they were built in comparatively tiny numbers.Star grew steadily in the years before and immediately after The Great War and briefly enjoyed being Britains sixth-largest motor manufacturer. Unfortunately for Star their competition evolved rapidly in the late twenties and into the thirties. Conservative management and a cramped outdated factory led to lagging sales and financial losses. The final new model to arrive was the 1931 Comet which only lasted one year before production halted abruptly. Curiously the final entry in the order books was for an 1898 Star-Benz preserved and displayed in the company lobby for 34 years and sold to a buyer in Birmingham for just 5.Despite their success Star is a little-known marque outside Britain and exports were primarily limited to British colonies like India Australia New Zealand and in Africa. This immensely charming 1913 Star Fifteen Gentlemans Roadster is likely one of the only examples of the marque in the United States and just a handful of surviving export models. It is a wonderfully appealing motorcar that spent the past thirty-six years in one familys care and with a history going back to the 1950s when it was discovered in Otago on New Zealands South Island. Because the export markets had considerably warmer climates than England Star modified export cars with the pointed bullnose radiator to increase cooling capacity as equipped on this example. Another fascinating detail is this cars two-passenger Gentlemans Roadster body which carries a coachbuilders tag from Stuart of Wolverhampton. While the vast majority of Stars wore factory coachwork a shop fire necessitated the services of outside coachbuilders when this car was built.According to the most recent owner this Star was discovered in 1953 and treated to a restoration soon after. Documents show it was re-registered in New Zealand by Arthur Stanley Atkinson in 1958. Mr. Atkinson enjoyed the Star for about ten years before selling it on. It changed hands a couple of times through the early 1980s before finding a home in a private auto museum. In 1984 an American Pan Am pilot on a weekend layover in Auckland visited the collection and fell in love with the Star. The American visitor had no intention of buying a car when he visited the museum but the flame was lit when the owner mentioned he was selling some cars to cover his debts. A deal was quickly done and in March 1984 the Star Fifteen had a new American owner.After making the trek stateside via a Pan Am 747 cargo plane the Star settled into its new home on the West Coast. While still as-restored in the 1950s it was in excellent running condition thanks to 30-plus years of regular use on numerous Vintage Car Club of New Zealand tours. The Star was used regularly for family outings picnics and occasional show events in the San Francisco area with its new owners. At the time of its restoration it was fitted with more sporting wire wheels in place of the original wood wheels and updated with a self-starter dynamo and electrical system possibly from a later model Star Fifteen which made the car noticeably more user-friendly.Cherished by the same owners since 1984 the Star Fifteen roadster remains as charming as ever presented in an attractive shade of pale yellow over black wings. The sporty and stylish coachwork is well-built with unique features including an occasional rear seat and a sliding luggage rack built into the trunk. The finish displays a well-earned patina from years of steady use and care with a wonderfully inviting character. The wire wheels wear period-appropriate Dunlop tires and accessories include dual cowl lamps a single side-mount spare and a wicker picnic hamper. Aside from the electrical system updates made in the 50s the only other deviation from standard spec is the addition of an electric fuel pump to help feed the engine at higher speeds.A 1998 feature in British Car Magazine praises this Star for its superb road manners and remarkable refinement from the 3-litre engine and four-speed gearbox. The owner reported easily achieving 50 mph in 3rd gear with one more cog left to go. It is sure to bring joy to its next caretakers much as it has for the past thirty-six years. Rare and wholly delightful this marvelous Star Fifteen is ready for the next chapter in its long and fascinating story.Offers welcome and trades consideredFor additional details please view this listing directly on our website https://hymanltd.com/vehicles/6734-1913-star-fifteen-roadster/

Note from the publisher:
Welcome to our collector car marketplace where we feature thousands of classified ad listings of vintage cars for sale. We hope that you will bookmark our site and visit often; our cars are updated every day. Furthermore we encourage you to subscribe to our mailing list so that we may periodically notify you of interesting classic cars that become available.
Home > Classic Cars For Sale > Star > Fifteen > 1913 Star Fifteen