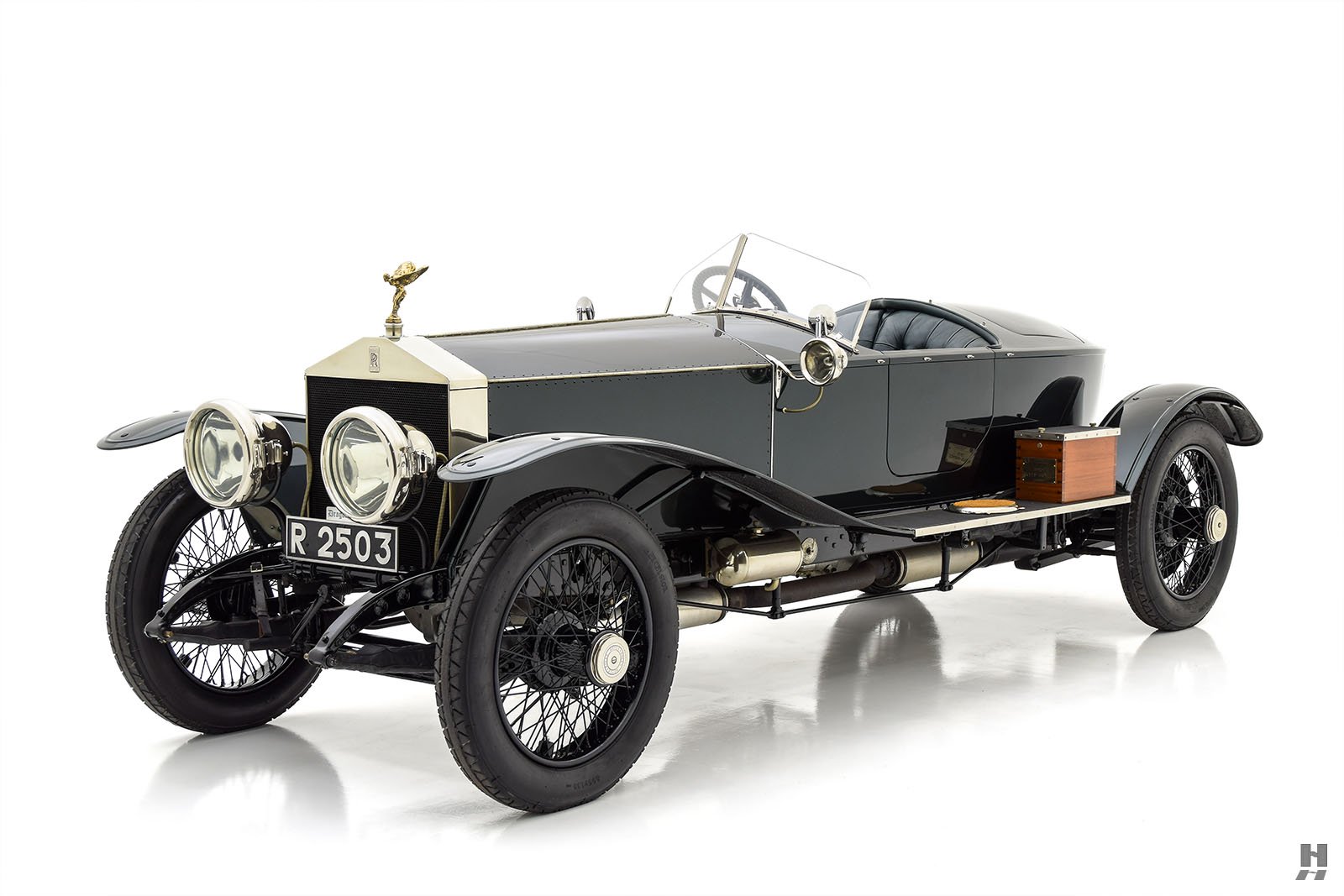 Price: USD $750,000
Upon its debut in 1907 the Rolls-Royce 40/50 horsepower Silver Ghost was considered to be the most advanced motorcar money could buy. With Henry Royces impressively over-built 7428cc side-valve inline six-cylinder engine as the centerpiece the Silver Ghost was a true engineering marvel representing a great leap forward in automobile design. The impressive engine was both incredibly strong yet was also lightweight thanks to the extensive use of aluminum alloy particularly in the large crankcase. While competitors struggled to achieve reliability due to their long flexible crankshafts; Royces design utilized a crank that was shorter stronger and supported by seven oversize main bearings. At the factory Rolls-Royce mechanics assembled the 40/50hp with unprecedented levels of precision finely fitting each component and hand-polishing mating surfaces to ensure smooth and smoke-free operation a characteristic that was virtually unheard of for the time. Features such as pressurized oiling fixed heads to eliminate leaks and a twin ignition system via magneto or distributor were advancements that established the Silver Ghost as the world standard for fine motorcars.Of course the Ghost was more than just the engine; the chassis was similarly overbuilt to withstand virtually any abuse an owner could throw at it. Given its remarkable durability a Silver Ghost 40/50hp chassis would often outlive its original body sometimes several times over. It is a true testament to the quality of these cars that a vast majority of the approximately 6500 Silver Ghosts built over its 18 years in production still survive today. Even as many Silver Ghosts have surpassed the century mark a global community of dedicated aficionados continues to enjoy them as intended on the road and few veteran cars can match the experience of piloting a mighty Silver Ghost.Our featured 1915 Silver Ghost is chassis number 30ED a mid-production G-Series model fitted with unique and striking coachwork. Nicknamed Dragonfly as much for its purposeful styling as its iridescent green paintwork this fabulous motorcar is built with a focus on spirited driving. Beautifully finished and detailed 30ED is an alluring prospect for any enthusiast seeking a rapid and exciting machine for veteran car touring. Documents provided by the current owner as well as the Rolls-Royce Foundation reveal that chassis 30ED has led a rich and fascinating life. Interestingly the file includes two factory invoices the first showing the car initially slated to receive Barker coachwork for a member of the Nobel Family in Russia. For unknown reasons that order was canceled and a second invoice shows the car was sold on August 9 1916 to a Mr. Loewenstein. Equipped with limousine coachwork and registered R2503 this Silver Ghost traded hands among various English and Welsh owners into the late 1920s. By the 1930s the car made its way to the city of Tangiers Morocco. As is typical with many Ghosts the chassis had already outlived the coachwork and later in the decade it was still in Morocco serving as a breakdown recovery vehicle!By the 1960s 30ED was in France and reportedly configured as a torpedo-style tourer. It was sold via a Christies auction in 1970 and returned to England after that. In 1978 Mr. John E. Tanner mated an existing Melhuish & Co. Canopy Brougham body to the chassis and continued to enjoy the car. The current configuration is courtesy of Mr. H.J.T. Channing of Guernsey England who acquired 30ED in 1993. In 1998 he commissioned a full restoration and the construction of this marvelous Skiff-inspired dual-cockpit coachwork. Mr. Channing showed the car in England and seemed to have used it in Veteran Car Club events as it proudly displays its V.C.C. registration plate. Channing sold the Ghost to noted American Rolls-Royce enthusiast Don Meyer in 2005 who imported it to the USA. The current owner acquired the car from Meyer shortly after that and has continued to care for and cherish it as part of his extensive collection.Rakish and sporty the 2/4 passenger twin-cockpit skiff body is beautifully constructed in the finest English coachbuilding tradition. Framed in wood and skinned in aluminum the body is wonderfully proportioned. The cut-down cockpit boattail treatment and long bonnet give the Dragonfly a speedster-like quality. The quality of the craftsmanship is outstanding and lovely details abound particularly around the drivers compartment with its subtle scalloped treatment and gracefully arched rear deck panel. The dark opalescent green paintwork is in excellent condition laid down on straight crisp panels. Complimentary green leather upholstery presents with an inviting character from use. The same materials repeat in the rear dicky seat which allows room for two additional passengers. Aside from looking marvelous the purposeful coachwork no doubt offers a handy weight saving lightening the load on the 7.4-liter inline-six and letting the Dragonfly live up to its evocative looks.Mechanically the Dragonfly is in top health. The chassis is clean and detailed appearing well-maintained and very tidy. Showing engine number 1.U (matching the Schoellkopf card) the big six is in excellent condition and presents with a pleasing patina from use and care. Under the stewardship of the current owner Silver Ghost expert Steve Litton updated the car with an electric starter amplified ignition and air cleaner assembly to ensure smooth reliable running on tour. Now ready for touring and veteran car events the world over the Silver Ghost 30ED or Dragonfly if you prefer will no doubt provide its next keeper with many miles of thrilling open-air motoring.Offers welcomed and trades consideredFor additional details please view this listing directly on our website https://hymanltd.com/vehicles/6412-1915-rolls-royce-silver-ghost-skiff/

Note from the publisher:
Welcome to our collector car marketplace where we feature thousands of classified ad listings of vintage cars for sale. We hope that you will bookmark our site and visit often; our cars are updated every day. Furthermore we encourage you to subscribe to our mailing list so that we may periodically notify you of interesting classic cars that become available.
Home > Classic Cars For Sale > Rolls-Royce > Silver Ghost > 1915 Rolls-Royce Silver Ghost