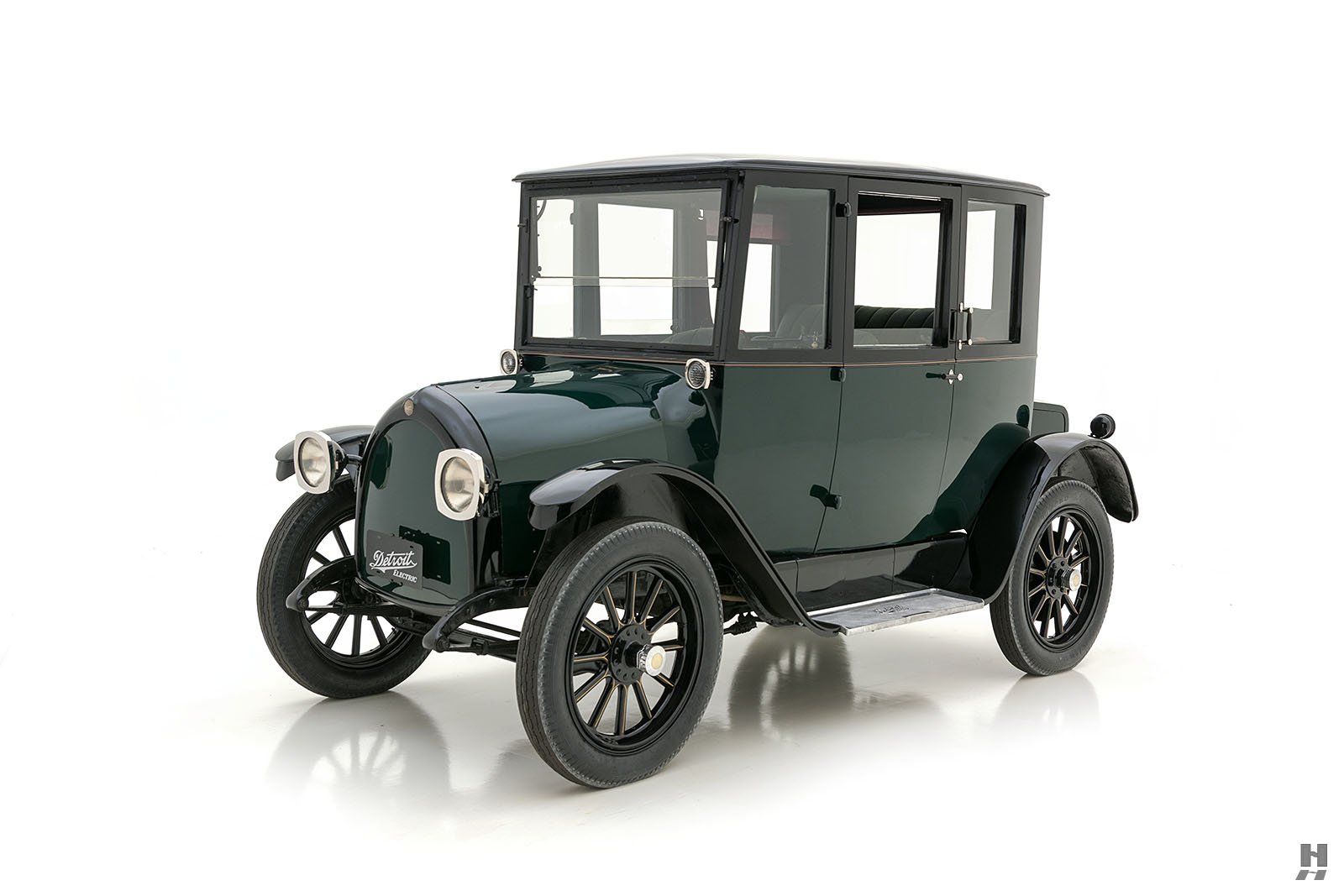 Price: USD $69,500
With roots going back to approximately 1907 Detroit Electric grew to become the longest-surviving car company dedicated exclusively to battery power. Before adopting the name Detroit Electric the firm was known as the Anderson Carriage Company and they were among the earliest champions of battery power for their line of lightweight city cars. After incorporating as Detroit Electric the company enjoyed strong sales throughout the teens and into the twenties peaking at nearly 5000 vehicles per year. Detroit Electrics were widely regarded as high-quality automobiles with multiple chassis and body options including several different open touring cars and even a sporty underslung roadster predating the Tesla Roadster by about a century! By the mid-teens the bulk of Detroit Electric production comprised of fully-enclosed coupes broughams and sedans to best suit their customer base of predominantly well-off city-dwellers who appreciated the Detroit Electrics smoke-free running and easy operation particularly in the days before the self-starter.Because of the relative simplicity of electric power not much changed on the cars mechanically for the entirety of production. That also meant Detroit Electric was slow to evolve their styling to make the vehicles appear more conventional. The catalog often had a dizzying array of models and body styles yet the overall appearance of Detroit Electrics remained unchanged from the teens through the early thirties. It wasnt until they began purchasing bodies from Willys and Dodge that the Detroit Electric look finally evolved. As electric car sales dwindled in the face of improvements in petrol power the focus turned to commercial vehicle production. However passenger cars continued to be offered on a special-order basis and it is believed that they were still being built as late as 1939.This 1921 Detroit Electric Model 85A is a rare and unusual example featuring handsome brougham coachwork and a rarely seen false bonnet/radiator treatment. Handsomely presented in a two-tone black and green livery it is the subject of a well-maintained older restoration and it is the only surviving Model 85A known to marque historians. The body is in excellent order and its front-end treatment shows one of Detroits earliest attempts to build a more conventional appearing car. The coachwork is in very good order the high build quality reflected in its straight panels and excellent fit while the paintwork is glossy and attractive all around with only minor imperfections noted on close inspection. Details include straw-colored coach lines unique rectangular bezels on the head and cowl lamps and nickel grab handles and wheel caps.Like many Detroits of the era the spacious cabin has a parlor-like atmosphere with an overstuffed bench in the rear and a swiveling front passenger seat so occupants can chat face-to-face while motoring silently along. This cars green velour upholstery displays a bit of wear and fading in the fabric yet it retains a charming character. Detroit was one of the last holdouts of tiller steering long after the wheel became the industry standard. This 1921 model is no exception with tiller-based controls for steering and throttle and a foot-pedal operated brake. Instrumentation monitors volts amps and speed so theres little need for a bulky dashboard.The beauty of early electric cars like this Detroit lies in their mechanical simplicity. Theres a big electric motor driving the robust rear axle mechanical rear brakes and thats about it. There are no cooling or fuel systems to service and they are remarkably reliable machines. This example has been renewed with fresh batteries in the front and rear compartments and had new contacts installed for the drive controls which provides four forward speeds.Piloting a Detroit Electric is a uniquely enjoyable experience humming along in near silence with its relative simplicity providing a fascinating counterpoint to todays tech-laden hyper-advanced electric luxury cars. This charming example has the added cachet of being the only known survivor of its type and would be a welcome addition to any diverse and eclectic collection of autos.Offers welcome and trades consideredFor additional details please view this listing directly on our website https://hymanltd.com/vehicles/6774-1921-detroit-electric-model-85a-2-dr/

Note from the publisher:
Welcome to our collector car marketplace where we feature thousands of classified ad listings of vintage cars for sale. We hope that you will bookmark our site and visit often; our cars are updated every day. Furthermore we encourage you to subscribe to our mailing list so that we may periodically notify you of interesting classic cars that become available.
Home > Classic Cars For Sale > Detroit Electric > Model 85A > 1921 Detroit Electric Model 85A