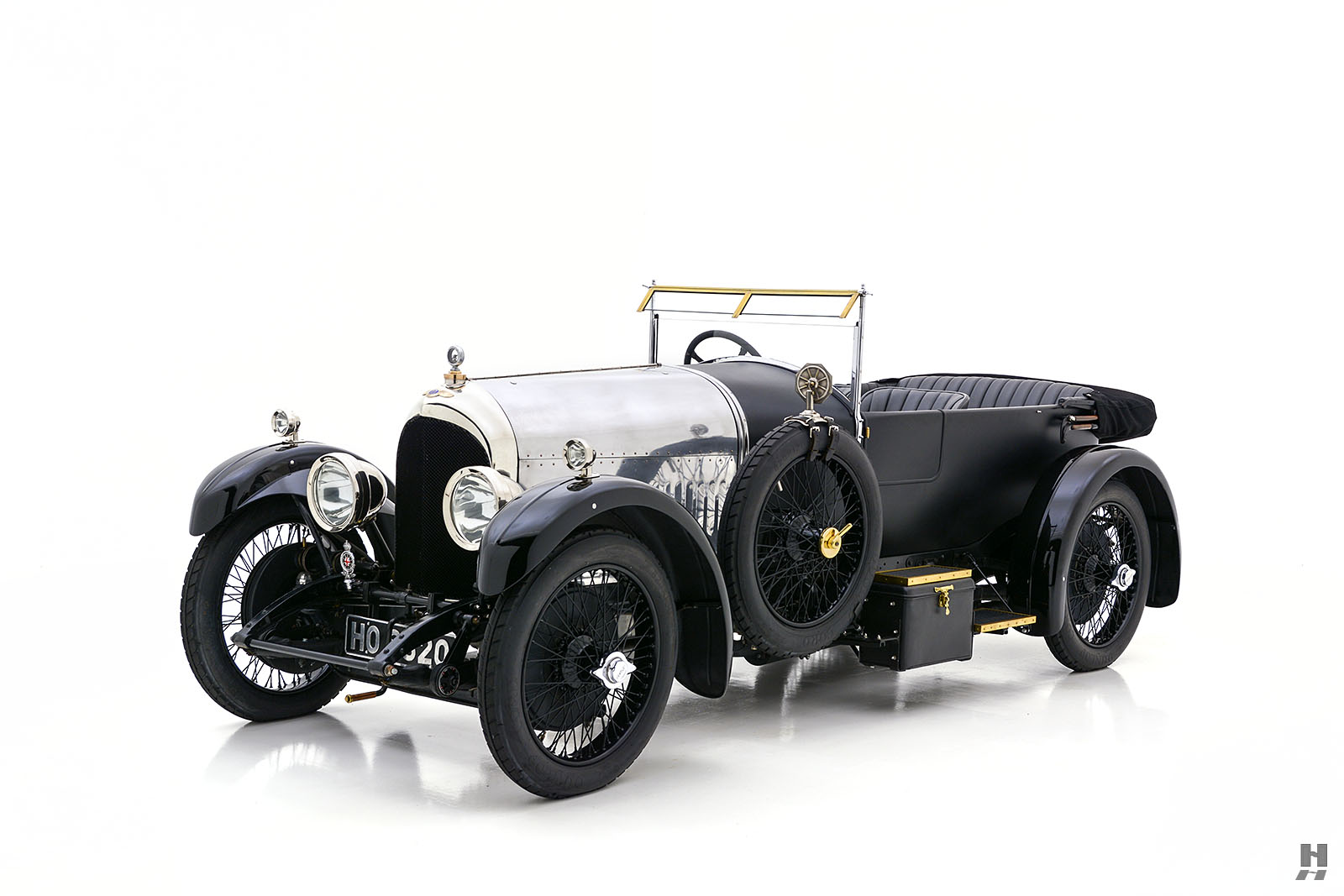 At the foundation of W.O. Bentleys enduring legacy sits Bentley Motors first production model the rugged high-performance 3-Litre. The very first prototype sprang to life in Bentleys Cricklewood workshop in 1919 and soon the company had a demonstrator on the road. By 1921 production began with customers taking delivery of their magnificent new Bentley sports cars soon after. Motor racing always played an essential role in the development of most early Bentleys and the 3-Litre was no exception. In the hands of works drivers and privateer sportsmen alike the stout 3-litre four-cylinder was soon taking top honors at prestigious racing circuits around the world. Within a few short years a 3-Litre model brought Bentley its first outright victory at the LeMans 24 hour race followed by another win in 1927 and the streak lasting until 1930. For a motorcar manufacturer founded just a few short years prior those results were quite astonishing.At the heart of the 3-Litre sits W.O.s superb inline four-cylinder engine. The highly advanced power plant features four valves per cylinder pent-roof combustion chambers overhead camshaft and twin plug ignition with redundant magnetos. The cars were not only powerful but incredibly robust and well-built with a light but durable chassis that could handle whatever abuse that was thrown at it. The 3-Litre proved to be an incredibly versatile machine as Bentley gradually offered optional chassis lengths and equipment for touring or racing with bodies (most by Bentleys favored coachbuilder and neighbor Vanden Plas) built to suit. Today these early Cricklewood Bentleys are highly prized for their spirited performance indomitable build quality and enduring competition legacy.Our featured 3-Litre is chassis number 103 a very early-production Short Chassis model recognized as one of the oldest surviving W.O. Bentleys in existence. Beautifully restored it retains its original engine and wears authentic Vanden Plas four-place open touring coachwork. According to information provided by the respected marque expert Dr. Clare Hay Chassis 103 was likely delivered on or around August 4th 1922 fitted from new with similar four-place open touring coachwork by Vanden Plas. Record-keeping at Bentley in the early days was spotty at best and production records of this particular chassis do not exist. However the factory began keeping detailed service records in 1923 and by June of that year information regarding chassis 103 appears in those ledgers which helps piece together the earliest history of this fascinating motorcar.Based on the entries in the service ledger experts believe the original owner was Major Robinson of Borden Hants his Bentley carrying the registration number HO 9620. Typical of the era with Bentley owners the car returned to works service on several occasions for repairs and updates as improved components became available. One of the earliest entries in ledger shows the car received an updated stronger A-Type gearbox which is the same box fitted to the car today. In 1924 he returned the car to Works Service for fitment of the newly available four-wheel brakes. By 1926 the guarantee had transferred to Jack Withers a prominent authorized Bentley dealer in London.Withers carried out further service work including decarbonizing bored out block and fitment of BHB high-compression pistons. The next private owner appears to be J.B. Cooper of Cambridge with subsequent owners documented in the Hay Report. Sometime in the 1930s chassis 103 was re-bodied with a similar albeit later style Vanden Plas touring body (number 1261) with unusual LeMans-type cycle wings. The later style body is narrower than the early type thus relocating the handbrake outside the cockpit. No photos of 103s original body exist in the period; however Vanden Plas records document the origins of replacement coachwork and VdP numbers found during the restoration confirm these findings. Having enjoyed a life of regular care and use chassis 103 eventually came to California in the 1960s with H.R. Crown. It remained a well-known car in BDC circles appearing at numerous events throughout the 1970s and 1980s.The most recent owner acquired 103 a few years ago and commenced with a well-researched restoration to return the car to an authentic period-correct state. Records show the original finish to be scratched aluminum with a black varnish and it presents in that style livery today. The chassis and wings are finished in gloss black which combined with the polished bonnet satin-black body and black wire wheels give it a purposeful and sporty aesthetic. The body detailing is marvelous featuring accessories like a period saddle-mount jerry can period fire extinguisher single side-mount spare wheel and a Wilmot-Breeden Calormeter. The nickel-plated Lucas headlamps German silver radiator shell and other flashes of brightwork are in superb order. Also per original specification is the gray Connolly leather trim which is beautifully finished and shows only the slightest signs of use since the restoration.Beneath the polished alloy bonnet rests the original engine number 109. Aside from the improvements made by the factory it features twin S.U. sloper carburetors and ML CG4 magnetos. The engine bay is very well detailed without appearing over-restored displaying a period-appropriate appearance. Power goes through the four-speed A-Type gearbox numbered 156 as fitted by the works in 1923. The chassis features four-wheel brakes as fitted in 1924 along with Stage 2 Perrot shafts and brackets on the front end Excelsior Cord tires and Hartford shocks.As one of the oldest known W.O. Bentleys Chassis 103 provides a fascinating glimpse into the early days of this legendary firm. It is sure to be a welcome addition to any collection and is ready for touring and adventure.Offers welcome and trades consideredFor additional details please view this listing directly on our website https://hymanltd.com/vehicles/6537-1922-bentley-3-litre/

Note from the publisher:
Welcome to our collector car marketplace where we feature thousands of classified ad listings of vintage cars for sale. We hope that you will bookmark our site and visit often; our cars are updated every day. Furthermore we encourage you to subscribe to our mailing list so that we may periodically notify you of interesting classic cars that become available.
Home > Classic Cars For Sale > Bentley > 3 Litre > 1922 Bentley 3 Litre