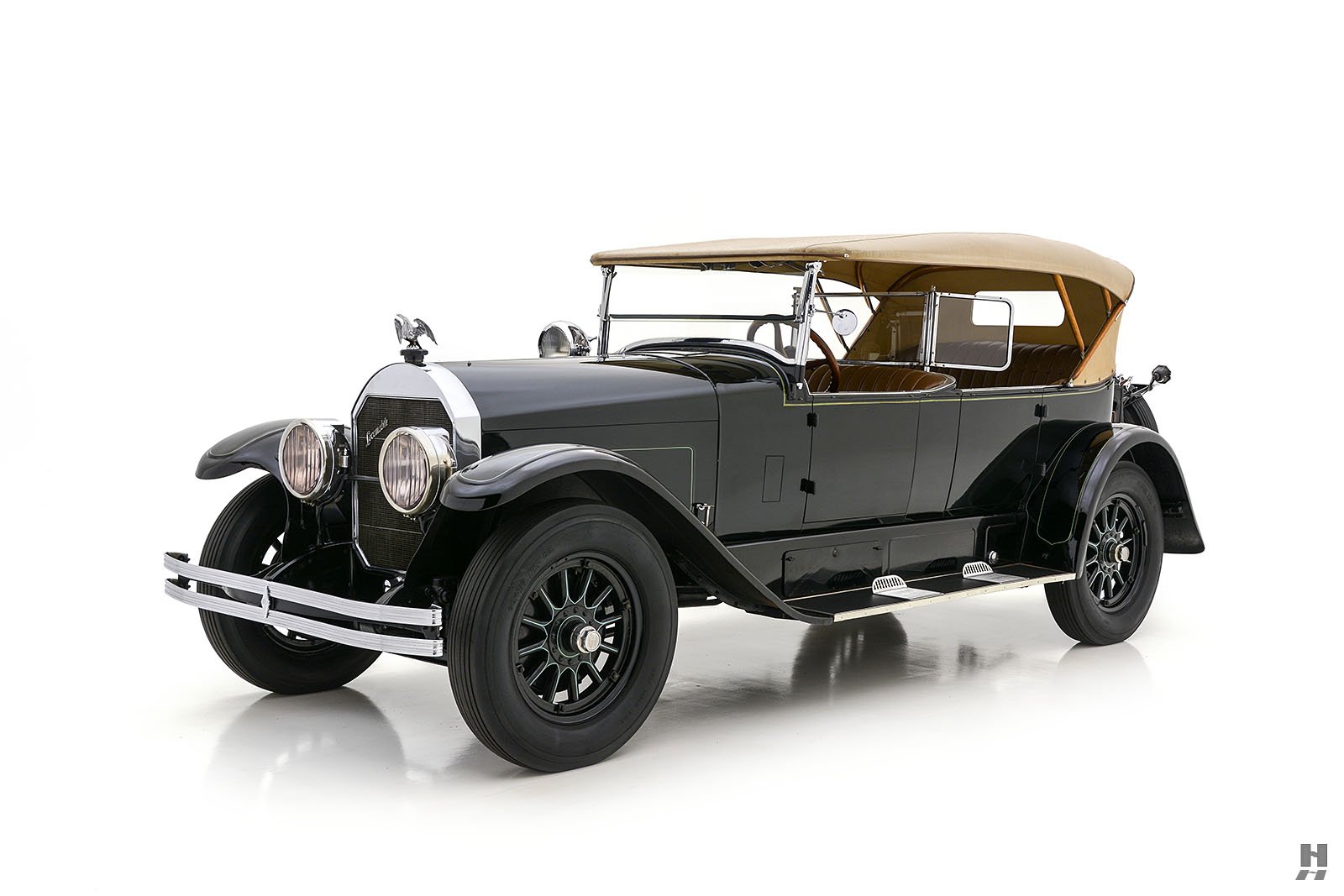 Price: USD $89,500
Once the pride of Bridgeport Connecticut Locomobile rose to prominence as one of Americas most prestigious and exclusive automobile manufacturers. After a false start in the steam car business Locomobile turned exclusively to petrol engines by the end of 1905 and before long their stock in the emerging motoring industry soared. Their cars were extremely well-built and they enjoyed considerable success in motorsport at a time when reliability and durability mattered as much as outright speed. In 1911 Locomobile introduced the T-head inline-six powered Model 48 which remained their top offering for an unprecedented eighteen years the remainder of the companys existence. Locomobiles standing among the likes of Packard Cadillac and Pierce-Arrow attracted the attention of William C. Durant the founder and former CEO of General Motors who had been ousted by the board of his own firm and had a reputation for unpredictability. Durant capitalized on a period of poor management at Locomobile which resulted in receivership in the early twenties. Eager to return to prominence in the car business Durant swept in and purchased the company making it the crown jewel in his new GM-rivaling automobile empire.Unfortunately Durants second attempt at a motoring empire ended in failure taking down some great names in the process Locomobile included. But before that Locomobile introduced a flurry of new models including the all-new Model 90. This new six-cylinder car was only slightly smaller in size than the big Model 48 and it featured a thoroughly modern L-head monobloc engine that was lighter and nearly as powerful as the older T-head design. Unlike lesser models that used outsourced engines the Model 90s inline-six was designed and built entirely in-house at Locomobile so there was no question it met their exacting standards. The Model 90 was beautifully built and offered with a series of fabulously expensive bodies making it a worthy companion to the 48 at the top of the Locomobile line. A series of lesser models introduced during Durants ownership did little more than tarnish the illustrious Locomobile name but the Models 48 and 90 carried the torch proudly until the doors closed for good in 1929.On offer is this marvelous and exceedingly rare Locomobile Model 90 wearing original and distinctly sporting dual-windshield Sportif coachwork. It is one of two examples believed to exist and it is presented in wonderfully preserved condition having had just three owners in ninety-three years. According to the 2nd owner the respected early collector M. L. Bud Cohn this car was special ordered for Russell Clifford Durant. The son of William C. Durant Cliff was an accomplished racing driver musician and yachtsman and he served as Locomobiles President at the time this car was built. The powerful and stylish Sportif was undoubtedly a suitable machine for a wealthy playboy like Cliff Durant. Mr. Cohn reportedly purchased the car directly from the Durant family at some time in the early 1950s not long after Billys death. It remained a centerpiece of Cohns collection for nearly 30 years and he kept it in remarkably original condition excepting some upholstery work and cosmetic freshening along the way. Documents show that in 1976 Cohn sold the Locomobile to Mr. Sam Makhanian also of Los Angeles. Makhanian was a loving custodian of this beautiful and significant Locomobile and he took great care to carry on preserving its exceptional originality.Today the fabulous Locomobile Sportif remains unrestored and well-preserved displaying a charming and inviting patina. The original coachwork is in superb condition featuring evocative details like twin rear-mount spares wood spoke artillery wheels with black wall tires flying eagle mascot and stanchion-mounted search lamp which all further enhance its distinct appeal. Two-tone dark green and black paintwork suits the cars sporting character and is in good order considering its age. Likewise the interior is in fine order trimmed in tan upholstery to compliment the paintwork and tan top. It was likely reupholstered during Mr. Cohns ownership though he was careful to retain the original hardware controls convertible top bows and other fittings.Locomobiles fabulous L-head inline-six presents well under the hood displaying a patina consistent with the cars history and originality. It runs and drives quite well with plenty of thrust from the Locomobile-built 372 cubic-inch six. The next keeper will undoubtedly relish in the powerful and refined 90 horsepower L-head engine and beautifully engineered chassis and it needs little more than new tires and some minor dialing-in before embarking on tours and driving events.The extensive history file contains original correspondence between Bud Cohn and the most recent owner including a bill of sale with a statement from Cohn regarding the cars history within the Durant family. Also included are a number of California registration certificates that verify its long-term ownership along with period service information and a reprinted manual. This Model 90 Sportif is a beautiful example of Locomobiles scarce and exciting flagship beautifully preserved and ideally suited to CCCA CARavan touring or similar events. Its offering represents a unique opportunity to acquire one of the rarest and most charismatic of the mighty Locomobiles.Offers welcome and trades consideredFor additional details please view this listing directly on our website https://hymanltd.com/vehicles/6641-1927-locomobile-model-90-sportif/

Note from the publisher:
Welcome to our collector car marketplace where we feature thousands of classified ad listings of vintage cars for sale. We hope that you will bookmark our site and visit often; our cars are updated every day. Furthermore we encourage you to subscribe to our mailing list so that we may periodically notify you of interesting classic cars that become available.
Home > Classic Cars For Sale > Locomobile > Model 90 > 1927 Locomobile Model 90