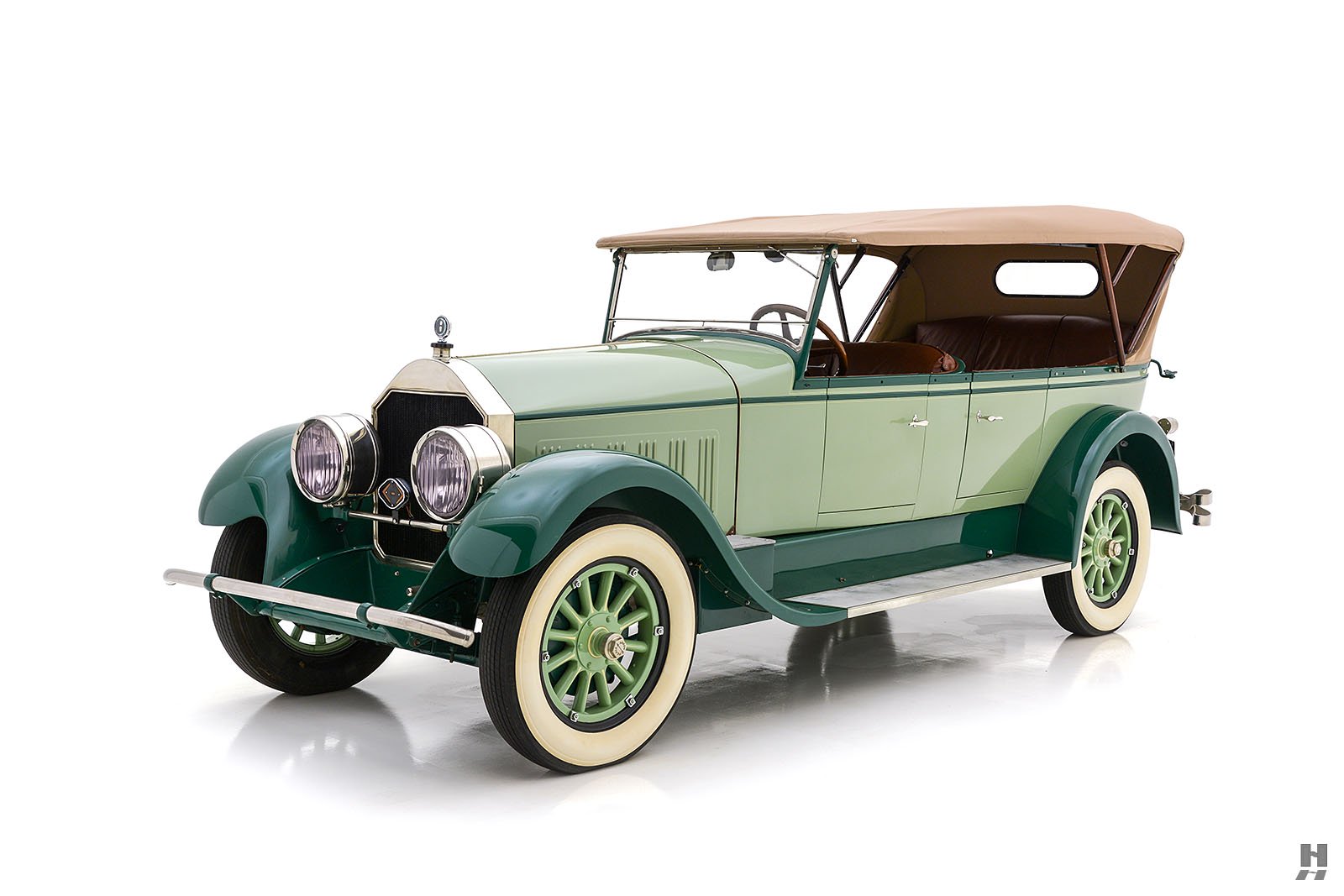 Price: USD $63,500
Pierce-Arrows origins stretch back to the mid-1800s to a company known as Heintz Pierce and Munchauer. Based in Buffalo New York they produced household goods such as birdcages and iceboxes all to a very high quality. In 1872 George N. Pierce bought out his partners and renamed the firm George N. Pierce Company shifting focus to bicycles and by 1900 experimentation with a steam-powered automobile. The steamer failed to catch on so Pierce and his team returned with a small buggy with a French-made De Dion petrol engine. The Pierce Motorette proved far more successful selling 150 examples. In just a few short years Pierce found its momentum and joined the ranks of the most exclusive luxury automobile manufacturers in America. As one of the Three Ps along with Packard and Peerless Pierce-Arrow built some of the finest motorcars of the era renowned for their grand scale and locomotive-like quality.Much of Pierce-Arrows early success is credited to chief engineer David Fergusson who held that role for nearly two decades and led the firm to the pinnacle of luxury car manufacturing in the teens and twenties. By 1909 the company was officially known as Pierce-Arrow and they proved their worth by winning five Glidden Tours in a row. The cars grew in scale and prestige with innovations including cast aluminum coachwork hydraulic tappets and power-assisted braking.Despite Fergussons departure and the arrival of new management Pierce-Arrow remained committed to quality while refining their catalog to appeal to a broader range of buyers. By the late 1920s the range consisted of just two models the Model 80 and the Model 36 the latter positioned as the flagship. Built atop a 138-inch wheelbase chassis the Model 36 featured Pierce-Arrows tried and true T-head inline six-cylinder engine. While Pierce had a more modern 8-cylinder L-head on the drawing board they lacked the funding to bring it to production. While it was out of fashion by 1927 the 414 cubic-inch T-head featured 24 valves and twin ignition to produce an impressive 100 horsepower. Other features included a 3-speed manual gearbox and vacuum boosted mechanical brakes at all four corners. Pierce-Arrows quality control was beyond rigorous - every Model 36 engine was bench tested for 15 hours before being torn down and inspected. After re-assembly two more hours of testing followed in a soundproof room to check for unwelcome noises. Only then would an engine be assigned to a chassis. Each complete Model 36 received five more hours of dyno testing and 40 miles of road testing! Fewer than 2000 Model 36s were built over a brief two-year production run when the L-Head 8-cylinder arrived along with an influx of cash from Studebaker in 1929.This Pierce-Arrow Model 36 is one of approximately 1400 of its type produced in 1927 and it wears the factorys handsome 7-passenger tourer coachwork presented in beautiful two-tone green livery over a brown leather interior. A cherished part of Al Frankels California-based collection since 1964 it is a marvelous example with a well-preserved high-quality restoration. Records show continuous ownership in the Frankel collection for the past fifty-six years and it appears the bulk of the renovation took place in the mid-1990s. Following its restoration Frankel and his family enjoyed the Pierce in numerous shows and concours events along the West Coast and continued to maintain the car in excellent condition.While the Model 36 is a large and impressive machine it is far more user-friendly than the gargantuan Models 48 and 66 that preceded it. This example also has unique features that set it apart including rear-mounted spare wheels and the rarely-seen separate-mounted drum headlamps which were a factory option in place of Pierces typical fender-mounted lamps. The clean uncluttered profile is particularly handsome on this Tourer with wonderfully purposeful and sporty quality. As with all Model 36s the body is aluminum and beautifully crafted with precisely fitted doors and panels. The paint is in excellent condition with deep reflections and good quality surface finishing. Nickel plating is similarly excellent displaying a warm luster on the lamps bumpers and fittings.The attractive brown leather upholstery shows signs of continuous use while remaining supple and in very good order overall. The front seat in particular has a charming character like a well-seasoned catchers mitt. Accessories include a robe rail and a pair of disappearing opera seats in the rear compartment. The simulated woodgrain dash houses an array of original Waltham instruments and original Bakelite switchgear. Lastly the tan canvas top is in good condition and includes a set of matching side curtains.The heart of this Model 36 is the mighty 414 cubic inch T-head which presents in fine order in the engine bay. Some light corrosion is present on select surfaces consistent with this being an older restoration that has been driven. A look underneath reveals properly finished chassis and mechanical components showing signs of regular enjoyment. Records show a full fuel system and cooling system overhaul in 2011 and additional servicing has the car running and driving very well.Rare powerful and exciting to drive the Pierce-Arrow Model 36 is in many ways the last of the pure Pierces before Studebakers ill-fated takeover. The same hands have cherished this marvelous example since 1964 and it is now ready to begin the next chapter of its long and storied life.Offers welcome and trades consideredFor additional details please view this listing directly on our website https://hymanltd.com/vehicles/6689-1927-pierce-arrow-model-36-tourer/

Note from the publisher:
Welcome to our collector car marketplace where we feature thousands of classified ad listings of vintage cars for sale. We hope that you will bookmark our site and visit often; our cars are updated every day. Furthermore we encourage you to subscribe to our mailing list so that we may periodically notify you of interesting classic cars that become available.
Home > Classic Cars For Sale > Pierce-Arrow > Model 36 > 1927 Pierce-Arrow Model 36