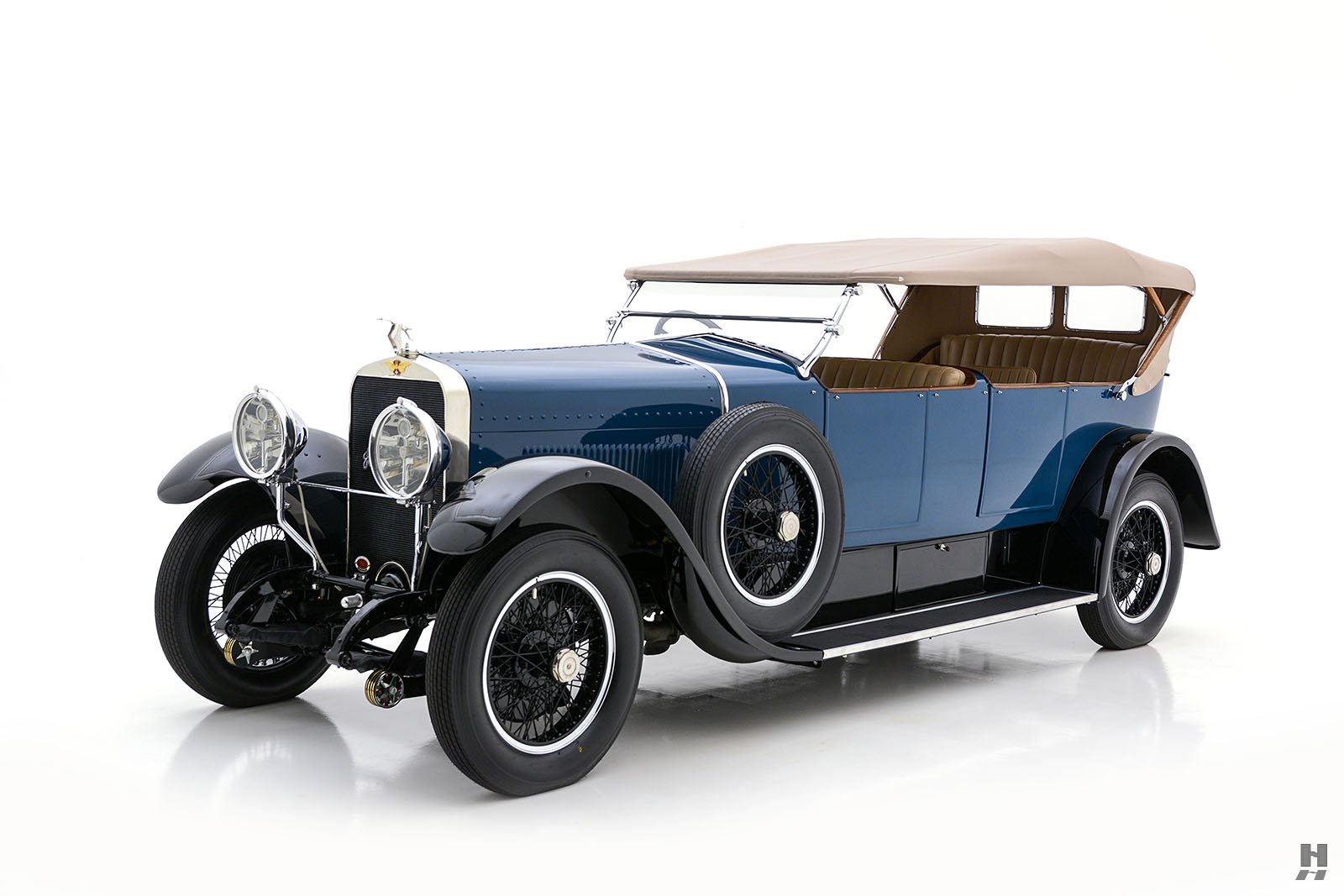 Price: USD $179,500
Hispano-Suiza stands proudly among the greatest classic-era marques in history. On par with Bugatti Delahaye and Isotta-Fraschini Hispano-Suiza produced some of Europes finest motorcars from the teens through the thirties. Based in Barcelona Spain the Suiza part of the name comes from Marc Birkigt a Swiss-born engineer who founded the company and served as technical director from 1904 through the end of car production in the late 1930s. In its nearly 50-year history the company expanded to include a production line in France and even an aero-engine division with an American branch. Early on Hispano-Suiza built a wide range of vehicles from a 10hp four-cylinder to a mighty 60/75 horsepower six-cylinder tourer for King Alphonso XIII. Hispano-Suiza was a car reserved for royalty entertainers and societys elite. Europes most prestigious coachbuilders vied for the chance to put their name on Hispano-Suiza chassis resulting in some of the most stunning and memorable motorcars of the pre-war period.Hispano-Suiza engines are revered for their power and performance. The mighty V8 aero engine which made upward of 300 horsepower played a vital role in the Allied victory in World War I. Hispano shelved plans for a twelve-cylinder successor to the V8 although Birkigit dusted off the design for his first post-war automobile engine fitted to the legendary H6 model. Birkigit utilized essentially one half of the V12 to create a mighty 135 horsepower 6597 c.c. inline-six sharing many internal components with the aero engine.The success of the H6 spawned two smaller models: The four-cylinder T48 and the mid-sized six-cylinder T49. Introduced in 1924 the T49 utilized a new 3.8-liter overhead camshaft inline-six that was closely related to the mighty H6 engine but scaled down for the smaller chassis. Despite its position below the H6 the T49 was still a prestigious high-performance motorcar producing 90 horsepower from its state of the art engine. Between 1924 and 1930 Hispano-Suiza produced the T49 exclusively in their Barcelona works. As with the big 32 CV H6 the T49 appealed to sportsmen and royalty at home in Spain across Europe and even in India where maharajas found favor in its performance and durability. Marque historians estimate T49 production at about 900 cars in total and it is believed that fewer than 30 are known to exist today. Powerful beautifully crafted and technologically advanced the Hispano-Suiza T49 is a jewel in the crown of Spains motoring history.Wearing striking seven-passenger phaeton coachwork this Hispano-Suiza T49 is the subject of a well-researched and meticulous restoration. Per information provided by the most recent owner this Barcelona-built T49 was delivered new to Argentina where it spent most of its early life. Upon receiving its coachwork at the hands of a local Argentine coachbuilder Carroceria V. Marrugat y Cia Buenos Aires the car was sold to the Argentine government and possibly used to transport the newly re-elected president Hipolito Yrigoyen.Following Yrigoyens downfall the Hispano was sold or otherwise disposed of by the new government disappearing from the public eye. In 1955 an American executive with Texaco Oil Company working in Argentina discovered the Hispano-Suiza in a barn and somehow managed to get the car out of the country and shipped to New Jersey. The trail cools off again until the mid-1980s when the car resurfaced in a disassembled state in the collection of Richard Askern of Indianapolis Indiana. He held on to the Hisso for many years in hopes of restoring it but eventually conceded the project and in 1998 he listed the T49 in Hemmings Motor News.The most recent owners acquired the car from Askern and soon embarked on a meticulous restoration. The project consumed several years as parts and information proved scarce. A full teardown and rebuild of the engine were performed and the chassis and body restored to a high standard. Their efforts were rewarded in 2017 with an AACA National First Prize at Bettendorf Iowa followed by a Peoples Choice Award at the 2017 Dayton Concours dElegance and a Distinction Award at the 2018 Cincinnati Concours. In addition the car has been awarded Full Classic status with the CCCA.Still looking fresh from restoration this Hispano-Suiza T49 is stunning in Birkigt Blue with black wings and cream-beige upholstery. The body is quite stylish and sporty with a steeply raked windscreen and clean sweeping lines. The quality of the finish is best described as concours-quality with gorgeous brightwork all around. The seven-passenger cabin is also beautiful featuring exquisitely trimmed beige leather superb restored original instruments and polished alloy and nickel brightwork. The top is done in tan canvas and features a full complement of side curtains. A custom-fitted plastic top cover bound in matching tan fabric accompanies the sale.The star of any Hispano-Suiza sits beneath the hood. In this case it is the 3.8-liter version of Birkigts fabulous overhead-cam inline-six. The crankcase is one impressive casting that incorporates skirts to seal off the engine bay from debris and is a work of art in and of itself. The restoration encompassed a full engine rebuild including a repaired and reground original crankshaft. The block accessories steering box and other components are painstakingly polished to a beautiful finish resulting in a stunning presentation.The restoration of this superb Hispano-Suiza was no doubt a labor of love. These rare and fascinating motorcars are among the finest European classics of all time although few survive outside of Spain. This award-winning example is sure to please the most discerning collector. The exquisite presentation beautiful coachwork and powerful six-cylinder engine make it equally at home on tour or the concours lawn.Offers welcome and trades consideredFor additional details please view this listing directly on our website https://hymanltd.com/vehicles/6530-1928-hispano-suiza-t49-tourer/

Note from the publisher:
Welcome to our collector car marketplace where we feature thousands of classified ad listings of vintage cars for sale. We hope that you will bookmark our site and visit often; our cars are updated every day. Furthermore we encourage you to subscribe to our mailing list so that we may periodically notify you of interesting classic cars that become available.
Home > Classic Cars For Sale > Hispano-Suiza > T49 > 1928 Hispano-Suiza T49