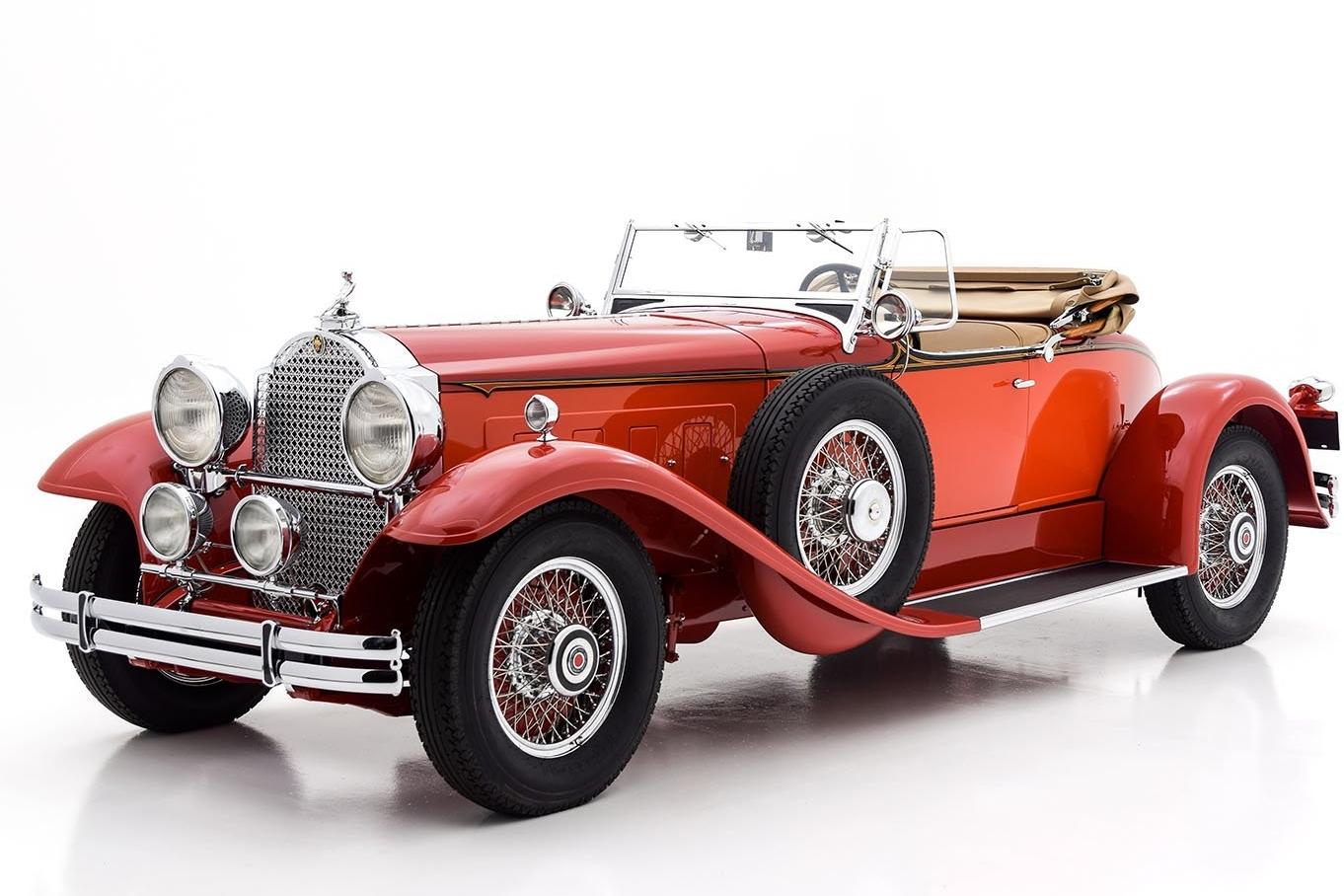 Price: USD $225,000
In 1930 Packard took a big step outside of its comfort zone when it introduced the sporty driver-focused 734 Speedster series. The 734 (7thseries 134 wheelbase) was based on a new shortened and strengthened chassis that was designed exclusively for this sporting new model. Built in Packards new in-house custom shop the 734 was powered by a revised version of the proven 384.8 cubic inch straight-eight engine which had been upgraded with a newly designed separate intake manifold oversize updraught Detroit Lubricator carburetor optional high-compression cylinder head and a 45-degree mounted finned exhaust manifold. A larger vacuum booster was added to ensure a steady flow of fuel at high speed and the engine was mated to a model-specific four-speed gearbox. In the lighter narrower chassis the powerful new engine could push the 734 to 100mph. Heavy duty dampers and large finned brake drums were also fitted to keep things under control on the road. Contrary to popular belief the Speedster name was not related to the body style but to the sporting nature of the special new chassis. Buyers could actually choose from five different custom-catalog body styles all built by Packards custom shop. Choices included the two-seat boat-tail runabout four-seat runabout roadster with rumble seat sport phaeton Victoria coupe or four door sedan. In spite of the exceptional performance and quality Packard only sold approximately 113 examples of the 734. The marketing team and dealers were unsure of what to do with such a high-performance machine given the majority of Packard clients preferred luxury and silent operation over outright speed. Today the 734 is one of the most desirable Packards ever produced and is considered by many to be one of the greatest cars of the American Classic Era.Considering the scarcity and desirable nature of factory-built 734 speedsters (just twenty-seven of the original 113 survive) it is of little surprise that values easily surpass seven figures on the rare occasion they become available on the open market. Of the five body styles originally offered on the 734 chassis it is the Two Seat Runabout that is the most sought after. Only 11 are known to exist today and rarely appear on the market so naturally some resourceful enthusiasts have taken to creating their own versions of these performance icons. Our featured 734 Speedster Runabout is just such a car; a finely crafted and accurately built representation or the original that is impeccably detailed and beautifully presented. The build includes a number of correct original components as employed on the genuine factory-built Speedsters.Serial number 186334 denotes this chassis as a 7th series Deluxe or Custom Eight delivered in June of 1930. The 134 wheelbase chassis is clothed in a boattail runabout body that is both highly accurate and beautifully constructed. Recently out of a large private collection this Packard boattail spent some time in Switzerland in the 1990s where it was issued FIVA documents and used extensively for rallies and Packard Club tours throughout Europe. It returned to the US later in the decade where it took part in the Great American Race. It is now impeccably presented in a very attractive and vibrant red paint scheme with black accents. The car has been very well accessorized with 19 chrome wire wheels wrapped in new blackwall Firestone rubber dual steerable Pilot-Ray driving lamps radiator stone guard mascot and dual sidemount spares. Chrome plating on the fittings and accessories has been restored to a very high standard. The quality of the body construction is first rate displaying excellent fit and finish throughout.The two-place cockpit is correctly laid out with the signature staggered seating that allowed the driver a bit more elbow room when motoring at speed in the narrower-than-standard cabin. The seats and door panels are trimmed in high quality tan leather and show little use since the car was freshened in the hands of the previous owner. The dash controls and interior fittings are all properly presented with the same consistent quality as the rest of the car. A correct style roadster top is trimmed in tan canvas and a pair of matching side curtains are included for all-weather usability.Packards legendary 348.8 Cubic Inch inline eight is dressed in Speedster specification with a correct finned exhaust manifold vacuum tank and two-barrel Detroit Lubricator carburetor. The powerful engine paired with a period-correct 4-speed gearbox and 3.31:1 rear axle allows for effortless high-speed cruising. It is beautifully presented with outstanding detailing and finish work on the signature Packard Green painted surfaces along with high quality chrome hardware and fittings. The undercarriage and suspension are spotlessly presented with excellent red paintwork on the chassis axles and springs.This splendid Packard boattail speedster is a thoroughly enjoyable and impeccably finished automobile that has been artfully crafted to be hardly distinguishable from an original Speedster Runabout. Encompassing all of the style and performance of the factory built originals it is the ideal choice for rallies and tours. Proven on numerous events in Europe and America this striking Packard is sure to provide endless enjoyment for its next owner.Offers welcome and trades consideredFor additional details please view this listing directly on our website https://hymanltd.com/vehicles/6662-1930-packard-734-speedster/

This 1930 Packard 734 was listed for sale on 3-20-20 08:31:32. The vehicle color is red and VIN is not available . Kindly check ad for seller's location. Seller`s stock ID is hyman6662. There are 20 other Packard cars currently listed for sale on our website. You may desire to see what other Packard cars are selling for by visiting our Sales Data page.

Note from the publisher:
Welcome to our collector car marketplace where we feature thousands of classified ad listings of vintage cars for sale. We hope that you will bookmark our site and visit often; our cars are updated every day. Furthermore we encourage you to subscribe to our mailing list so that we may periodically notify you of interesting classic cars that become available.
Home > Classic Cars For Sale > Packard > 734 > 1930 Packard 734