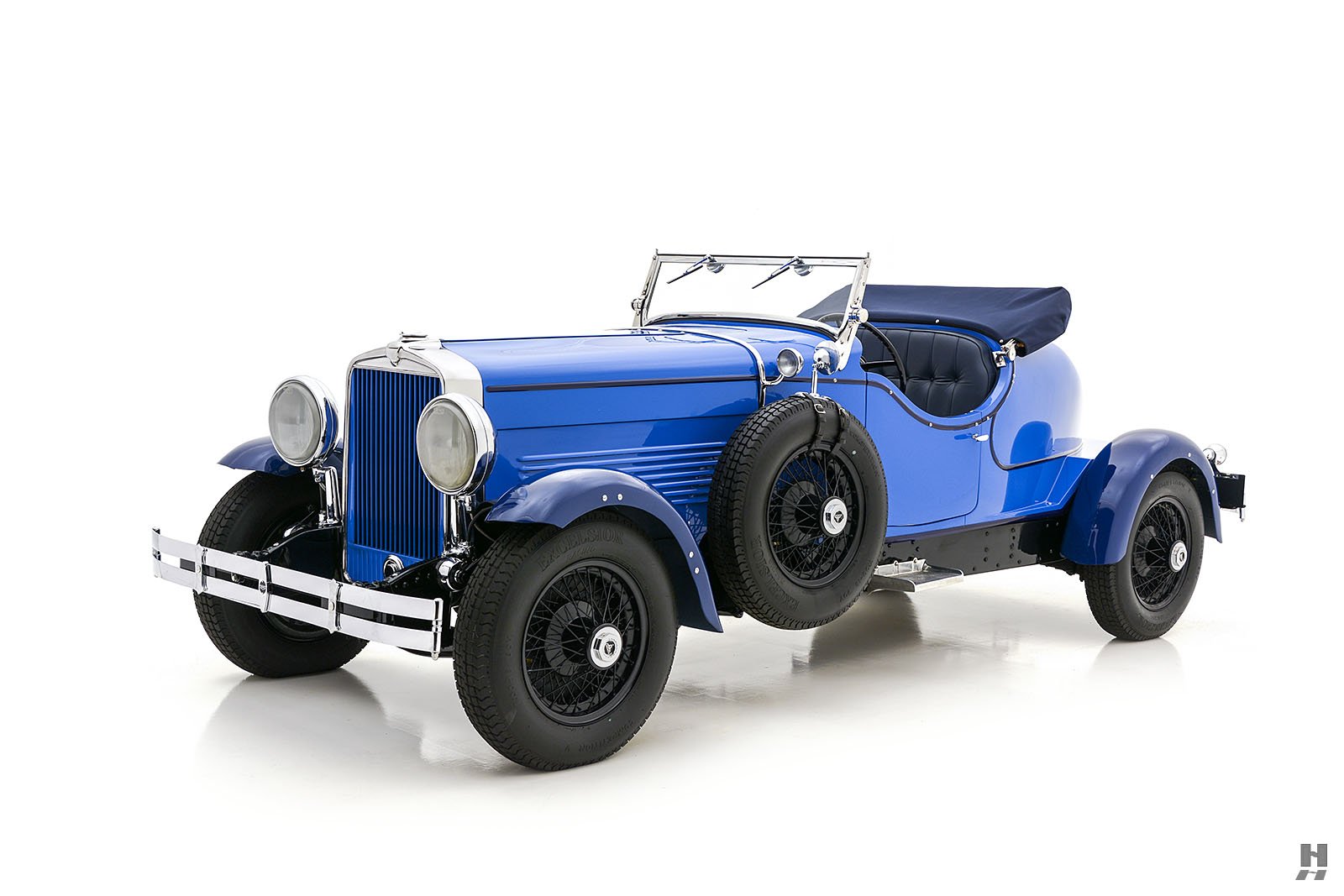 Price: USD $129,500
In the mid-1920s the brilliant engineer Fredrick Moscovics took over control of Stutz Motor Car Company following the contentious departure of the companys founder and namesake Harry C. Stutz. History generally dictates that the exodus of a leader like Stutz would soon spell the end for an automobile company but with Moscovics at the helm that was certainly not the case. His talent and creative energy rejuvenated the Stutz Motor Car Company leading them into one of the most successful periods in company history.The Moscovics-designed Safety Stutz chassis arrived in the late 20s and in 1927 was paired with his new 287 cubic-inch Vertical Eight engine dubbed Challenger. The highly advanced Vertical Eight earned its name from its above-average height necessitated by a long-stroke cylinder block design topped with a sophisticated new overhead cam head. The engines lack of rockers and pushrods translated into silent smooth operation with class-leading horsepower and torque. The Safety Stutz chassis was a rigid double-drop design that kept the center of gravity low and imparted the cars with exceptional handling. The series AA was a critical success and a sporting one taking the AAA-sanctioned Stock Car crown in 1927 winning every race it entered. The AA evolved into the BB with several improvements to the engine and chassis specification. Now displacing 299 cubic inches the Series BB engine produced 110 horsepower or more depending on the compression ratio.In 1928 a French team entered a Stutz BB Blackhawk at the 24 Hours of LeMans. The underdogs from Indianapolis put up a formidable fight against the mighty Works Bentley squad. In the closing hours of the grueling race the leading Bentley 4 of Woolf Barnato was getting reeled-in by the rapid Stutz. When the dust settled Stutz achieved a surprise 2nd place overall finish earning the marque accolades worldwide for its impressive reliability and performance.Inspired by Stutzs storied competition history this 1930 Model M Boattail Speedster is a fabulous one-off creation modeled after the Stutz Jones Special Indy car of 1930. Created from the ground up using a 1930 Model M engine and chassis this rare and desirable Stutz was discovered in the early 2000s as a disassembled project missing its original coachwork. The owner an experienced collector and avid Stutz enthusiast commissioned the restoration and transformation into this well-sorted beautifully finished and thoughtfully reimagined motorcar built for long-distance rallies. The original intention was to run the car in The Great Race though he ultimately never entered the event.With the projects blueprint established they began by stripping and rebuilding the chassis and running gear. The overhead-cam Vertical Eight engine was completely rebuilt from top to bottom. Records show the cylinder block was align-bored and decked and internal updates include Packard rods new bearings and a modified high-capacity oil pump. At the top end the cylinder head was completely rebuilt with new guides and the cam was ground to custom specs by Delta Camshaft. They also added a custom-fabricated top-end oiling system to improve lubrication at high revs. Backing the engine is a ground and lightened flywheel modified to accommodate a modern diaphragm-style clutch. In place of the standard three-speed transmission is a four-speed synchromesh gearbox sourced from a mid-80s Ford pickup which directs power to a custom Ford 9-inch rear axle built with all new bearings and gears. The standard Model M suspension was restored and left virtually stock preserving the cars original character and excellent handling.With the chassis dialed-in the focus shifted to the coachwork. Inspiration for the distinctive boattail speedster body came directly from the Jones Stutz Special. Patrick Kelso of Pennsylvania created the body from aluminum and steel and the superbly detailed form mimics the Jones Specials signature cut-down cockpit and rounded streamlined tail treatment. To better suit the rigors of long-distance open-road rallying it features cycle fenders all around along with a folding top and windscreen. The restored wire wheels are wrapped in high-performance Excelsior black wall tires providing the finishing touch for the purposeful and aggressive stance.The quality of the craftsmanship is no more apparent than in the superb paintwork and interior. The radiant two-tone blue livery is finished to a very high standard and ideally suits the sporting character. The blue leather cockpit is also excellent displaying minimal signs of use since its completion just a few years ago. Details like the canvas fender skirts integrated trunk and fully operational roadster top highlight the bodys thoughtful and well-planned construction. While the Stutz was built for competitive historic rallying no corners were cut in making it a visually striking motorcar. As a testament to its quality it won a Palmetto Award at the 2016 Hilton Head Concours dElegance shortly after its restoration.This enormously charming and wholly unique Stutz Model M is perfect for entry into a wide variety of competitive and casual driving events including The Great Race and more. With its myriad mechanical improvements there is little doubt it will provide its next caretaker with countless miles of motoring excitement.Offers welcome and trades consideredFor additional details please view this listing directly on our website https://hymanltd.com/vehicles/6746-1930-stutz-model-m-boattail-speedster/

Note from the publisher:
Welcome to our collector car marketplace where we feature thousands of classified ad listings of vintage cars for sale. We hope that you will bookmark our site and visit often; our cars are updated every day. Furthermore we encourage you to subscribe to our mailing list so that we may periodically notify you of interesting classic cars that become available.
Home > Classic Cars For Sale > Stutz > Model M > 1930 Stutz Model M