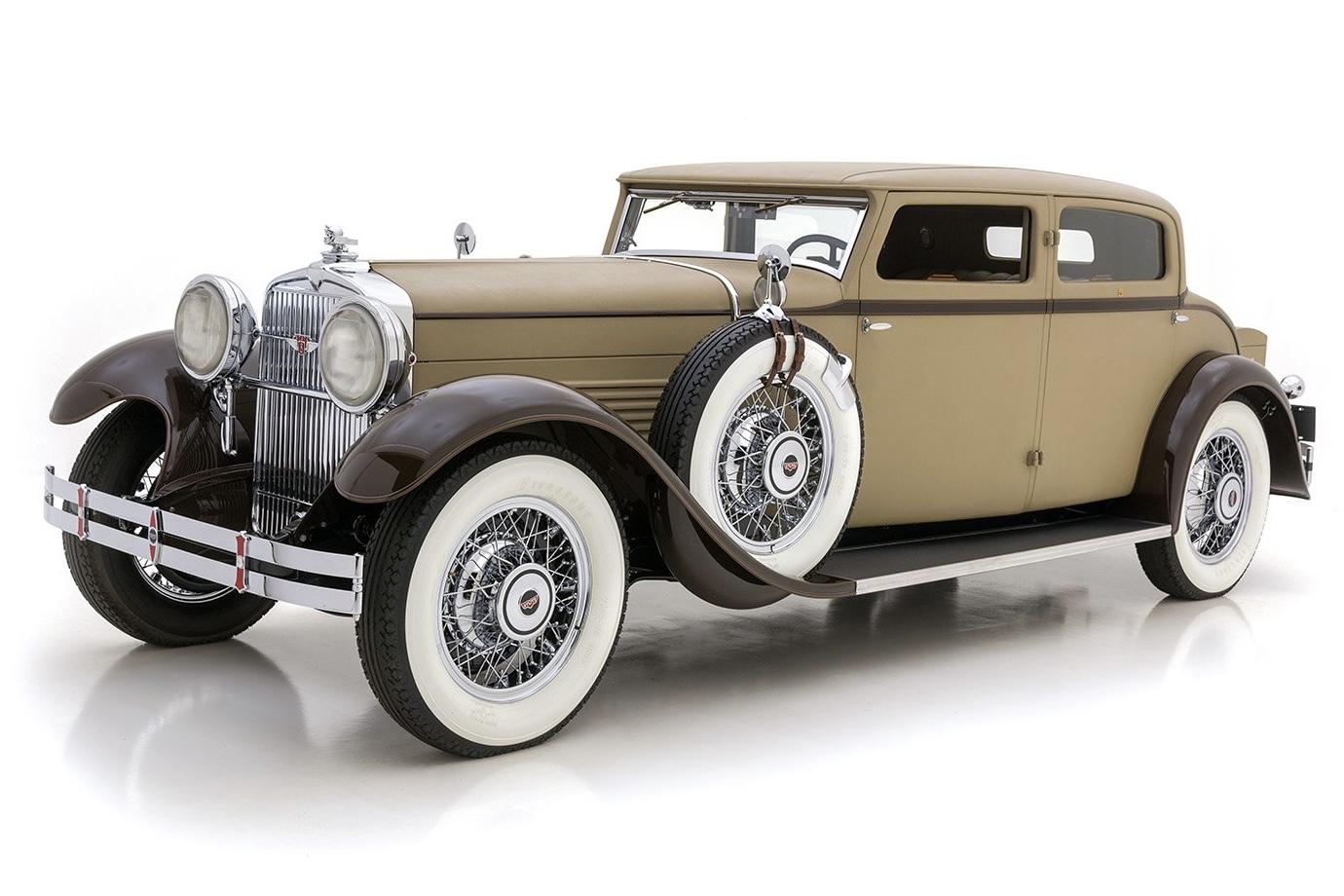 Price: USD $575,000
In the mid-1920s the brilliant engineer Fredrick Moscovics took control of Stutz Motor Car Company following the contentious departure of the companys founder and namesake Harry C. Stutz. Moscovics talent and creative energy rejuvenated the Stutz Motor Car Company leading them into one of the most successful periods in company history. The Hungarian-born Moscovics trained in Europe and previously worked at Marmon before arriving at the helm of Stutz. He found inspiration in the powerful continental tourers from Bugatti and Hispano-Suiza and was as gifted a promoter and manager of the Stutz brand as he was an engineer. Perhaps his most significant contribution to Stutz was the inline 8-cylinder engine with advanced chain-driven overhead cam layout cross-flow head dual ignition ten main bearings and a twin-throat carburetor highly sophisticated by American standards of the day. As fitted to the superb 1930 Model M the engine displaced 322 cubic inches with a healthy 115 horsepower output. Later in the 30s the Model M was renamed the SV-16 (single valve) to differentiate it from the (dual valve) DV-32 with its 32-valve cylinder head.Thanks in large part to that magnificent engine Stutz was one of the few American motor companies to break into the fickle European market and they found considerable success in motorsport particularly at Le Mans. Stutz drew on their racing experience to appeal to European customers and introduced a series of models with lightweight coachwork by Charles Weymann who set up a shop in Indianapolis specifically to produce these bodies. The so-called Chateau Series included several beautiful body styles all evocatively named for glamorous French locales likeChaumont ChantillyDeauville Versailles andMonte Carloand each with a uniquely stylish European-inspired design.Foremost among the Chateau series was the Monte Carlo a captivating and sporty four-door saloon with an aggressively low roofline letterbox side windows and an integrated trunk. The magnificently stylish body featured Weymanns patented aircraft-inspired construction comprised of a painstakingly crafted wood frame wrapped in a padded synthetic leather material that was both extremely lightweight and durable. Greased paper insulated some wooden joints while others were precisely spaced to prevent rubbing with the woods natural expansion. Weymanns ultimate goal was to produce a body that was virtually free of squeaks and in Stutz marketing jargon guiltless of rattle. Of course this process was massively labor-intensive and at $4495 in 1930 the sublime Monte Carlo was one of the most expensive models in the range.Built on the grand 145-inch wheelbase Model MB chassis this 1930 Model MB is one of just three examples of the type extant with WeymannsMonte Carlocoachwork. It is magnificently restored and boasts superb provenance with several highly respected collectors. Like many Stutzes of the period this car owes its existence to the late Alexander K. Miller. From his farm in Vermont the inherently wealthy famously reclusive and notoriously eccentric Miller kept a hoard of dozens of Stutz automobiles many of which held tremendous value and significance to the Indianapolis marques history. A.K. Miller began buying the cars shortly after the factory closed amassing one of the worlds largest Stutz collections by the time he died in 1993. He was no ordinary collector as Miller often kept cars in ramshackle huts and barns scattered around his property. Only a handful of people ever got to see them though A.K. was allegedly more receptive to foreign visitors as they were less likely to be from the IRS!Interestingly this MB Monte Carlo is one of the only cars to escape the estate during Millers lifetime when Sherwood Kahlenberg pried the partially-restored Stutz MB from Millers hands in 1974. In 2000 it was acquired by renowned Stutz collector and CCCA stalwart Andy Simo who commissioned RM Restorations in Ontario to perform an exhaustive nut-and-bolt restoration to concours standards. The great Ken Nemenic of California handled the interior trim and body upholstery and the results of his work are nothing short of spectacular a genuine masterpiece of the upholsterers craft. The body upholstery is particularly extraordinary displaying an attention to detail that is beyond reproach.Following the restoration this breathtaking Stutz earned numerous awards including a Best in Class at the 2002 Pebble Beach Concours dElegance the Warshawsky Award for the highest-point car judged at the CCCA annual meeting Best of Show Domestic at the 2004 Glenmoor Gathering and Most Elegant Closed Car at the 2005 Amelia Island Concours. After its time with Andy Simo it joined another one of Americas most prestigious collections - that of Joseph and Margie Cassini III. After acquiring the Stutz the Cassinis returned it to RM Restorations for a thorough freshening. In 2015 it yet again won its class at Pebble Beach and Amelia Island a feat to which few cars can lay claim.Today the Stutz MB Monte Carlo remains in superb condition. The fit of the body is astonishing with doors that shut precisely with the lightest of touch thanks to the unrivaled skill displayed by Mr. Nemenic and the team at RM Restorations. It was restored to be as close to original specification as possible with period-correct materials finishes and hardware. The paint and brightwork are exquisite and the car has an enormous presence thanks to its 145-inch wheelbase sparkling chrome wire wheels and whitewall Firestone tires.Few Stutzes have been as successful in top-level concours events as this marvelous MB Monte Carlo and it will undoubtedly hold a place of honor is in any collection of world-class motorcars.Offers welcome and trades consideredFor additional details please view this listing directly on our website https://hymanltd.com/vehicles/6942-1930-stutz-model-m-monte-carlo/

Note from the publisher:
Welcome to our collector car marketplace where we feature thousands of classified ad listings of vintage cars for sale. We hope that you will bookmark our site and visit often; our cars are updated every day. Furthermore we encourage you to subscribe to our mailing list so that we may periodically notify you of interesting classic cars that become available.
Home > Classic Cars For Sale > Stutz > Model M Monte Carlo > 1930 Stutz Model M Monte Carlo