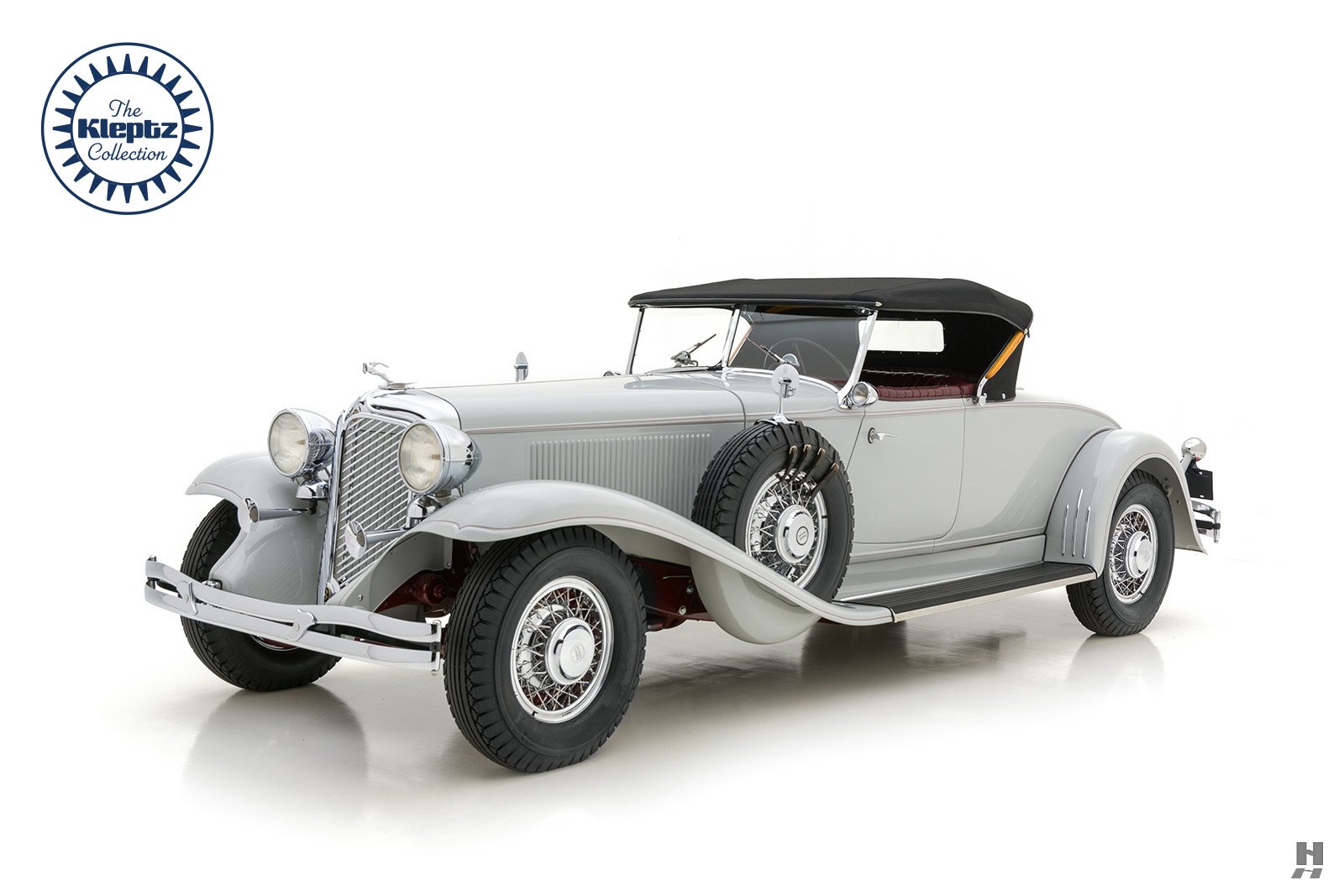 Price: USD $475,000
In 1931 Chryslers Imperial name graduated from a high-end trim package to an all-new motorcar entirely separate from the rest of the line. The flagship CG Imperial featured Chryslers first eight-cylinder engine fitted to a massive 145-inch wheelbase chassis with advanced features like a four-speed gearbox and hydraulic dampers. To clothe the impressive chassis Walter P. Chrysler and vice president K.T. Keller used the radical Cord L-29 as a benchmark for style going so far as to hire that cars designer Alan Leamy away from Cord to tweak the Imperials styling. The L-29s lowness was so critical to Mr. Chrysler that engineers went so far as to suggest using a front-drive or even a rear-engine design! While these suggestions never left the sketch pad such ideating pointed to the engineers dedication to the design brief.When the CG emerged it did so in spectacular fashion - with gracefully swept fenders a low-mounted deep V radiator grille and raked windscreen giving the impression of effortless speed even when parked. Ensuring the CGs performance lived up to its looks the L-head straight-eight developed 135 horsepower from 384.8 cubic inches. The chassis featured advanced suspension geometry hydraulic dampers and four-wheel hydraulic brakes to match the cars 100 mph capability. Production totaled 3228 cars including 99 bare chassis shipped to outside coachbuilders or for export. Todays collectors view the CG Imperial as one of the most beautiful Classic Era cars and certainly one of the prettiest Chryslers ever produced. Favored by enthusiasts who prefer to drive their vehicles as intended the CG Imperial rewards drivers with superlative performance and impressive road manners.Chrysler outsourced production of the standard Imperial bodies to Briggs though buyers seeking something more exclusive could select one of four semi-custom designs created under the LeBaron banner. Of the multitude of body styles available on the CG chassis few match the beauty and drama of the LeBaron Roadster. Their interpretation of the 2/4-passenger rumble-seat roadster is among the finest expressions of this sporting Classic Era body style. Paired with the CGs gorgeous front-end styling the LeBaron Roadster has stunningly elegant lines with minimal adornment to spoil its graceful profile. Experts suggest that about a dozen CG Roadsters survive and this stunning example has been the pride of the Kleptz collection since the 1970s with a superb restoration that has withstood the test of time.According to widely-respected Imperial historian and expert this car wears LeBaron roadster body number 98 mated to a correct specification CG chassis and engine from a sedan. The history file contains an intriguing letter written by William S. Castle of Speedway Indiana who outlines the cars possible history from the 1940s when it was owned by a GM employee named Ed Berlin. Ed was based in the Cleveland area and used the Imperial as a daily driver as there was a shortage of GM cars available after the war. An enclosed photo dated 1949 shows the car in its proper spec complete with a few bumps and scars from the rigors of daily use.When Frank acquired the CG Roadster in the 1970s it was a sound complete car due for a much-deserved restoration. Accompanying photos show it was stripped down to a bare chassis and painstakingly restored by Frank to his usual high standard. He selected a striking and timeless light gray livery over an oxblood red chassis accented by red coach lines and red upholstery playing beautifully against the body color. Period accessories include dual side-mount spares chrome wire wheels with black wall tires Gazelle mascot stone guard cowl lamps and more. The restorations quality is reflected in a coveted CCCA Senior Premier Award proudly affixed to the cowl.Following a period of storage the CG remains in remarkably well-preserved condition. Close inspection reveals only a few very minor blemishes that do little to detract from the otherwise excellent presentation. The mottled oxblood leather remains supple in both the drivers compartment and rumble seat and a full set of side curtains supplements the black canvas top. Chryslers big 135-horsepower L-head eight is authentically detailed with proper paint finishes and hardware and shows a light patina from occasional use and storage. The stout L-head engine has been carefully reawakened and now runs well with excellent oil pressure. The four-speed gearbox shifts well and the car feels snappy and refined on the road just as a CG Imperial should. With minimal preparation this gorgeous and highly desirable CG should prove to be a most entertaining and exciting entry for CCCA CARavan tours or other events and will undoubtedly bring its next caretaker much joy just as it has in its nearly five decades with Frank Kleptz.Offers welcome and trades consideredFor additional details please view this listing directly on our website https://hymanltd.com/vehicles/6847-1931-chrysler-cg-imperial-roadster/

Note from the publisher:
Welcome to our collector car marketplace where we feature thousands of classified ad listings of vintage cars for sale. We hope that you will bookmark our site and visit often; our cars are updated every day. Furthermore we encourage you to subscribe to our mailing list so that we may periodically notify you of interesting classic cars that become available.
Home > Classic Cars For Sale > Chrysler > CG Imperial > 1931 Chrysler CG Imperial