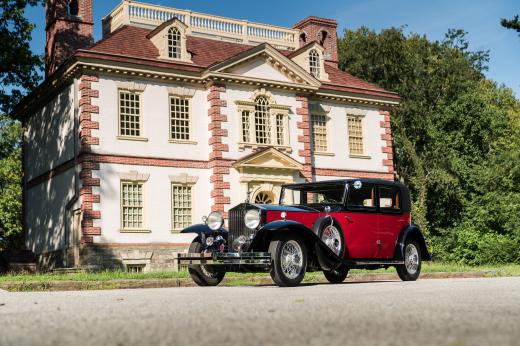 When it comes to Pre-war elegance, there are few marques that tick the boxes as well as Rolls-Royce. With their iconic Spirit of Ecstasy hood ornament, powerful but smooth engines, fantastic chassis, and elegant good looks, the prewar Rolls-Royce 40/50 hp models embody the era exquisitely. Today, these 40/50 hp models, especially the Phantom II models, remain extremely useable and provide an excellent way to experience the world of elegant pre-war motoring.

The Rolls-Royce Phantom II was introduced in 1929 to build upon the successful Phantom I, also referred to as the New Phantom, which was released in 1925. The Phantom II would be the last of the now-infamous 40/50 hp models. The Phantom II utilized the same engine as the Phantom 1, a 7.7 liter pushrod overhead valve straight-six, but added a crossflow cylinder head, improving both power and smoothness of delivery. The engine was now bolted directly to the 4-speed manual transmission and power was transmitted through an open driveshaft, a hypoid bevel final drive and Hotchkiss type drive, which replaced the torque tube and remotely mounted gearbox which was used on the earlier 40/50 hp Rolls-Royce models. The chassis was all new, now featuring both front and rear axles mounted on semi-elliptical leaf springs. This revised chassis allowed the overall height of the cars to be reduced by almost 9 inches, providing for both sleeker looks as well as a better handling car. The 4-wheel servo-assisted brakes from the Phantom 1 were carried over to the Phantom II and a Bijur centralized lubrication system was included for ease of maintenance. The standard wheelbase on the Phantom II was 150 inches with a 144 inch, short wheelbase option dubbed the Continental, also being offered. All Phantom II chassis, including ones destined for the United States were produced in the Derby factory since the Springfield, Massachusetts factory was closed with the end of Phantom 1 production in 1931. Just like the Phantom 1, all of the Rolls-Royce Phantom II models were built as bare chassis and then delivered to coach-builders for finishing. Body styles varied greatly across the approximately 1,693 examples produced, with elegant coachwork being put in place by the likes of Park Ward, Brewster, Thrupp & Maberly, Mulliner, Carlton, Henley, and Hooper.

This particular Phantom II, chassis #230AJS and engine #N85U, is an RROC award-winning car which still wears its original St. Martin body by Brewster and retains it original engine and chassis. 230AJS was produced in 1931 and shipped to the U.S. on 5/9/31. It was then bodied and delivered to (what we believe) was its first owner, a Mr. Charles E.F. McCann of New York, New York. Mr. McCann was a New York lawyer who married Helena Woolworth, the eldest daughter of Frank Woolworth, founder of the now famous retail company. Mr. McCann was also a New York socialite, with a long list of high society club memberships and affiliations. According to the factory build sheet, chassis 230AJS was destined to have a Huntington body which are often larger, limousine types. However, like many Roll-Royce of this era, by the time the chassis made its way to the United States, its original buyer opted for a more elegant Brewster St. Martin body instead; according to Brewster build records. There were only 3 Phantom II chassis fitted with the St. Martin body style and it is believed that 230AJS is the only remaining example of the 3 produced. Much of the early life of this car is unknown, with the records of its ownership lost to time, however, the current owner and consignor purchased the car in 1997 from Harry Woodnorth Automobiles in Chicago, Illinois. Shortly after purchasing the car, it was sent to Dennison-Jayne Motors of West Chester, Pennsylvania for an open checkbook restoration in conjunction with D&D Classic of Ohio. Receipts from the restoration are detailed and numerous, with the final total coming out to a staggering $385,000 (receipts are viewable upon request and restoration summary can be examined in the View Documents tab). During the restoration, the car was fitted with tasteful upgrades to improve the drivability of the car, including power steering, power brakes, and an analog gas gauge. All of these upgrades were made in a fashion that they are easily removable should there be a desire to return the car to its factory form. The restoration was completed in 2004 and today the car remains in fantastic shape. There are some minor signs of aging commensurate with car that has been toured and shown, but the paint, interior and brightwork remain in excellent shape throughout. The car is mechanically very sound and is immediately ready to be thoroughly enjoyed. Included with the sale of this car are an immense amount of extremely detailed restoration records as well as the build record for the car.

Note from the publisher:
Welcome to our collector car marketplace where we feature thousands of classified ad listings of vintage cars for sale. We hope that you will bookmark our site and visit often; our cars are updated every day. Furthermore we encourage you to subscribe to our mailing list so that we may periodically notify you of interesting classic cars that become available.
Home > Classic Cars For Sale > Rolls-Royce > Phantom II > 1931 Rolls-Royce Phantom II