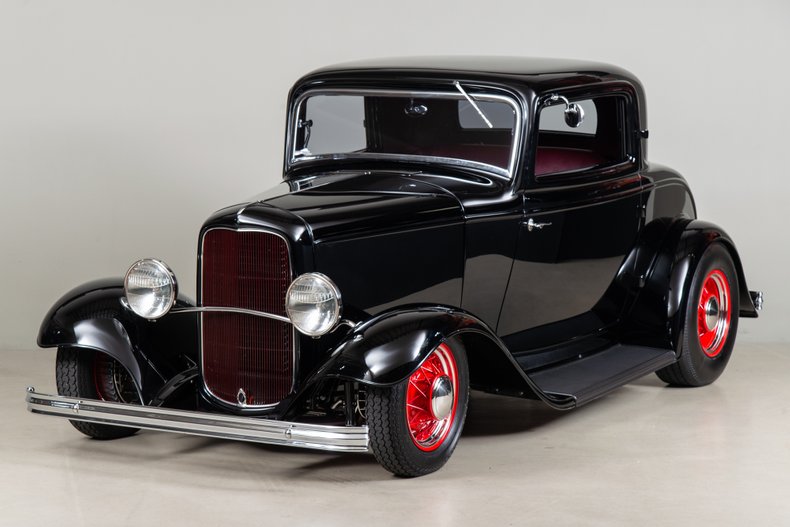 1932 Ford 3-Window Hot Rod VIN: 18156389 Original 1932 Ford 3-window hot rod Featured in The Rodders Journal #39 5 drop to the front axle for an aggressive raked stance Custom-valved Bilstein shocks designed and installed by Canepa Extremely comfortable long-distance driver Equipped with modern comforts The original Henry Ford 32 has become a platform for so many award-winning hot rods that the mere search for one can yield hundreds of permutations, all with their own distinct and unique character. With countless ways of modifying and with more parts than anyone might know what to do with, the amount of customization able to take place is staggering. This 1932 Ford 3-window coupe began its hot rod journey relatively recently in 2006, undergoing a thorough restoration and modification that created a unique Ohio-style hot rod that is also an incredibly comfortable performer for long travels. Larry Henderson of Waynesville, Ohio was the originator and builder of this stunning black 32 Ford coupe, intent on styling his hot rod with the Ohio look. The Rodders Journal call this an excellent example of the Ohio look, a traditional hot rod styling with the emphasis on getting a heavily raked ground-hugging stance. Beginning with an original steel body from a 1932 Ford, Henderson and a number of his hot rod friends made one of the first primary steps ensuring that it would be low enough. A Magnum tube front axle was used which allowed a 5-inch drop of the front while at the same time being narrowed to 44 5/8th inches. Narrowing the axle this much allowed Henderson to really pull the tires in and hide them. To lower the car even further, the coupes headlight bar was completely taken apart and not only was drilled to run wires for the 1934 Commercial lights internally, but widened by one inch to push the front fenders a little further down over the tires. The front wheels are custom built, using 40 spoke Kelsey-Hayes wire centers and 15x4 Volkswagen outer hoops. The rear wheels are custom built as well, using Chevy 51x8 outer hoops to complete the heavily raked look of this hot rod. With the aggressive rake taken care of, the rest of the 32 Ford could be addressed. The tried-and-true formula of a Chevrolet 350 V8 with a GM Turbo 350 automatic transmission were used, with plenty of low-end grunt and comfortable to live with on long drives. A 625cfm 4bbl carburetor along with a 55 Pontiac air cleaner dresses up the engine bay. The brakes are 65 Buick finned aluminum drums, and a late 60s Chevy half-ton pickup master cylinder was used. The interior is another example of the Ohio style. With the surfaces covered in Claret vinyl and leather, the seat uses wide pleated inserts along with big rolls on the seat back and bottom have been a part of the understated look since the 70s. The dash is original, modified for the gauges to get the perfect fit. Autometer Phantom series gauges present the necessary info to the driver, while a Bell-style leather wrapped steering wheel sits comfortably in their hands. An excellent feature of the interior for shorter drivers is the 70s Chevy tilt steering column, allowing the perfect driving position for anyone in the drivers seat. Larry intended to drive the hot rod quite a bit and focused efforts on everyday usability and comfort. Too often hot rods are excellent for short sprints to and from a location but spending more time inside them can cause unwanted discomfort. Not wanting anything like that, Larry set to work. For those hot Ohio summers Vintage Air GEN-1 air conditioning was added, keeping the occupants cool no matter what the temperature. The large 65 Buick finned aluminum drum brakes are effective, the suspension compliant, the exhaust note is subtle (but not quiet!) and a reliable drivetrain allows the driver to enjoy stress-free miles. Henderson finished his restoration in 2006 and drove the car for a little less than 2 years, putting on just under

Note from the publisher:
Welcome to our collector car marketplace where we feature thousands of classified ad listings of vintage cars for sale. We hope that you will bookmark our site and visit often; our cars are updated every day. Furthermore we encourage you to subscribe to our mailing list so that we may periodically notify you of interesting classic cars that become available.
Home > Classic Cars For Sale > Ford > 3-Window > 1932 Ford 3-Window