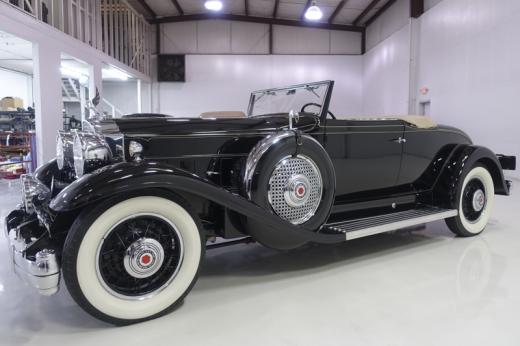 Price: USD $229,900
The Rykken Family of Montana with their 1932 Packard on a family trip circa the 1930s. The family owned this 1932 Packard from 1933 until 2007. The 1932 Packard Deluxe Eight Roadster Coupe featured here is finished in stunning black over black interior and beige folding convertible top. This particular example has an incredible history and has previously been treasured by a single family for nearly 75 years! It was delivered new in Greenwich, Connecticut, on November 1931 and was sold to its second owner, a Mr. C.T. Rykken of Musselshell, Montana in 1933. Mr. Rykken operated a Conoco service station in Musselshell for many years and during that time this Packard was responsible for carrying the Rykken family on numerous outings. Family photos with the car date back to the 1930s are included and show the Rykkens on vacation in some of the Northwestern United States most beautiful scenery. Rykken wrote to the Packard Motor Company in 1948 seeking parts for the 32 and these letters on Packard Motor Company letterhead still accompany this car. This Packard was regularly used by the Rykkens until the late 1940s when it was parked with the hopes that it would later be restored. In 1977, Norman Rykken, son of C.T. Rykken, acquired the car from his father and begun assisting him with the restoration. After a full restoration was completed the car once again served the Rykken family for the following three decades. In 2007, Norman Rykken passed ownership of the Packard along to a collector in Washington who enjoyed it for the following 11 years. This Packard Deluxe Eight presents wonderfully today, displaying 46,000 miles on the odometer and showcasing some slight patina that is expected on a 30 plus year old restoration. An outstanding amount of period and reproduction Packard documentation accompanies this Deluxe Eight in addition to restoration photos, previous registrations, purchase and registration documents dating back to the 1930s and much more! With such well known history, excellent documentation and wonderful condition this 1932 Packard is sure to bring many years of enjoyment to its next caretaker. We are proud to offer this 1932 Packard Deluxe Eight Coupe Roadster to the most particular collector or investor who appreciates outstanding documentation and the legacy of the Packard Deluxe Eight. Ready to make aninvestment that you can actually enjoy?Classic carshave proven to be among the most resilient and rewarding investments in recent years with the Historic Automobile Group Index (HAGI) jumping 39% in 2013, 16% in 2014 and 17% in 2015 while posting gains of 467% over the last 10 years. Pleasecontactone of our expert sales consultants for more information. They will be happy to give you a complete walk-around, supply you with a more detailed description and answer any questions you may have. Buy with confidence. HISTORY OF THE 1932 PACKARD DELUXE EIGHT ROADSTER COUPE For 1932 Packard continued to set the marque high for automotive luxury. The companys new ride control offered three settings ensuring a smooth ride on both paved and unpaved surfaces.The Deluxe Eight line chassis was lengthened to 142.5 and featured a new double-drop frame with x-bracing. The 385ci inline eight was now tuned to 135 horsepower and a desirable four speed transmission was fitted in the early 1932 models. Packards 903 models consisted of ten factory bodied offerings for 1932, ensuring a Deluxe Eight for even the most discerning clientele. Body style 519, the Deluxe Eight Roadster Coupe was perhaps the most stylish with a full folding convertible top that disappeared into the body line, resulting in a roadster appearance with an optional rumble seat for an additional two passengers. With timeless style and performance, it is no wonder why the 1932 Packard Deluxe Eight Roadster Coupe has gained such appeal with collectors today.

This 1932 Packard Deluxe Eight was listed for sale on 2-25-19 12:56:36. The vehicle color is not available and VIN is not available . Kindly check ad for seller's location. Seller`s stock ID is danie407122_Deluxe8. There are 20 other Packard cars currently listed for sale on our website. You may desire to see what other Packard cars are selling for by visiting our Sales Data page.

Note from the publisher:
Welcome to our collector car marketplace where we feature thousands of classified ad listings of vintage cars for sale. We hope that you will bookmark our site and visit often; our cars are updated every day. Furthermore we encourage you to subscribe to our mailing list so that we may periodically notify you of interesting classic cars that become available.
Home > Classic Cars For Sale > Packard > Deluxe Eight > 1932 Packard Deluxe Eight