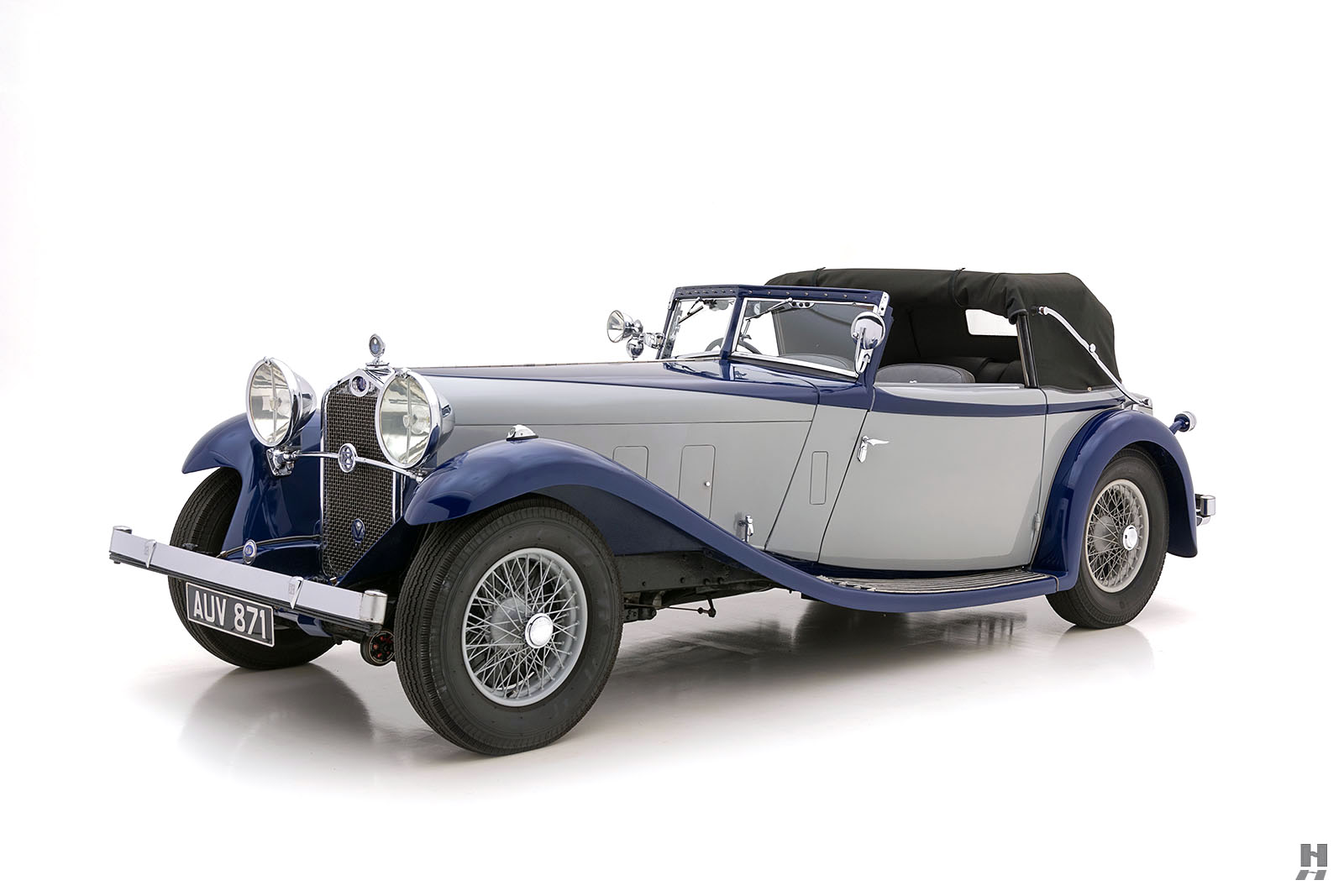 Price: USD $495,000
The American-born stylist engineer and designer Howard Dutch Darrin got his start in the coachbuilding industry shortly after World War I. He had been a pilot for the US military serving in France. It was there where he met fellow designer Tom Hibbard. Hibbard previously worked for Brewster before leaving to form Le Baron Carrossieres alongside Ray Dietrich. He had been in France exploring opportunities to sell and produce Le Baron designs there when he met Howard Darrin in 1923. The two men stayed in Paris and formed Hibbard & Darrin designing a series of spectacular bodies for many of Europes finest motorcars. Darrin was instrumental in developing a new type of alloy casting technique specifically for car bodies intended to replace squeaky and temperamental wood joints in critical structural points.When Tom Hibbard took a job at GMs Art & Colour Section in 1931 Darrin stayed in Paris and partnered with a South American-born banker named J. Fernandez who had interests in fine furniture as well as custom car bodies. The partnership was ideal for Darrin as Fernandez acted primarily as the money man leaving Darrin free to create his sophisticated and flamboyant designs with little oversight. As with Hibbard & Darrin the bodies created by Fernandez & Darrin sat atop the worlds finest automobiles including Rolls-Royce Hispano-Suiza Delage Packard and Duesenberg. It was one of Darrins most fruitful periods and he amassed a vast portfolio of breathtaking designs. Common threads among Fernandez et Darrin bodies included an emphasis on lowness with masterfully graceful lines and a sense of effortless motion in every curve. Fernandez and Darrins partnership may have lasted only five years but the Americans brilliance shone brightly during this brief yet fertile period in his storied career.One of the most influential designs born of Fernandez et Darrin is this breathtaking four-passenger cabriolet atop a Delage D8S chassis. Car number 35880 is one of only two such examples built in this dramatic style both utilizing the superb high-performance Delage D8S as a base. Staggeringly beautiful the design has classic long hood/short deck proportions and is masterfully detailed for maximum impact. Darrins placement of the spare wheel at the rear adds visual length while the curvaceous front wings flow gracefully into the full rear fenders which enhance the low-slung profile. The steeply raked compound V windscreen is of particular note as it gives energy and motion to the design. While subtle the detail is used to dramatic effect on this Delage and the styling cue was widely mimicked by other great designers including Alexis de Sakhnoffsky and Ray Dietrich. Viewed as a whole the Darrin-penned D8S Cabriolet is nothing short of a masterpiece of early art-deco automobile design.Records indicate that both sister cars were sold new in England and that chassis 35880 was first registered in November 1933 under the number AUV 871. While little else is known of its early history 35880 emerged in the 1950s in a tired state parked alongside a garage in Wellesbourne Warwickshire. In 1957 a young man of just 23 years discovered the Delage among some other interesting old motors offered for sale by Mr. Bernard Thorpe. After having dropped one too many motorbikes the young man decided a car would be a safer bet. From the moment he first spotted the mighty Delage it was love at first sight. A brief road test and a bit of haggling ensued and the men struck a deal. The beautiful Delage was now his for the princely sum of 15 quid.The mans love for the Delage proved as strong as any and it remained in his care for the next 63 years. Initially he drove the big Delage as his everyday transport but by 1966 a career and growing family forced him to move the D8S into long-term storage. He had to wait twenty years to drive it again but in the late 1980s the Delage re-emerged after completely rebuilding the original engine. Additional cosmetic restoration work followed including refinishing it in a handsome dark blue and gray livery fitting new light grey leather trim and painstakingly restoring the detailed hardware and body fittings.In the years since its restoration the D8 S was driven and enjoyed as its creators intended. It was showcased on the VSCC stand at the 2000 Classic & Sportscar show earning the top prize of Car of the Show. More recently it has seen regular use in VSCC tours and similar events throughout England and it has proven to be a most enjoyable high-performance motorcar. With the restoration now approaching 30 years old it has taken on an inviting patina that encourages continued enjoyment. The paint and bodywork are in good order displaying the honest character that comes from so many years of care. Beautiful details abound including the big Marchal headlamps radiator stone guard D8-motif searchlight bracket deco door handles and the D8 badge headlight tie bar.Of 2000 D8 chassis produced just 99 left the works as the high-performance S variants. The S models had a shortened lowered chassis and a 120-horsepower version of the 4061 cc OHV inline eight-cylinder engine. This car retains its original engine (no.106) which was completely rebuilt with new sleeves pistons and more at the time of the restoration. It is in good running order and needs little to prepare it for long-distance touring or rallies.The Delage D8S stands among the most desirable sporting motorcars of the 30s. This example goes one better boasting fascinating history and above all breathtaking coachwork from the fertile mind of Howard Darrin while at the height of his career.Offers welcome and trades consideredFor additional details please view this listing directly on our website https://hymanltd.com/vehicles/6722-1933-delage-d8s-cabriolet-by-fernandez-et-darrin/

Note from the publisher:
Welcome to our collector car marketplace where we feature thousands of classified ad listings of vintage cars for sale. We hope that you will bookmark our site and visit often; our cars are updated every day. Furthermore we encourage you to subscribe to our mailing list so that we may periodically notify you of interesting classic cars that become available.
Home > Classic Cars For Sale > Delage > D8S > 1933 Delage D8S