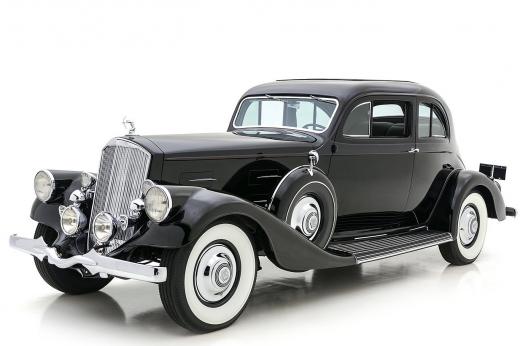 Price: USD $249,500
From George Pierces first single-cylinder Motorette in 1901 to the final twelve-cylinder chassis built for engineer Karl Wise in 1938 Pierce-Arrow stood proudly for quality craftsmanship and luxury. Along with Packard and Peerless the Buffalo New York firm produced some of Americas finest luxury motorcars earning a loyal clientele along the way. Despite the impeccable reputation Pierce-Arrow like many of its high-end contemporaries struggled with a limited dealer network and financial instability. A takeover by bankers after World War I saw Pierce-Arrow slow to respond to buyers wishes and their products soon became stale and dated. Help arrived in 1928 when Pierce-Arrows president met with Albert Erskine of Studebaker to negotiate a merger. The partnership allowed Pierce-Arrow to operate independently and it gave them the cash necessary to finally introduce their long-overdue L-Head inline eight-cylinder engine which temporarily at least boosted sales in conjunction with their improved dealer network. In 1931 chief engineer Karl Wise proudly unveiled his entries into the hotly-contested multi-cylinder race a pair of V12 engines of 398 and 429 cubic inches. Unfortunately the partnership between Studebaker and Pierce-Arrow was short-lived as Studebaker fell into receivership in 1933 and cut Pierce free now forced to survive as an independent amid the Great Depression.Desperate to survive and to shake their conservative image Pierce-Arrow management hired Phil Wright away from GM to act as a consultant and design a new flagship that would showcase Pierces capabilities to the world. The resulting twelve-cylinder Silver Arrow was a streamlined futuristic sensation. It made its grand debut at the 1933 New York Auto Show with the sloganSuddenly its 1940!The breathtaking machine featured fully enveloped front fenders no running boards and a distinct fastback roof treatment and triangular rear window opening. The design was a marvel; however the shocking $10000 price tag kept even the wealthiest customers away during the austere period of the early 1930s. Only five were built although elements of its advanced design influenced Pierce-Arrows regular production cars later in the decade. In 1934 the Silver Arrow name reappeared on a grand and imposing flagship 4-seater coupe. The styling drew heavily from Phil Wrights original particularly in the shape of the tapered rear end and the distinctive gun-slit rear windows. Despite the stunning design the production Silver Arrow did little to slow Pierce-Arrows precipitous slide toward bankruptcy as sales lagged and the company folded for good in 1938.This stunning 1934 Pierce-Arrow 1245 Silver Arrow is one of just 1740 cars produced in total by the company that year. As Pierce emerged from its partnership with Studebaker it introduced three new models to the buying public: The eight-cylinder 840A and the twelve-cylinder 1240A and 1248A. Of those the Silver-Arrow coupe sitting atop the big 144-inch wheelbase 1240A chassis was the most dramatically styled. Buyers could equip their Silver Arrow coupe with either the eight or twelve-cylinder engine. Ultimately not enough buyers stepped forward to make much difference in Pierce-Arrows bottom line and the company filed for bankruptcy in August 1934. Unfortunately few of the production records survived when receivers dispersed Pierces assets a few years later. But marque experts estimate that approximately 43 Silver Arrows left the works in 1934 along with an additional four cars in 1935. Historians believe that about 16 of these incredible automobiles are known to exist today.The 1240A Silver Arrow is certainly no shrinking violet; it is an imposing motorcar with bold styling and tremendous presence. This examples gorgeous two-tone black and gray color scheme lends it a slightly sinister appearance highlighting its sweeping curves and crisp lines. The restoration is superb exhibiting exquisitely finished paint and bodywork. Concours-quality chrome plating on the lamps grille bumpers and trim is all beautifully bright and clear. Accessories include dual covered side mount spares dual senior Trippe lights running lights chrome trumpet horns full wheel covers and of course the iconic Archer mascot.Inside the spacious cabin lovely gray patterned fabric upholstery graces the seats and interior panels. Superb two-tone wood trim features on the doors and dash top complemented by the woodgrain-painted metal dash that mirrors the pattern of the door trim. Instruments gauges and controls are restored to a very high standard and presented in superb condition. Lovely details abound including the armchair-style rear seats intricately hinged sun visors and original factory-option radio.Pierce-Arrows 462 cubic-inch V12 is an oft-underappreciated gem of the Classic Era. Pumping out an impressive 175 horsepower it was one of a scant few engines that could match Cadillacs V16 for outright power. And since it was a more conventional L-head design versus the Cadillacs advanced overhead-valve design the Pierce was seen as more durable and easily serviced. Lifting the hood on this car reveals the gorgeous twelve-cylinder engine finished in black porcelain alloy and chrome to all to concours standards. The undercarriage is similarly well-detailed with polished stainless steel exhaust and high-quality paintwork on the frame and suspension components.Showing evidence of gentle use since its restoration this superb Pierce-Arrow 1240A would be equally at home at concours events or wafting along on any number of CCCA CARavan tours. It is a CCCA Senior Award winner and has appeared at the Elegance at Hershey and in a special display at the Gilmore Museum in Michigan. Rarity stunning design and engineering excellence come together in this uniquely impressive and beautiful Pierce-Arrow.Offers welcome and trades considered

Note from the publisher:
Welcome to our collector car marketplace where we feature thousands of classified ad listings of vintage cars for sale. We hope that you will bookmark our site and visit often; our cars are updated every day. Furthermore we encourage you to subscribe to our mailing list so that we may periodically notify you of interesting classic cars that become available.
Home > Classic Cars For Sale > Pierce-Arrow > Silver Arrow Twelve > 1934 Pierce-Arrow Silver Arrow Twelve