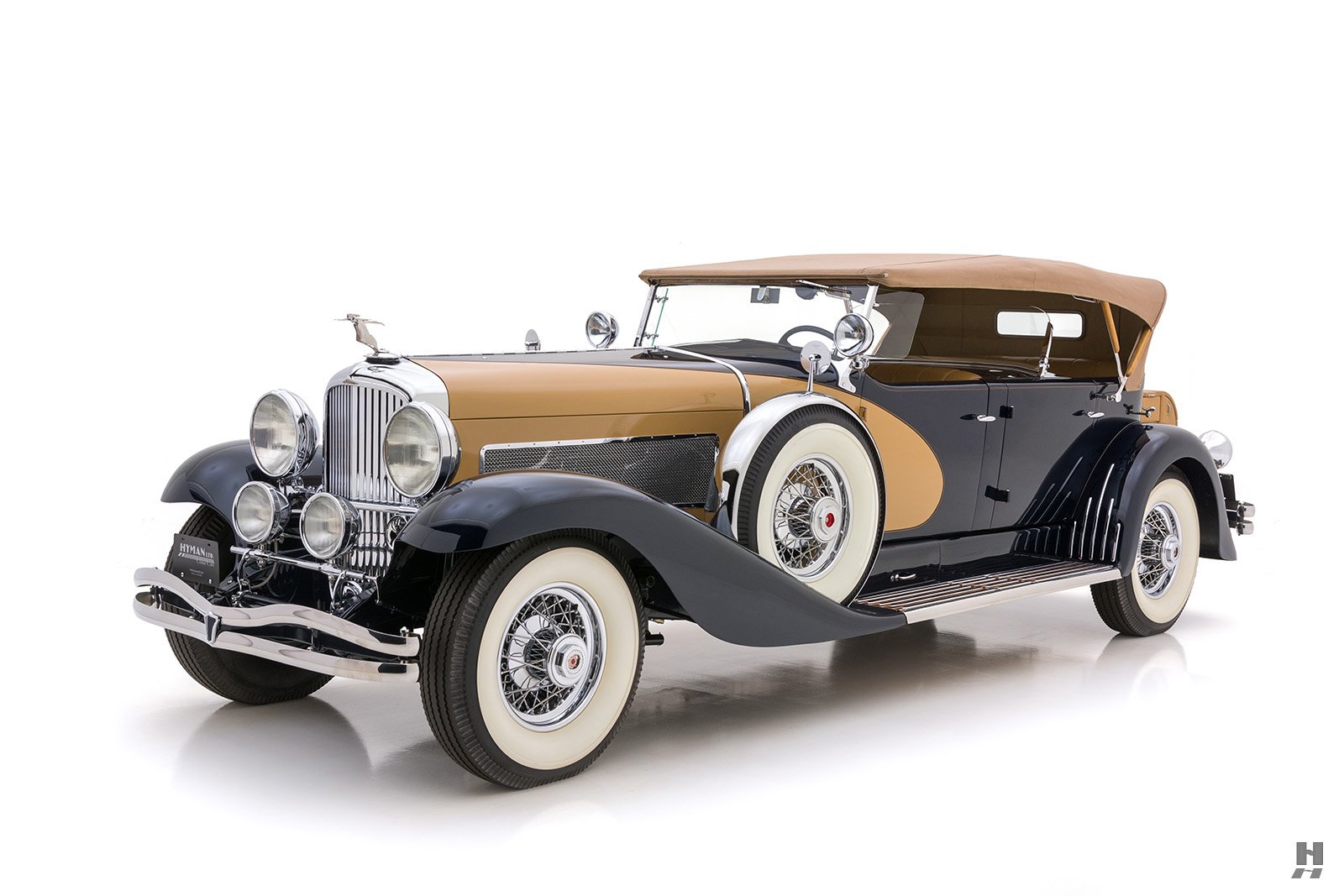 Price: USD $1,250,000
Within moments of its unveiling at the New York Auto Show on December 1 1928 the worlds business moguls movie stars and social elite lined up for their chance to own the glamorous new Duesenberg Model J. At its heart lay a 420-cubic inch Lycoming-built inline eight-cylinder engine featuring twin overhead camshafts and four valves per cylinder rated at 265 horsepower in naturally aspirated form. The robust chassis was beautifully engineered with powerful hydraulic drum brakes and fully automatic chassis lubricating that operated every 30-60 miles. The Model J vanquished everything else on the road and was by far the fastest most exclusive and most expensive car in America. At nearly $10000 for a chassis alone sales never quite lived up to E.L. Cords hopes of 500 vehicles per year and sales topped off at just 481 cars in total. Today the Model J and its derivatives stand as the Gold Standard of Classic Era automobiles and hold a place of pride among the most iconic and desirable motorcars ever produced in America.THE PRESIDENTS COMPANY CARDuring the height of the coachbuilding era from the 1910s through the late 1930s it was not uncommon for wealthy owners to have a favorite coachbuilt body they would recondition and move between new chassis every few years. This practice saved the considerable expense of building a new body each time which in some instances could exceed the cost of a chassis.Lucius B. Manning was no exception to this practice and as President of Duesenberg Motors had at his disposal a sweep panel dual-cowl phaeton penned by the great Gordon Buehrig and constructed under theLaGrandelabel by Union City Body Company. Buehrigs take on the shape was considerably cleaner than earlier LeBaron versions of this design especially when paired with the long-wheelbase chassis as Mr. Mannings body was.Mr. Manning used that phaeton body on no fewer than four different Model J Duesenberg chassis of which this car chassis number 2592 with engine number J-562 was one. For about a year it was driven by Mr. Manning in Chicago where Cord Corporation had its base of operations. When an order for a new Duesenberg chassis came through Manning allowed his chassis to be taken for the sale (he had before and would again) and it was re-bodied as a Willoughby Berline for delivery to a lucky owner.The Willoughby body on 2592/J-562 was removed years later and A.T. ONeill sold the chassis to the well-known collector Hubert Fischer of Minnesota. Mr. Fischer was a passionate Duesenberg enthusiast who owned several Model Js during his long involvement in the hobby. Well aware of the cars significance he had Mr. Mannings original LaGrande Dual-Cowl Phaeton body recreated by respected craftsman Harold Orchard of California whose work was extremely highly regarded. It is important to note that the curvaceous skirted fenders which are of the type added to many later Duesenbergs are correct as Mr. Mannings original LaGrande body was so-modified during his tenure.The car remained with the Fischer family for many years during which time it was regularly shown at various Midwestern concours delegance. It was eventually acquired from them by the well-known enthusiast Gerry Shaw of Connecticut and Florida who commissioned a cosmetic restoration finished to a very high standard. The car was entrusted to well-known Duesenberg technician Brian Josephs Classic & Exotic Service in Troy Michigan for an engine rebuild and installation of one of their highly regarded reproduction superchargers upgrading the engine to ultimate SJ specifications.Stunningly presented in cobalt blue with khaki sweep panels the Duesenberg features biscuit tan leather coordinated with blue carpets all of which is in superb condition as is the tan cloth top and upholstered correct trunk. Gorgeous period-correct fitments and accessories include six chrome wire wheels shod in wide whitewall tires polished side-mount spare wheel covers dual tail lamps dual spotlights and dual Pilot Ray driving lights. This striking Duesenberg was presented at the Greenwich Concours dElegance in 2014 and awarded Best of Show a testament to the elegant and classic lines of its beautiful design as well as its magnificent restoration.Years of exhaustive work have been poured into this Model J to make it just as it was when Duesenbergs top man enjoyed it on a daily basis and this striking machine would be no less enjoyable to drive and show today. It has made very few concours or show appearances since its star turn at Greenwich and would surely be a welcome sight in Auburn Cord Duesenberg Club AACA or CCCA circles and would be most at home blasting along with fellow enthusiasts on the Duesenberg Tour.Offers welcome and trades consideredFor additional details please view this listing directly on our website https://hymanltd.com/vehicles/6946-1935-duesenberg-model-j-dual-cowl-phaeton/

Note from the publisher:
Welcome to our collector car marketplace where we feature thousands of classified ad listings of vintage cars for sale. We hope that you will bookmark our site and visit often; our cars are updated every day. Furthermore we encourage you to subscribe to our mailing list so that we may periodically notify you of interesting classic cars that become available.
Home > Classic Cars For Sale > Duesenberg > Model J > 1935 Duesenberg Model J