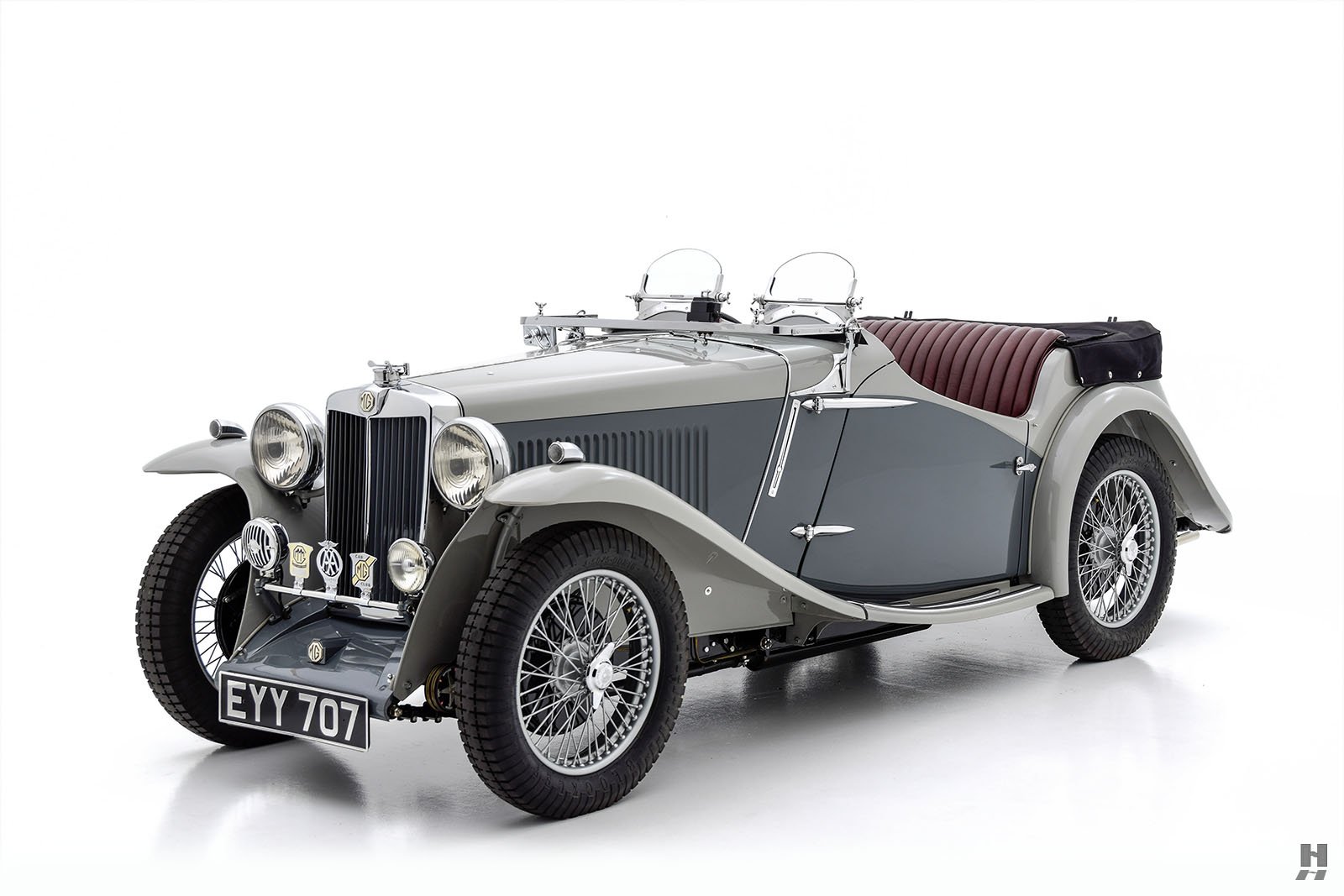 In 1934 MG introduced the N-Type a new six-cylinder model that would ultimately prove to be the final evolution of the storied Midget Magna and Magnette series. Between 1929 and 1936 the Triple-M cars established the tiny English marque as a significant force in international motorsport. With backing from Morris Cars founder Lord Nuffield MG boss Cecil Kimber developed his sports cars into world-class competitors in trials rallying and road racing. While the tiny four-cylinder engines proved robust and reliable it was the exotic and powerful overhead cam inline-six that made the largest impact on MGs image.The new N-Type would receive a refined version of the 1271 c.c. six-cylinder engine that also powered the legendary K3 Magnette race cars to victory in the Mille Miglia RAC Tourist Trophy and the Le Mans Index of Performance. In standard form with twin S.U. Carburetors the new N-Type engine saw a 25% increase in power over previous models thanks to the revised block and head. The most significant change for the N-Type came in the form of a redesigned chassis. The traditional ladder-type frame was ditched for a more sophisticated outrigger-type chassis with rubber body mountings to improve passenger comfort. Handling was also refined via a wider track and revised friction dampers. Performance was true to form for MG with 80 mile-per-hour capability in standard form and lively enjoyable handling. As with previous models the N-Type was offered with a choice of factory-built bodies. The most popular choice was the handsome roadster which MG offered in two-seat or four-seat configuration.For 1935 the NA evolved into the NB. The NB roadster was redesigned with a lower scuttle forward-hinged doors and refined flowing lines with beautiful Art Deco-inspired details. Also the engine was updated with the new double-breather block and the four-speed gearbox was revised with closer-spaced ratios and a friendlier clutch. Regular production NBs were all normally-aspirated. However customers often chose to upgrade their cars with a Marshall Under-Bonnet supercharger kit to create what many consider to be the ultimate Pre-War MG road car. Unfortunately just as the NB was hitting its stride Lord Nuffields sale of MG to the parent company Morris marked the end of Abingdons OHC six-cylinder era cutting production of all N-Types to just 737 examples as the marque changed focus to less expensive production-based pushrod engines.Chassis number NA0810 is one of just 98 two-seat NB Roadsters produced. This beautiful NB comes to us from a collection of some of the finest Triple-M MGs in the world and this example is no different from its stablemates. The current owner purchased this car out of England from the late Peter Gregory a highly respected pre-war MG restorer collector and enthusiast. Mr. Gregory had restored this particular car for the first time in the 1970s at the time verifying it as an original and genuine 2-seat NB roadster. The cars current caretaker brought the car to the US in early 2005 and promptly turned it over to Tom Metcalf of Safety Fast Restoration in Mansfield Ohio. In Toms hands this rare and very special NB was meticulously restored from the ground up to concours standards. Numerous photos and a stack of invoices totaling nearly $200000 document the extensive three-year project.The result of those efforts is a genuinely spectacular motorcar that has proven its mettle with class wins at the Amelia Island Concours dElegance Hilton Head Motoring Festival Ault Park Concours and Meadowbrook between 2008 and 2010. The Brooklands Gray over Abingdon Gray livery was a rare factory-offered color scheme that looks particularly attractive against the dark red leather cockpit. This handsome NB roadster presents in beautiful condition showing only light and careful use since the restoration was completed. Paint quality and finishing are befitting of a concours-winning car while the body features correct fittings such as King of the Road headlamps and spot lamp correct Lucas trafficators and a folding windscreen backed by twin Brooklands Aeroscreens.The cockpit is trimmed in period-correct dark red leather supplied by Triple-M specialist Mike Collingburn of England. The leather is beautifully finished and shows only very light signs of use on the seat bases. Carpet is correct red wool and the burled walnut dash is exquisite fitted with a full array of original instruments restored by British Jaeger specialist John Marks of Vintage Restorations. Additionally a full set of factory correct weather equipment stows neatly in a pouch behind the seat.Beneath the bonnet MGs legendary double breather 1271 c.c. OHC inline-six has been thoroughly updated with an EN40 billet crankshaft and billet connecting rods for durability. This car wears a highly desirable and period-correct Marshall IZ87 Under-Bonnet supercharger to provide a welcome boost in performance. As expected the engine is meticulously detailed with factory correct finishes and fittings down to the spare set of period Lodge spark plugs.This fabulous and endearing MG NB is undoubtedly one of the finest of its kind available. The additional power from the Marshall blower combined with the chassis refinements of the NB creates one of the most enjoyable and tractable of all the Triple-M MGs. Its rarity and exquisite presentation ensures its entry into a wide range of concours and driving events worldwide.For additional details please view this listing directly on our website https://hymanltd.com/vehicles/6176-1935-mg-nb-roadster/