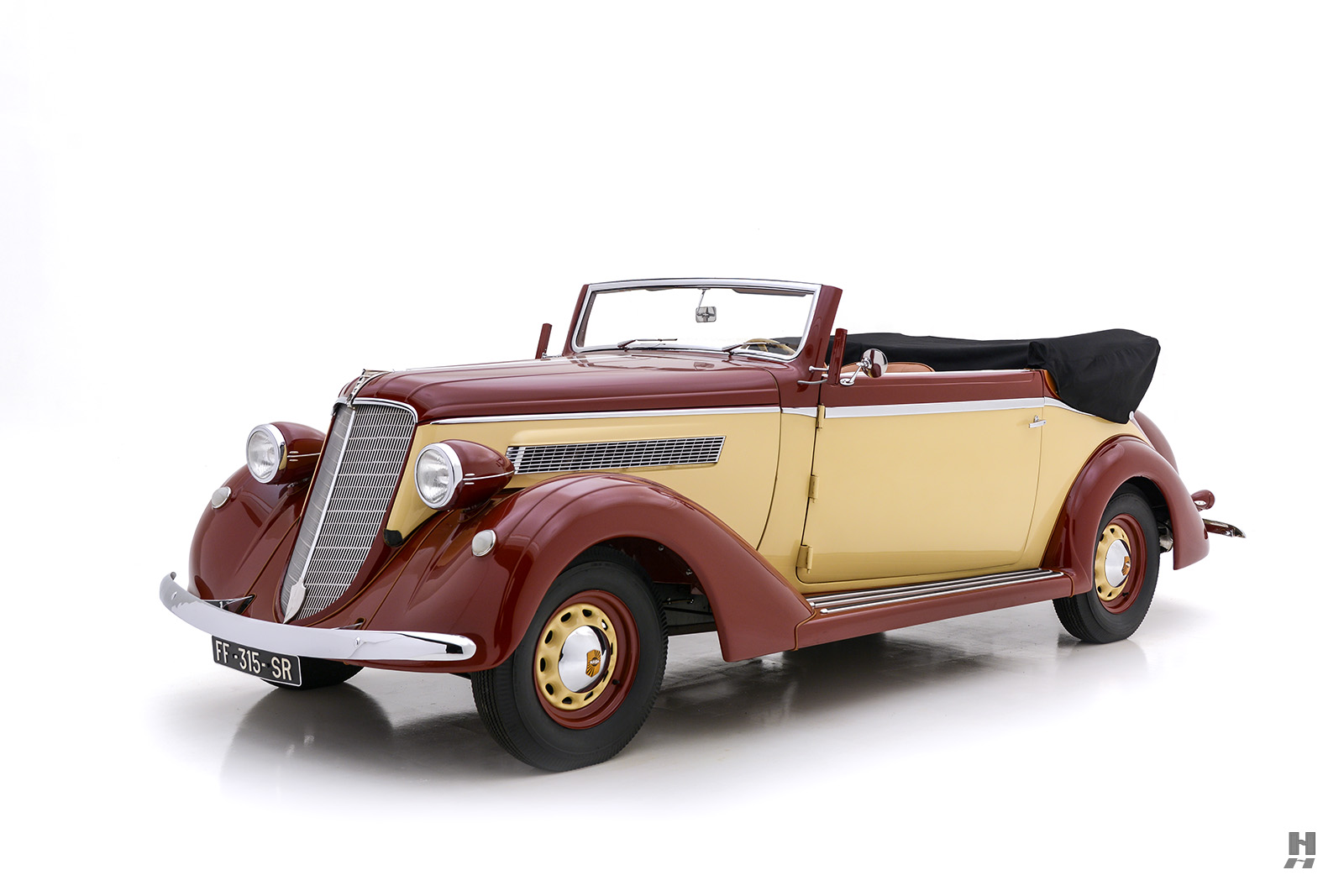 Price: USD $179,500
Of all the American independents Nash of Kenosha Wisconsin has a particularly fascinating story. Company founder Charles Nash is a genuine rags-to-riches character who ran away from indentured servitude at the age of 12 eventually landing a job as a cushion stuffer at Flint Road Cart Company owned by William C. Billy Durant and J. Dallas Dort. Streetwise and hard-working Nash steadily rose through the ranks winding up as manager of the Durant-Dort Carriage Company. Working closely with Durant Nash was put in charge of Buick by 1910 and managed all of General Motors just two years later. However like most people in Durants inner circle the two men had a falling out and Nash left GM to strike out on his own.Charles Nash acquired the remains of the Thomas B. Jeffery Company (producers of the original Rambler) and formed Nash Motors Company in 1916. The first few cars were leftover models badged as Nashes to use up existing stock so it wasnt until 1918 that the first pure Nash hit the market. Buyers and critics commended the new Nash for its neat and tidy styling refined Cardan-drive drivetrain and powerful overhead-valve engine designed by former Buick engineer Erik Wahlberg. Nash quickly earned a reputation for high-quality stylish cars at competitive prices and was often in direct competition with Hudson in the mid-priced market. In the 1930s the influential designer Alexis de Sakhnoffsky worked with Nash to create a line of beautiful streamlined bodies that complemented the powerful six and eight-cylinder engines. The top-of-the-line Ambassador was particularly stylish with deeply skirted fenders and a flowing fastback roofline reminiscent of the Chrysler Airflow. In classic Nash tradition the Ambassadors 260.8 cubic-inch inline-eight featured overhead valves and delivered its 100 horsepower with notable refinement. The advanced and robust drivetrain earned it a loyal following even finding favor with European buyers who appreciated the Ambassadors lively performance durability and value.This fascinating 1935 Nash Ambassador Cabriolet is one of a mere handful of Nash automobiles in history to feature bodywork by an outside coachbuilder. Even more unusual is this Ambassadors European origins and its distinctive coachwork by the highly-respected firm Glser-Karosserie GmbH of Dresden Germany. First registered in Denmark in August 1935 little is known of the first owner. Glser was a fitting choice to provide the coachwork for the big eight-cylinder Nash as they had a long tradition of creating high-quality bodies for prestigious marques like Daimler Horch Steyr and others. They also bodied a select few American cars and the well-engineered Nash platform suited their style and quality. This example is understood to be the only one of its kind; however Glsers production records did not survive World War II.After being hidden away during the war the Nash-Glser quietly remained in Denmark for many years. It resurfaced and was acquired by a renowned collector of rare and unusual Nashes. Following the acquisition he commissioned an extensive ground-up restoration performed by a noted specialist in Europe. Time had taken its toll on the structural woodwork which restorers methodically recreated using the original pieces as patterns. The restoration team worked to preserve as much of the original sheet metal as possible recreating new segments only when necessary. The owner selected a suitably bold color scheme of maroon and cream with matching two-tone wheels and a tan interior to complement the cars Art Deco origins. Since completion the restoration has taken on a pleasant character with use and it wonderfully suited to regular enjoyment or show. The striking livery suits the design quite well and recently-installed period-correct black wall bias-ply tires round out the authentic presentation.The European influence of the coachwork carries over into the five-passenger cabin. Substantial vault-like doors open to reveal individual front seats trimmed in lovely natural tan leather upholstery. Door panels rear seats and carpet bindings feature the same matching leather. The bold woodgrain-effect dash is a distinctly American feature with art-deco detailing and beautiful center-mounted rectangular instruments including a speedometer calibrated in kilometers. Other noteworthy details include gorgeous wood door caps curved Perspex visors and a sporty Bluemels Brooklands steering wheel. The black canvas top is in good condition and features a matching canvas boot cover.Beneath the hood sits the powerful and refined 260.8 cubic-inch overhead valve Nash inline-eight. It is well-detailed showing good quality paintwork with period-correct fittings and hardware. The goal of the restoration was to create a good looking and equally good performing car for road events and rallies. The previous owner reported a trouble-free run in a 500-mile rally shortly after completing the project and in 2020 it participated in the Amelia Island Concours dElegance reflecting both the quality of the restoration and the robust Nash underpinnings. The Classic Car Club of America granted it Full Classic status putting it in a select group of cars from Kenosha to receive that honor. It shows today in excellent order suitable for continued enjoyment in tours and shows and would be a splendid addition to a collection of American Independents or other rare coachbuilt motorcars.Offers welcome and trades consideredFor additional details please view this listing directly on our website https://hymanltd.com/vehicles/6682-1935-nash-ambassador-glaser-cabriolet/

Note from the publisher:
Welcome to our collector car marketplace where we feature thousands of classified ad listings of vintage cars for sale. We hope that you will bookmark our site and visit often; our cars are updated every day. Furthermore we encourage you to subscribe to our mailing list so that we may periodically notify you of interesting classic cars that become available.
Home > Classic Cars For Sale > Nash > Ambassador > 1935 Nash Ambassador