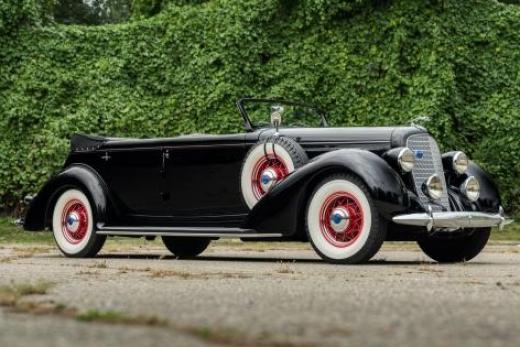 The Lincoln K-series was introduced in 1931, riding on a new 145 inch chassis and coming standard with 6.3 liter V8. By 1933, however, the multi-cylinder fever had swept across all American car makers and a 6.3 liter V-12 was made available, becoming standard equipment for 1934. Engine improvements continued and for 1936, the V-12 was updated with hydraulic lifters and revised cam while simultaneously moving the engine further forward in the chassis to provide more cabin room. Throughout its 10-year model run, Lincoln allowed buyers to choose between 17 different custom body styles while also choosing colors of both interior and exterior, providing each individual buyer the opportunity to highly customize their vehicle to their tastes. Sales continued fairly strong throughout the 1930's, based heavily on brand loyalty and the sheer road presence of the K-series but Lincoln eventually caused their own inter-company issues when they introduced the far cheaper V-12 powered Zephyr. With sales dwindling due to more economically viable V-12 options and a war on the horizon, Lincoln ended production of the K-series in 1940.

This particular 1936 Lincoln Model K Convertible Sedan, chassis number K6205 and engine number K6205, is a matching numbers example, bodied by LeBaron in style 334. It is one of just 30 cars produced in this style and has a fantastic history. Believed to have been sold new to Wrigley family (of chewing gum fame), through a California dealership, the car was kept at the families famous Pasadena mansion on Millionaires Row. For the next 70 years, the car remained in California, eventually ending up in the collection of famed broadcaster Art Astor. The car remained with Astor until its sale in 2008 at which time it was treated to a sympathetic cosmetic restoration and has been maintained in fantastic condition both cosmetically and mechanically since then. As the car currently sits, it needs nothing and would make a welcome addition to any collection or would make for a fine choice for vintage touring events. Included with the sale of this car are the wheel wrench, and side-mounted spare covers.

Note from the publisher:
Welcome to our collector car marketplace where we feature thousands of classified ad listings of vintage cars for sale. We hope that you will bookmark our site and visit often; our cars are updated every day. Furthermore we encourage you to subscribe to our mailing list so that we may periodically notify you of interesting classic cars that become available.
Home > Classic Cars For Sale > Lincoln > K > 1936 Lincoln K