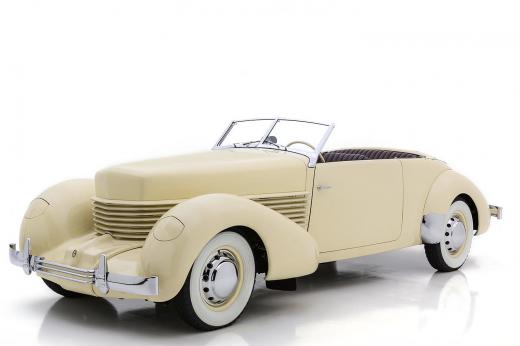 Price: USD $139,500
The highly advanced Cord 810/812 was born during troubled economic times of the mid-1930s. As many prestigious automakers saw their sales figures plummet some turned to mid-priced companion lines they hoped would bolster lagging sales of their extravagant high-end offerings. Cadillac in particular found success with the LaSalle range and even Packard offered entry-level models at various times through the 1930s. As the Great Depression wore on many of the few remaining buyers with the means to purchase extravagant cars were reluctant to flaunt their wealth. Even the once-mighty Duesenberg was not immune from the effects as ever fewer orders filled the books. Eager to attract new clients and cash in on the prestige of the Duesenberg name company boss E.L. Cord suggested a baby Duesenberg could compete in the increasingly busy mid-priced luxury car market. As development was underway the board balked and abandoned the project out of fear that it would cheapen the illustrious Duesenberg name.Despite the objections from Auburn-Cord-Duesenberg management E.L. Cord saw great potential in the preliminary design of the baby Duesenberg. He determined it would be the perfect basis for a dramatic resurgence of Cord Automobiles. Since the demise of the L-29 Cord wished for another car that bore his name and he now found the ideal opportunity. Cord revitalized the development of the car charging his engineers to push the technical envelope. Engineers and designers drew inspiration from multiple sources including Citroens revolutionary front-drive Traction Avant. The new Cord car was constructed using a semi-monocoque chassis front-wheel drive a pre-selector gearbox and independent front suspension. In place of the traditional radiator grille the great Gordon Buehrig and his team of designers drew a series of wrap-around louvers flanked by rounded fenders with retractable headlamps the first automobile so equipped. The squared-off hood resembled that of a coffin earning the car its ubiquitous nicknamecoffin-nose Cord. A lesson learned from the Cord L-29 was that the front-drive layout allowed the body to be set much lower than traditional front-engine/rear-drive cars allowing a rakish sleek appearance. In a stroke of genius Buehrig eliminated external running boards and brought the door lines fully down the body. Combined with the grill-less front end the sleek styling was breathtakingly futuristic and considered a masterpiece of automobile styling. Eight decades later the Cord 810 and 812 stands among the most celebrated American industrial designs and a necessity for any serious collection of Classic Era motorcars.This 1937 Cord 812 is a beautiful fully restored example with the highly desirable Convertible Phaeton Sedan body. This lovely 812 was once part of the famous collection of William A.C. Pettit III a former car dealer and founder of the Museum of Motoring Memories in Natural Bridge Virginia. As acquired by Mr. Pettit in the early 1990s this Cord was due for a full restoration so he turned it over to his friend and fellow collector Harry Van Iderstine. Mr. Van Iderstine was a well-known and respected authority in the Auburn-Cord-Duesenberg community with several award-winning restorations under his belt. He performed a well-researched thoroughly detailed restoration on Mr. Pettits Cord finishing it in the most appropriate shade of cigarette cream over an oxblood red leather interior. The color itself is the correct light cream shade as used by the factory in the 1930s and not the brighter yellow that is often represented as cigarette cream on other restorations. After nearly 30 years this Cord 812 still looks crisp and attractive with the paintwork mellowed to a warm luster beautiful chrome wheels and ribbed Goodyear whitewall tires. Under scrutiny some bodywork is visible beneath the paint although the minor imperfections do little to detract from what is a very high-level restoration. With its grill-less front end and hideaway headlamps the Cord 812 was shockingly modern in its day and the lack of excessive chrome trim accentuated its futuristic appearance. Only the bumpers wheel covers and a few minor fittings are in chrome which on this car are in excellent condition all around.Elegant deep red leather upholstery features inside with the body-color dash and steering column finished to original specification. The quality of the restoration is evident in the properly trimmed seats and door panels high-quality materials and gorgeous fully-detailed instrument panel. The seats display just the slightest signs of use in the leather which has taken on a charming character in the 30 years since the restoration. Restored instruments and controls are in excellent order including the door handles window winders and delicate miniature H-pattern gear selector.Raising the signature coffin nose hood reveals a tidy and well-detailed 289 cubic-inch Lycoming V8 engine. Period-correct hardware and fittings are consistent with this cars superb well-researched restoration and long history of attentive care. Power from the V8 goes through the correct style electromagnetic pre-selector 4-speed transaxle which drives the front wheels. It should be noted that while the chassis body and engine numbers (1339H C-91 368 and FB2454 respectively) do not appear in Josh Malkss referenceThe Cord Complete the serial number is consistent with the series of unsold 1936 810s that were renumbered by both the factory and dealers of the period to be sold as 812s. With its futuristic styling and iconic details the coffin nose Cords are seminal American collector cars. As one of a select few automobiles worthy of inclusion in the Museum of Modern Art in New York the Cord 812 is a masterpiece of American industrial design. This handsome example benefits from many years of cherished treatment in the hands of enthusiastic owners. The well-preserved restoration is now lightly matured making this an excellent choice for ACD Club or CCCA shows and touring events.Offers welcome and trades considered

This 1937 Cord 812 was listed for sale on 2-1-20 09:27:31. The vehicle color is not available and VIN is not available . Kindly check ad for seller's location. Seller`s stock ID is hyman6534. There are 1 other Cord cars currently listed for sale on our website. You may desire to see what other Cord cars are selling for by visiting our Sales Data page.

Note from the publisher:
Welcome to our collector car marketplace where we feature thousands of classified ad listings of vintage cars for sale. We hope that you will bookmark our site and visit often; our cars are updated every day. Furthermore we encourage you to subscribe to our mailing list so that we may periodically notify you of interesting classic cars that become available.
Home > Classic Cars For Sale > Cord > 812 > 1937 Cord 812