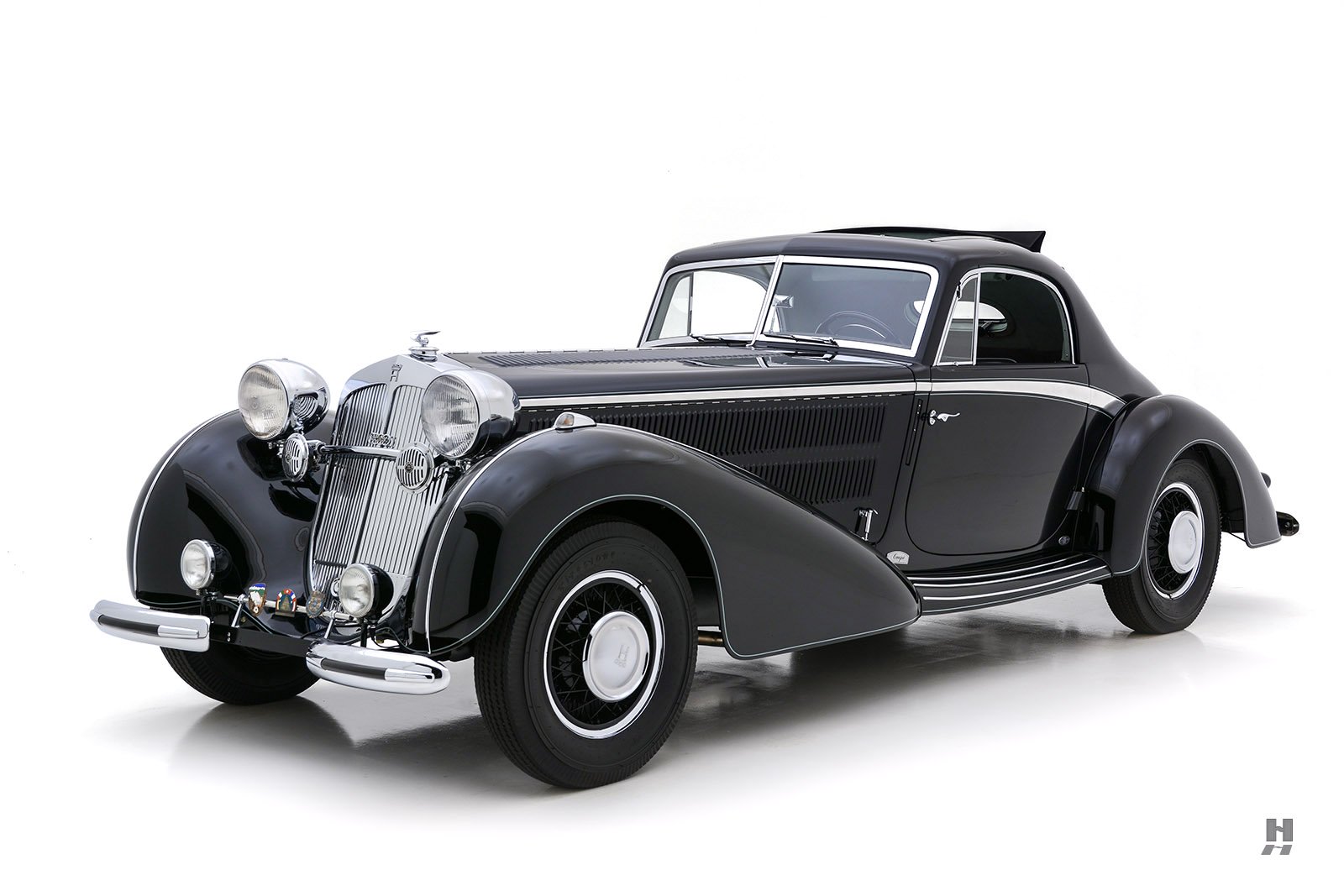 Price: USD $575,000
Once part of the mighty Auto Union combine Horch is one of the German motoring industrys proudest pre-war marques. Founded in 1900 by August Horch the firm steadily grew its reputation for engineering excellence and became a leading competitor to Daimler and Mercedes through the 1920s and 1930s joining Audi DKW and Wanderer to form Auto Union in 1932. In the middle of the 1930s the Auto Union Grand Prix team was locked in a fierce battle with Mercedes-Benz for supremacy on European racing tracks. The Germans saw motor racing as the ideal showcase for their engineering might and threw seemingly endless resources behind their national teams creating one of the greatest eras of technical advancement in the history of motorsport.As the power and speed of the cars grew exponentially drivers became national heroes. Auto Unions star was the great Bernd Rosemeyer who famously man-handled the fearsome mid-engine Silver Arrows (with upwards of 550 horsepower!) to victory in numerous races across Germany and the rest of Europe. He won the German Swiss and Italian Grands Prix to take the European Championship in 1936 and claimed four of the five Auto Union victories against Mercedes-Benzs formidable new W125 in 1937. He became an international superstar after winning the Vanderbilt Cup in 1937 and is still counted as one of the greatest racing drivers of all time.For their star driver Auto Union commissioned a spectacular automobile as a reward for Rosemeyers achievements. Based upon a special shortened 130-inch chassis from the flagship Horch 853 the car wore a stunning one-off streamlined coupe body designed by Johannes Beeskow and built by Erdmann & Rossi. The coachwork featured the curvaceous and graceful pontoon fenders of the Spezialroadsters combined with a unique flowing fixed-head roofline and well-judged chrome accents. Rosemeyer nicknamed the car Manuela and he regularly as his transport to racing events and even the occasional Concours dElegance alongside his wife Elly Beinhorn; herself an accomplished pilot.Sadly Rosemeyer didnt get to enjoy Manuela for very long as his life was tragically cut short in a record-breaking attempt on a stretch of the newly completed Autobahn. While attempting to beat a personal record of 268 mph his Auto Union streamliner caught a crosswind resulting in a spectacular crash. The 28-year-old Rosemeyer was thrown from the car and killed. The fate of Manuela is shrouded in mystery as the Horch disappeared from public view shortly after Rosemeyers death and was never seen again. Theories suggest it was either broken up by the factory or sacrificed to the impending war effort. Thankfully photos and documentation of the original car provided enough information for the creation of a small number of faithful homages to the original including one displayed in the Audi AG museum.Proudly offered here is a stunning and faithful tribute to Bernd Rosemeyers famous Manuela Horch 853 artfully constructed by Horch-Classic of Germany. The original Horch 853 donor chassis was discovered a barn in Belarus minus its coachwork. Per the original specification Horch-Classic shortened the frame to 130-inches before restoring it to full running order. For the coachwork Horch-Classic used images of the original car to create a wood body frame. Then Horch-Classic skinned the wood frame in steel panels. The attention to detail is impressive including the louvered bonnet swiveling side windows and a rare Glde fabric sunroof acquired after an exhaustive search. The car was then finished in black and accented with pale coach stripes and a dramatic polished sweep. Other fittings include genuine Horch headlamp lenses Bosch driving lamps twin chrome Bosch horns and semaphore turning indicators built into the body. The resulting car has a tremendous presence and is faithful to the original while seamlessly incorporating personal touches by the builders.With the coachwork underway the chassis was fully restored including the independent front end and De Dion rear axle. The engine completely rebuilt with new pistons bearings and overhauled cam and valvetrain. The rotating assembly and flywheel were balanced to ensure refined silky-smooth high-speed operation. The engine was then fully detailed with faithfully reproduced hardware plumbing and woven-fabric wiring loom. This car features the highly-desirable five-speed gearbox for superb high-speed touring performance.Black leather upholstery with contrasting piping provides a lovely complement to the paintwork. The upholstered instrument panel gives this Horch a businesslike sporting appeal. As with the coachwork the soft trim is beautiful finished to a high standard and presented in taut fresh condition. Authentic fittings instruments and hardware complete the package and a set of period-correct fitted luggage behind the seats provide a charming flourish to the cabin.Rosemeyers Manuela may be lost to history yet this superb recreation honors the spirit and style of the original with impressive levels of craftsmanship. Superbly crafted and used sparingly since the restoration this highly desirable German classic is prime for enjoyment in touring and road events worldwide.Offers welcome and trades consideredFor additional details please view this listing directly on our website https://hymanltd.com/vehicles/6558-1937-horch-853-coupe/

This 1937 Horch 853 was listed for sale on 10-26-19 08:05:23. The vehicle color is not available and VIN is 853433 . Kindly check ad for seller's location. Seller`s stock ID is hyman6558. There are other Horch cars currently listed for sale on our website. You may desire to see what other Horch cars are selling for by visiting our Sales Data page.

Note from the publisher:
Welcome to our collector car marketplace where we feature thousands of classified ad listings of vintage cars for sale. We hope that you will bookmark our site and visit often; our cars are updated every day. Furthermore we encourage you to subscribe to our mailing list so that we may periodically notify you of interesting classic cars that become available.
Home > Classic Cars For Sale > Horch > 853 > 1937 Horch 853