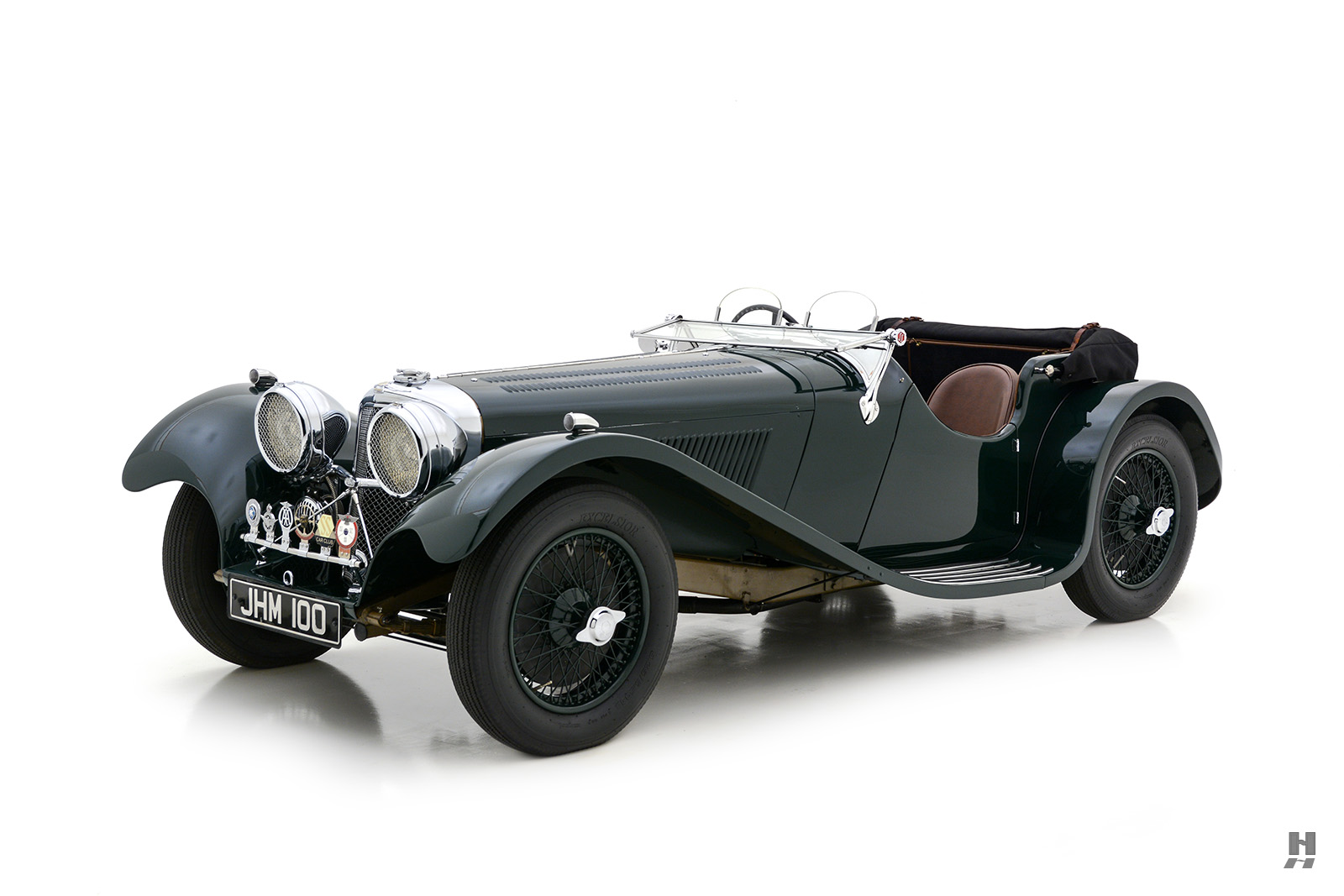 The company we know today as Jaguar Cars evolved gradually starting from a partnership between William Lyons and William Walmsley initially formed in 1922. Walmsley had a motorcycle sidecar business for some time before when Lyons joined him and together they founded Swallow Sidecar Company. Lyons had a keen sense of style and he designed a series of handsome sidecars intended to complement the motorcycle to which they were attached. They ventured into motorcars when Austin released the 7 and Lyons felt he could produce something altogether more attractive than its staid and practical factory bodywork. Swallow Sidecar Company soon branched into a full-fledged coachbuilder offering uniquely stylish bodies for the Austin Seven and eventually larger cars like the Wolseley Hornet and Standard Nine.The enterprising William Lyons soon bought out his partner Walmsley and continued growing his coachbuilding firm into a proper car company. Building on the success of his lovely Austin Seven bodies Lyons developed a close relationship with Standard Motor Company of Coventry and he drew closer and closer to building a complete car of his design. He grew frustrated with the limitations of the production chassis available to him so he persuaded Standards managing director R.W. Maudsley to produce a frame to Lyons specification that would accept a Standard driveline. With that SS Cars was born though it was never entirely made clear if that stood forStandard SwallowofSwallow Special.The SS 1 and its small-engine sibling the SS 2 debuted at the 1931 Olympia Motor Show to great acclaim. In practice the SS 2 was disappointing with Sir William Lyons himself admitting the car did not quite live up to its looks. But there was no such criticism of the six-cylinder SS 1 particularly in the handsome open tourer configuration. Eager to break into the sporting market Lyons expanded the model range in 1935 to include a smartly-styled 2-seat roadster called the SS 90 named so for its potential top speed. The handsome styling came from Lyons own pen featuring the long sweeping wings long bonnet and short deck that would become hallmarks of Jaguar styling into the 21st century. The SS 90 was undoubtedly a stylish machine although the production-based Standard engine left a bit to be desired in terms of refinement and performance. The company quickly addressed this later in 1935 with the introduction of the much-improved SS 100 Jaguar the first car to use of the companys future name. SS Cars brought in engineer Harry Weslake to reinvent the Standard engine into something altogether more potent. The 2 -litre version gave a significant enough boost in performance to warrant a name change to reflect the increased top speed. Enthusiasts quickly recognized the SS 100 Jaguar as a highly capable sports car and it was soon winning rallies and road races in the hands of privateers. The gorgeous styling and impressive performance continue to make the SS 100 Jaguar one of the most esteemed British sports cars of the pre-war era.Fabulously presented in British Racing Green with a saddle leather interior this SS 100 Jaguar is a gorgeous example of the quintessential pre-war English sports car. Chassis number 49026 is one of just 198 SS 100s built through 1938 and is a superb motorcar in every respect. The accompanying Jaguar Daimler Heritage Trust Certificate shows 49026 was completed on December 24 1937 and dispatched through Henlys Limited of London the official SS/Jaguar distributor at the time. The car was originally finished in black with a gray interior and fitted with the 2 -litre six-cylinder engine good for 100 horsepower. The original owner is not known; however the car came to the United States sometime in the early 1960s eventually coming into the stewardship of Mr. Robert Wood a successful businessman and philanthropist from Allentown Pennsylvania. The SS 100 stayed quietly in Woods collection for the next three decades. In the late 1990s it transferred to Gary Ford who undertook an extensive cosmetic restoration resulting in a Best in Class at the 2002 Amelia Island Concours dElegance.After passing through the hands of respected expert Brian Classic in England 49026 came into the care of Mr. John H. Murphy of Santa Fe New Mexico. He took the restoration to an even higher level to include reupholstering the cockpit in stunning saddle brown leather and extensively detailing the engine and mechanical components. Murphys efforts were rewarded with class wins at the 2005 Radnor Hunt Concours the 2010 Santa Fe Concorso and the Prewar Class Champion award at the 2007 JCNA National Concours. With subsequent owners it scored 999.8 points at the 2014 Jaguar Club of Houston concours and earned a well-deserved class win at the 2015 Pebble Beach Concours dElegance.In the hands of its most recent custodian this marvelous SS Jaguar has enjoyed meticulous care and regular enjoyment. It presents in superb condition with finish quality and detailing befitting a former high-level concours competitor. The paintwork is gorgeous and it beautifully highlights the exquisite styling. Body-color wheels and black wall tires give it a distinctly sporting and purposeful stance on the road particularly with the windscreen folded. It retains its numbers-matching inline-six per the Heritage Certificate and has been serviced and dialed-in for road use while in the care of its most recent owner. Some light signs of use are visible on the chassis and mechanical components which only serve to make the car even more inviting to drive. The sale includes black canvas weather equipment a partial tool kit original handbook and a factory parts book.The SS 100 is Jaguars first proper sports car and is also one of the best of the pre-war era. Cherished for their superb road manners and breathtaking style SS 100s rarely become available on the open market. The sale of 49026 represents an excellent opportunity to acquire a beautiful and proven SS 100 Jaguar suited to continued concours participation yet is also eligible for entry into the worlds premier driving events including the Colorado Grand and Mille Miglia.Offers welcome and trades consideredFor additional details please view this listing directly on our website https://hymanltd.com/vehicles/6600-1937-jaguar-ss-100-roadster/

This 1937 Jaguar SS 100 was listed for sale on 11-26-19 06:27:21. The vehicle color is not available and VIN is not available . Kindly check ad for seller's location. Seller`s stock ID is hyman6600. There are other Jaguar cars currently listed for sale on our website. You may desire to see what other Jaguar cars are selling for by visiting our Sales Data page.