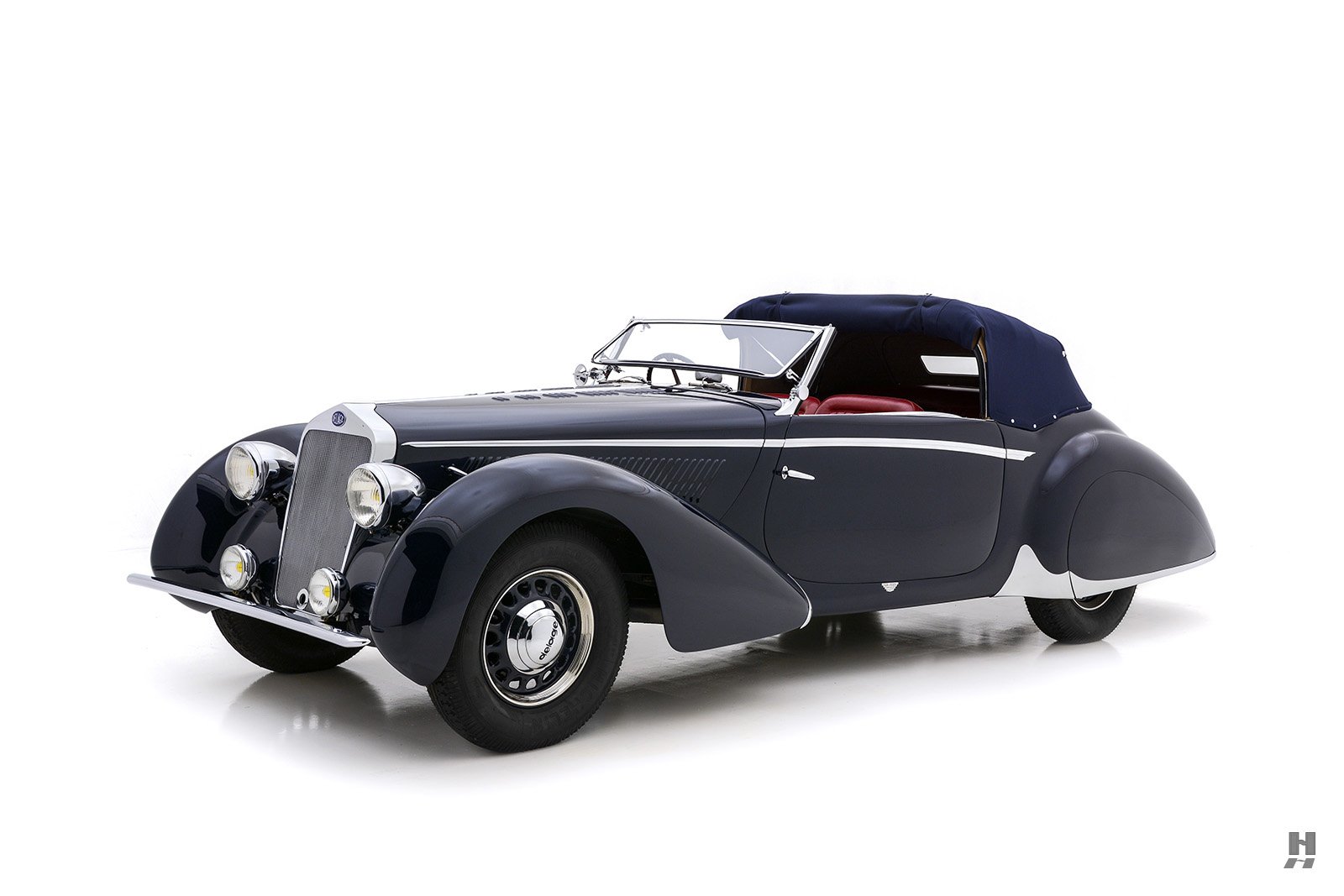 Price: Contact Seller for Price
Armed with just three employees and two lathes in a tiny workshop in Levallois-Perret Louis Delage began his journey to the top of the French motoring industry in 1905. As a former Peugeot man Delage knew from the onset to surround himself with talent and one of those three employees was previously Peugeots chief engineer. In the early years of his firm Delage primarily built smallvoiturettesutilizing de Dion-Bouton engines. However as his interest in motorsport grew so did the size and power of his motorcars. By 1910 a new factory was necessary to accommodate the demand for Delages successful new four-cylinder model. After the first world war production expanded again to include a six-cylinder model with ever-increasing performance. With the growth Delage achieved even greater success on the world motorsport stage becoming one of Frances most revered and successful marques.By the 1920s Delage hit its stride. Their beautiful and technically advanced automobiles were winning races around the world and finding favor with Frances cultural elite. But high development costs of the superb D8 and its six-cylinder sibling the D6 led to a financial crisis and bankruptcy loomed. Hometown rivals Delahaye swept in and took over Delage in 1935. Delages built after 1935 shared common architecture with Delahaye but the former retained their superior hydraulic brakes and robust short-stroke engine designs. In 1937 the flagship of the D6 series the D6-70 arrived. Powered by a 2729 cc overhead-valve inline-six the D6-70 was a great road car and a successful racer earning Delage victory in the 1938 Donington Park TT second overall at LeMans in 1939 and again ten years later in 1949.Roadgoing D6-70s typically received stylish coachwork worthy of their superlative performance and there was no more prestigious pairing than that of a Delage chassis with a Figoni et Falaschi body. Founder Giuseppe Joseph Figoni was born in Italy in 1894 and came to France when he was just three years old. As a teenager he apprenticed as a carriage-maker before serving in the French military for seven years. In 1923 he opened a body repair shop in Boulogne and quickly won the admiration of clients who called upon his skills for repairs and modifications. Figoni progressed into a full-fledged coachbuilderby1925 and ten years later partnered with Ovidio Falaschi a Tuscan businessman with a penchant for fast stylish motorcars. Falaschis financial backing allowed Figoni to experiment with increasingly flamboyant designs on the best chassis of the period all the while honing his exquisite sense of balance and proportion. FigonisGoutte dOr(drop of gold) coupe body on a Talbot T-150 chassis marked cemented his reputation as one of the most respected and reveredAvant-Gardecoachbuilders of all time.Wearing stunning 3-position drophead coachwork by Figoni et Falaschi this eminently desirable pre-war Delage D6-70 is a magnificent example ofle belles voitures Franaises. According to marque experts chassis number 51740 is the second in a series of four similar Delages bodied by Figoni et Falaschi between April and June of 1939. It wears its original coachwork verified by the Figoni serial number (757) found throughout the car. Delage and Figoni historians believe this example debuted at the 1939 Concours dElegance au Bois de Boulogne where it took home a well-deserved gold medal on its maiden outing. However the cars early concours career was cut short as war enveloped Europe and the owner hid it away in Portugal to keep it safe from occupying forces. It remained there after the war quietly undisturbed until its discovery in 1974. Following its discovery and sale to only its second owner 51740 was restored in Europe and lived a relatively low-key life before making its way to the United States in 2001. In 2006 the Delage joined the private collection of an enthusiast who lovingly maintained and enjoyed it on casual events and outings.This stunning Figoni-bodied Delage has recently been mechanically sorted and cosmetically freshened with gorgeous new paint a new convertible top and restored brightwork. Presented in a striking dark blue over red livery chassis 51740 is beautifully finished and equally suited for concours or touring use. Typical of most Figoni coachwork the body has near-perfect proportions with graceful curves and exquisitely judged details. The body-color steel wheels with fresh black wall Michelin cross-ply tires lend it all the presence and drama of the larger D8 yet in a more user-friendly package. Fine details include proper Marchal headlamps and driving lamps a multi-function opening and folding windscreen three-position canvas top and the signature chrome sweeps and highlights that define a classic Figoni et Falaschi body.The richly-appointed red leather cabin benefits from recent detailing and has taken on a charming character from the previous owners occasional use. It accommodates four passengers in comfort and the generous boot allows for ample luggage for long-distance touring. Wood on the dash and door caps is in excellent condition with a beautiful glossy finish. Switchgear instrumentation and controls all appear to be well-kept since the cars earlier restoration. As part of the recent refurbishment a new navy-blue canvas top was made to complement the exterior color.The numbers-matching 2.7-liter inline-six is in top-specification with triple Solex carburetors and a Cotal four-speed pre-select gearbox. The engine is well-detailed and recent mechanical sorting ensures the performance is on-par with the cars sublime looks. The D6-70 reveals itself as a true dual-purposeGrand Routierwith ample power sporty handling and an addictive exhaust note combined with a refined ride and luxurious trimmings. It is an enormously satisfying drivers car that has proven itself with a flawless performance on a recent road tour and it is prime for continued enjoyment.Combining racing pedigree with unrivaled style this marvelous D6-70 would be a perfect entry into virtually any prestigious touring event including the Colorado Grand California Mille or Copperstate 1000. Regardless of how its next caretaker chooses to enjoy it this stunning Delage will continue to impress just as it did when it first rolled out of the Figoni et Falaschi workshop in 1939.Offers welcome and trades consideredFor additional details please view this listing directly on our website https://hymanltd.com/vehicles/6458-1939-delage-d6-70-figoni-et-falaschi-drophead-coupe/

Note from the publisher:
Welcome to our collector car marketplace where we feature thousands of classified ad listings of vintage cars for sale. We hope that you will bookmark our site and visit often; our cars are updated every day. Furthermore we encourage you to subscribe to our mailing list so that we may periodically notify you of interesting classic cars that become available.
Home > Classic Cars For Sale > Delage > D6-70 > 1939 Delage D6-70