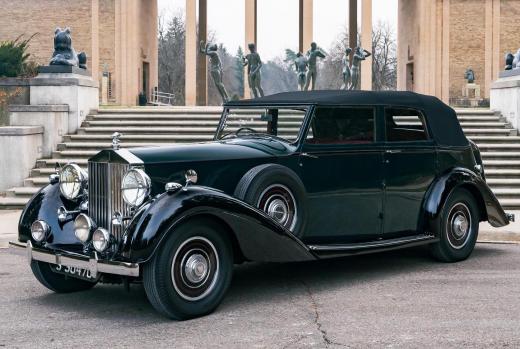 This Phantom III endured several remarkable journeys after leaving the possession of Peter Beatty. Staying in the family, the Rolls was purchased by Captain Michael Tree, the grandson of Ethels former Marriage to Arthur Tree, a member of Parliament. Just 8 months later, the Phantom would end up in South Africa after being purchased by Barlow Pye. 8 years after, the American Consulate General Clifford R. Nelson brought the vehicle north to Salisbury, Rhodesia. He was the man who likely transported this Rolls-Royce onto our shores. A man named Robert Wilke of Menlo Park California would next gain the distinction of owning this wonderful motorcar. Remarkably, the car was described to have been in original condition at the time of the cars application to the Phantom III technical society in 1974. After an unspecified amount of time, Robert Schaffner, a fellow California resident, would take possession of the car.

While some reconditioning was performed by Schaffner, it wasnt until a couple of years ago that 3 DL 118 received a full restoration. As previously mentioned, the exterior is finished in very much the same way it was delivered. The interior is now finished fully in red, with matching darker carpets. Completed to an exceptionally high standard, the motorcar presents incredibly well. The thick hides, Circassian Burr walnut trim, and chrome brightwork are all equally resplendent. To sit amongst this is to be transported back to a time. Details like the cut lenses on the rear passenger lights, the clock on the cowl, and the fine woodwork make one appreciate the craftsmanship behind such a vehicle. The exterior shows with equally incredible attention to detail. Both the glossy green paint and brightwork appear lustrous. The top is also freshly redone and will surely keep the weather from intruding while on the move. Mechanically, this Phantom III also bears the distinction of having been powered by its original motor, Z28E, from new. With immense power from its 7.3 Liter overhead-valve V12 and lighter weight coachwork, this highly engineered motorcar should have no issue keeping up with modern traffic and the exceptional quality of the restoration will surely make for a dependable touring companion.

With such a distinguished, well-documented chain of ownership, the Phantom III on offer makes for a true collectible. Its immensely attractive coachwork, and the rarity of its body style further increases its desirability and affirms its status in the Rolls-Royce community. Its exceptionally completed restoration and matching numbers engine confirm 3 DL118 as a must-have for anyone serious about owning a truly extraordinary Rolls-Royce Phantom III.

Note from the publisher:
Welcome to our collector car marketplace where we feature thousands of classified ad listings of vintage cars for sale. We hope that you will bookmark our site and visit often; our cars are updated every day. Furthermore we encourage you to subscribe to our mailing list so that we may periodically notify you of interesting classic cars that become available.
Home > Classic Cars For Sale > Rolls-Royce > Phantom III Cabriolet > 1939 Rolls-Royce Phantom III Cabriolet