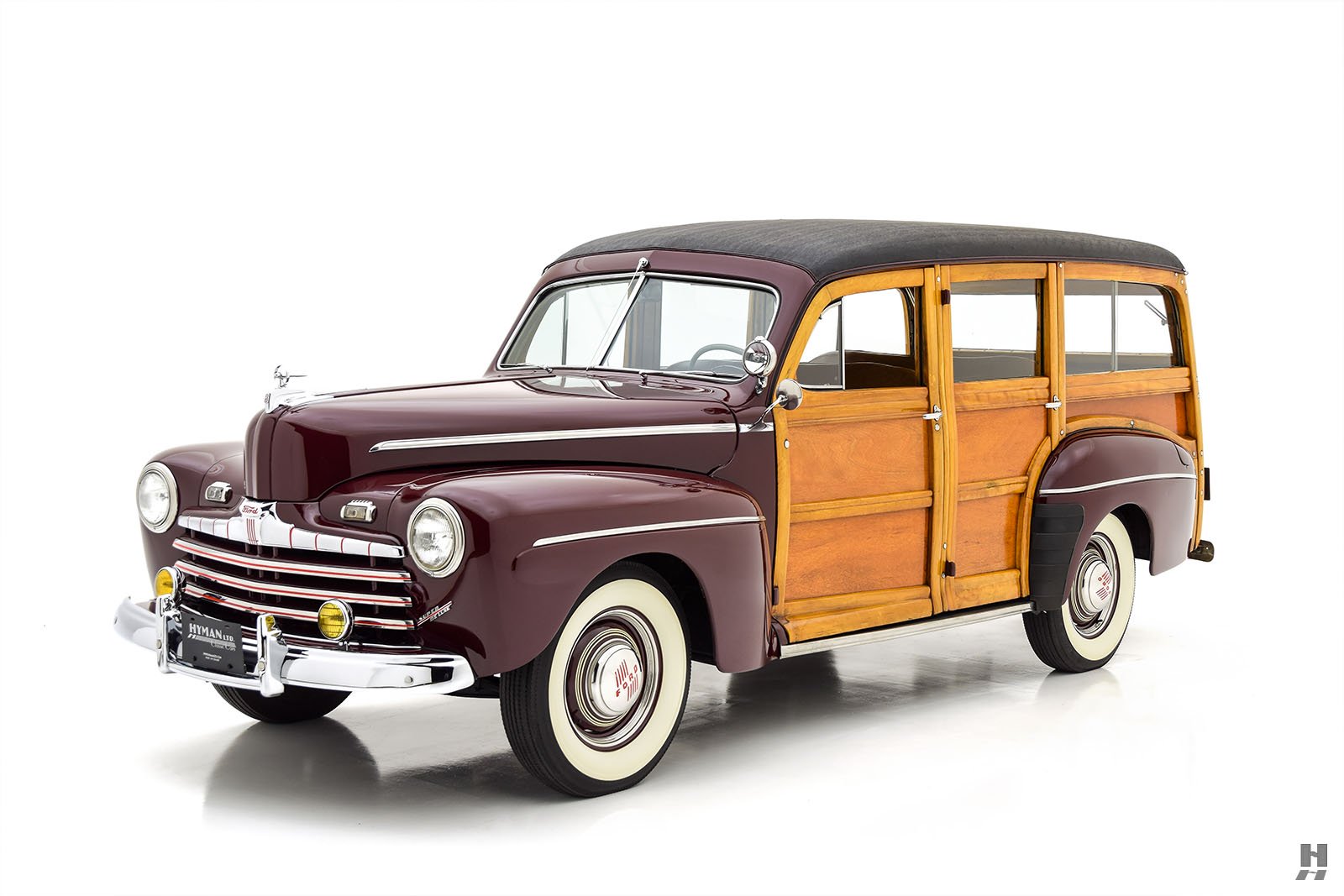 Price: USD $58,500
Late in the 1930s the American automobile industry emerged from the Great Depression with cautious optimism. Some believed a brave new era was on the horizon; one of aeronautical-inspired streamlining and exotic rear-engine layouts. However top auto executives were aware that America was perilously close to involvement in another brewing conflict in Europe. Ford echoed that sentiment for the new 1941 model year release. Taking a conservative approach designers wanted the new car to be long-lasting should production be interrupted for war. Officially released in 1941 the new Fords were robust with attractive contemporary styling by Eugene T. Bob Gregorie. Ford offered the cars in three distinct model lines Special Deluxe and Super Deluxe. For the first time since 1906 an inline-six was offered replacing the small displacement V8-60. However the vast majority of customers opted for the tried and tested 85 horsepower flathead V8. New sheet metal followed current trends with faired-in headlamps and a rounded yet upright look. 1942 Models got a new face with a lower broader grille that hinted at the future. Just as the auto industry was regaining its momentum America was thrust into war and automakers were forced to abandon civilian production to support the war effort.After the war Ford rushed to get showrooms filled. As a result 1946 cars represented little more than lightly refreshed versions of 1942 models. It took some time to retool and produce enough parts to resume full production and select models like the convertible and station wagon took even longer to reach showrooms. In addition to the cosmetic improvements 1946 Ford models finally received the hotter Mercury-spec 239-cubic inch flathead V8 rated at an even 100 horsepower. Buyers responded heartily and sales were quick to recover. Of the several models offered the Station Wagon has become one of the most iconic. Made famous in surf culture of the 1960s these Ford wagons provide a unique style with exceptional practicality. Equally at home on a farm country estate or in the city the beautifully-crafted wood-bodied Ford 69A is the quintessential American Woodie.A highly desirable model with a fascinating history this 1946 Ford 69A Super Deluxe Wagon once belonged to the famous CIA boss James J. Angleton who kept it at his beloved Brule Wisconsin fishing lodge for many years. Mr. Angleton was a former agent in the Office of Strategic Services who went on to a legendary career as one of the founding members of the CIA and is considered the father of American counterintelligence serving as the counterintelligence chief from 1954-1975. Originally from Boise Idaho Angleton was an avid fisherman and he used the car regularly on his vacation property no doubt hosting high-ranking officials and conducting secretive state business in his trusty Ford. It is believed that Angleton first acquired the Ford when he purchased the lodge from a CIA colleague. Following his death in 1987 the Wagon went to Angletons long-time lodge caretaker.The next owner acquired the Ford from the caretaker at a country auction and in approximately 2001 it first arrived at Hyman Ltd before passing to a good friend and client in Colorado. He was shocked when he uncovered the history of this humble Ford wagon as he formerly worked as an intelligence analyst in the Army working directly with Mr. Angletons offices in the 1970s. It seems he and the Ford wagon were destined for one another!In his hands the car was treated to a light restoration with great care taken to preserve as much of the original wood as possible. The sheet metal parts were given a high-quality respray in Maroon which has held up well over the years. Concurrently the chassis was overhauled and V8 engine rebuilt.It passed back through our showroom in 2010 only to return to our fold now for the third time still presenting in very attractive carefully preserved condition. The maroon paintwork has aged gracefully and shows well with a warm luster. Importantly subsequent owners have maintained the highly original wood in excellent condition. The exterior chrome and brightwork also present very well overall with just some minor polish marks and pitting found on some pieces. It retains its original Super Deluxe body trim as well as the fully enclosed color-keyed rear-mounted spare wheel. Rolling stock consists of factory-correct body color steel wheels adorned with beauty rings Ford-embossed hubcaps and wide-whitewall bias-ply tires.The interior is faithfully presented with factory-correct materials and finishes. Hard-wearing brown leatherette upholstery suits the rugged nature of the wagon while providing a pleasing complementary color to the maroon paint. Correct rubber floor mats carry on the robust utilitarian theme. Comfort isnt completely ignored however as this top of the line Super Deluxe features both a heater and an AM radio. Throughout the cabin the materials controls and fittings are in excellent condition.Fords legendary flatehead V8 engine is correctly detailed with the appropriate hardware hose clamps Ford script radiator plumbing and lacquered ignition wires. The engine and ancillaries are nicely finished and the presentation is honest unfussy and perfectly suitable for regular use. Recent specialist service ensures it runs and drives well with the engine delivering the smoothness and relaxed low-rpm nature expected of a flathead V8. Historically speaking the high-maintenance character of the wood body and popularity with surfers and hot rodders made for rather high attrition rates with these station wagons. Therefore it is incredibly rare to find such an unmolested example with so much of its original wood. Thanks to many years of attentive care this beautiful enjoyable and historically intriguing Ford survives in remarkable condition.For additional details please view this listing directly on our website https://hymanltd.com/vehicles/6399-1946-ford-super-deluxe-station-wagon/

Note from the publisher:
Welcome to our collector car marketplace where we feature thousands of classified ad listings of vintage cars for sale. We hope that you will bookmark our site and visit often; our cars are updated every day. Furthermore we encourage you to subscribe to our mailing list so that we may periodically notify you of interesting classic cars that become available.
Home > Classic Cars For Sale > Ford > Super DeLuxe > 1946 Ford Super DeLuxe