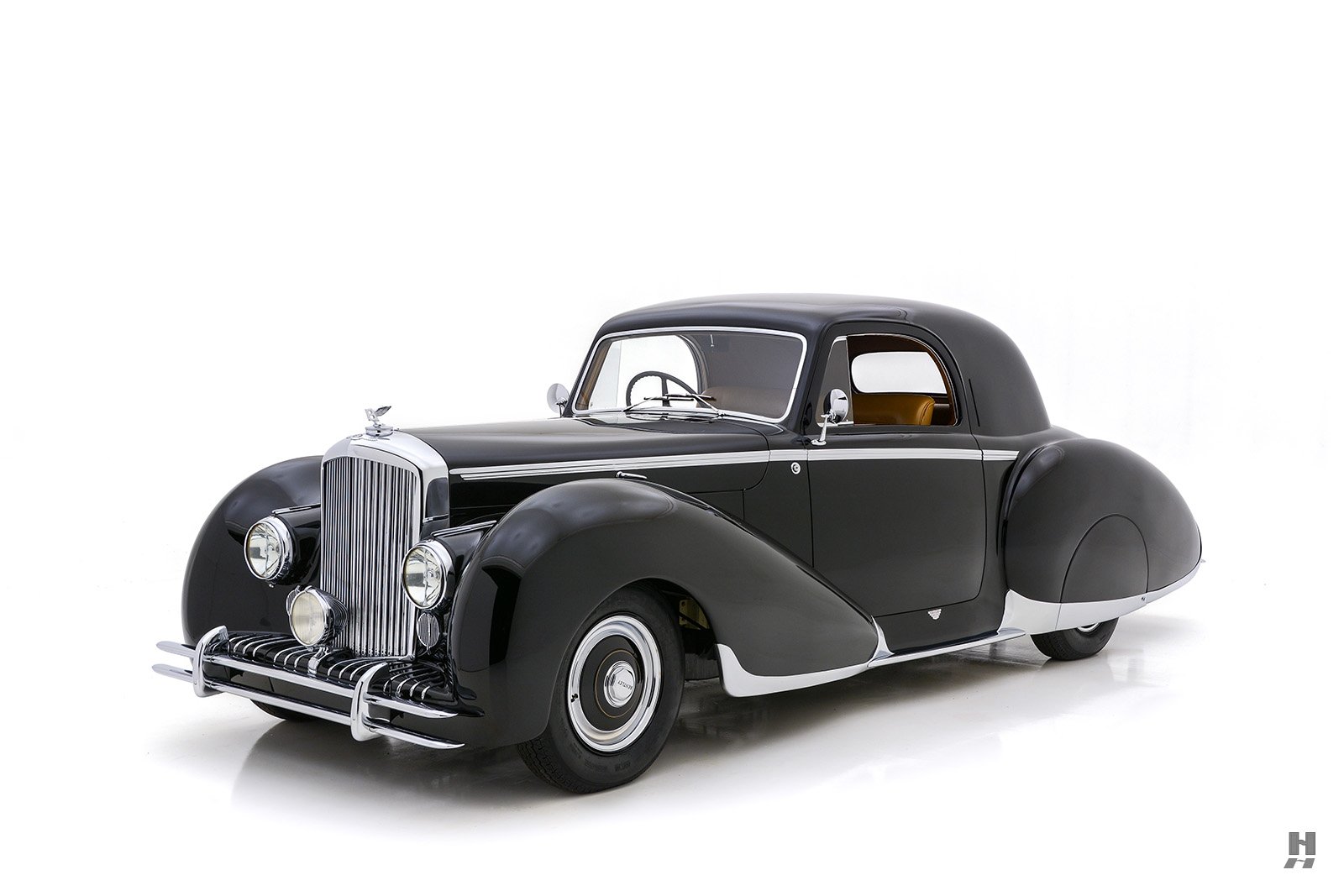 Price: USD $460,000
The arrival of the new Bentley Mk VI in 1947 marked several significant milestones for Bentley and its parent company Rolls-Royce. The Mk VI was their first new automobile since production halted to focus on the war effort in 1940 and it was also the first Rolls Royce/Bentley product produced in the revamped aero-engine factory in Crewe where most of the companys skilled workforce was concentrated during the war. The Mk VI was brand new from the ground up featuring a robust ladder chassis independent front suspension and a six-cylinder F-head engine with overhead inlet and side exhaust valves. One of the most significant developments was the arrival of the new Standard Steel Saloon coachwork built for Bentley by Pressed Steel Ltd. It was the first time in the history of the company that buyers could purchase complete and trimmed coachwork directly from the factory allowed for much faster deliveries and resulting in the Mk VI becoming the best-selling model to date with some 5201 examples produced in total.While the Standard Steel Saloon dominated the order books Bentley continued to offer the Mk VI as a chassis only for those clients who preferred the services of outside coachbuilders. Exactly 999 or approximately 20% of total production went to firms such as James Young Park Ward Freestone & Webb H.J. Mulliner many of whom had deep ties with Rolls-Royce and Bentley. However a small number of chassis found their way across the English Channel and into the hands of Europes most prestigious coachbuilders.Our featured car chassis number B9AJ is one of a handful of Mk VI cars to make the journey across the channel and it holds the distinction of being the only Bentley bodied from new by the renowned coachbuilder Figoni et Falaschi of Paris. Best known for their graceful windswept designs on Talbot-Lago Delahaye and Delage chassis Figoni et Falaschi is one of the most revered and respected coachbuilders of the period. The body maker was at the forefront of style applying the principals ofhaute coutureto the art of motorcar bodies. For the ultimate fashion statement during the height of the Concours dElegance craze Figoni et Falaschi worked directly with Parisian fashion designers to create clothing ensembles that complemented an automobiles lines and palette. The highest standards of craftsmanship complemented the impeccable style and it is estimated that a Figoni et Falaschi body took more than 2000 hours to produce.Factory records show that chassis B9AJ a very early A-series model was ordered by Mr. J. Rodrigues through Franco Britannic Automobiles of Paris. Build sheets indicate the order was for a rolling chassis for delivery to Figoni. Notes on order suggest the original intent was for a lightweight two-seat cabriolet with a large luggage boot and that it shall be equipped with a KM-calibrated speedometer and a radio for continental touring. Joseph Figonis son Claude Figoni later recalled that he personally took the order from Mr. Rodrigues and Claude remembered him as a tall and elegant gentleman with wonderful manners. He certainly had exquisite taste as evident the gorgeous Bentley he specified.As construction of the coachwork got underway Mr. Rodrigues changed his plan for an open two-seater. The car was to serve as his primary transport between his homes in Paris and Monaco so it needed to be comfortable rapid and have plenty of luggage capacity. Working closely with his customer Figoni created this elegant coupe (body number 1016) which proved more practical for Grand Touring. Perhaps due to the running design changes as much as the time required to meticulously craft the coachwork B9AJ was not delivered to Mr. Rodrigues until July 1948.The neat coupe body is uniquely elegant and purposeful with gracefully swept front wings skirted rear fenders and large blind quarters on the roof. The iconic radiator shell is neatly integrated and flanked by low-mounted Lucas headlamps with a central Lucas driving lamp. It is unmistakable as a Bentley yet it displays a distinctly French flair. The boot is well-proportioned while also being large enough to meet the owners requirement that it accommodate 50-70 kilograms of luggage. The twin blade bumpers and chrome sweeps on the lower fenders and beltline are signature Figoni touches that add a final flourish to the elegant lines. We can only imagine the impression this fabulous Bentley must have made effortlessly carrying its occupant along the Cte dAzur on the way to Monaco for a weekend of relaxation.It is unclear how long Mr. Rodrigues owned it but chassis card shows that by 1964 B9AJ came to the United States. It first spent time in California with three owners before joining the collection of well-known enthusiast Eugene Beardslee of Long Island New York in the 1980s. He commissioned his favored shop Hibernia Restorations to refurbish the car. In 1990 Gene was invited to bring B9AJ to the Pebble Beach Concours dElegance where it earned a much-deserved First Place award in a highly competitive class for Post War European Custom Coachwork.In approximately 2012 the Bentley was stripped and refinished to a high standard in its current and correct black livery. After Mr. Beardslees passing it was purchased by a private collector who commissioned a light freshening of the restoration. The four-place cabin features luxurious tan leather upholstery and gorgeous highly polished woodwork. The engine bay is finely detailed with black enamel accessories and the correct tan engine bay paint. Recently the faux landau irons previously fitted to the roof were removed and the wheels fitted with new black wall Avon tires to return the car to its proper original specification as seen in period photographs.As the only Bentley to feature the work of the great Figoni et Falaschi from new this beautiful MkVI would be a welcome participant in the worlds most exclusive motoring events and concours and it will undoubtedly provide its next caretaker with many years of motoring delight from behind the wheel.Offers welcome and trades consideredFor additional details please view this listing directly on our website https://hymanltd.com/vehicles/6717-1947-bentley-mkvi-figoni-et-falaschi-coupe/

Note from the publisher:
Welcome to our collector car marketplace where we feature thousands of classified ad listings of vintage cars for sale. We hope that you will bookmark our site and visit often; our cars are updated every day. Furthermore we encourage you to subscribe to our mailing list so that we may periodically notify you of interesting classic cars that become available.
Home > Classic Cars For Sale > Bentley > MKVI Figoni Et Falaschi > 1947 Bentley MKVI Figoni Et Falaschi