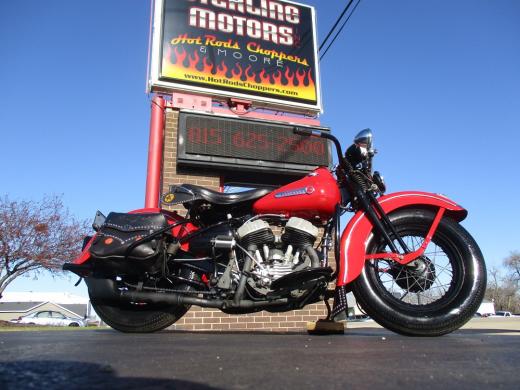 Price: USD $26,900
Mileage: 63
In 1929 Harley-Davidson expanded its model line with a mid-sized motorcycle to provide an entry level model for beginning riders as well as a suitable basis for dirt track racing. It was powered by a newly designed 45 inch V-twin engine with a side-valve cylinder head (flathead) configuration simply referred to as the Forty-Five. During World War II Harley-Davidson produced over 88,000 Forty-Fives for serviceman because of their simplicity, reliability and durability. These machines introduced motorcycling to thousands of servicemen who became loyal customers after the war. Easily tuned and responsive to modifications, 45 powered Harley-Davidsons also dominated flat track racing during the late 1940s through the early 1950s. By 1947 the Forty-Five was available in the handsome and highly developed WL model. Solo variants remained in production through 1952. This particular example is believed to be a 3 owner bike that the current owner bought from the 2nd owner in 1961. In 2009 the current owner began restoring it with the help of a friend who is a member of the Antique Motorcycle Club of America (AMCA). During the restoration it was gone through top to bottom and the odometer was reset to zero. It was entered into AMCAs Chief Blackhawk Meet in Davenport, IA on 09/04/11 during which time it received 98 out of 100 total possible points which earned it an AMCA Junior 1st Award. The score sheet and plaque are included as shown. If you have been looking for a correctly restored WL you will be hard pressed to find an original one in this shape for what we are asking so if you like what you see you better not wait to call as it might be too late!

Back To Top
Classic car for sale by
Sterling Motors Inc

Note from the publisher:
Welcome to our collector car marketplace where we feature thousands of classified ad listings of vintage cars for sale. We hope that you will bookmark our site and visit often; our cars are updated every day. Furthermore we encourage you to subscribe to our mailing list so that we may periodically notify you of interesting classic cars that become available.
Home > Classic Cars For Sale > Harley-Davidson > MOTORCYCLE > 1947 Harley-Davidson MOTORCYCLE