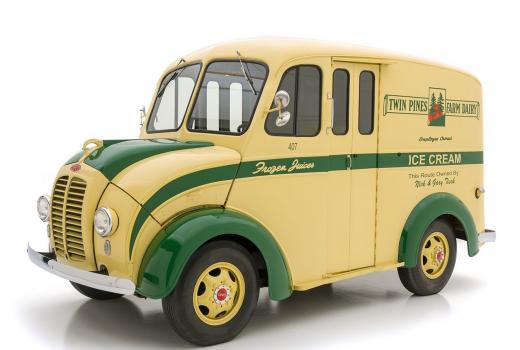 The Detroit Industrial Vehicle Company was born in the mid-1920s when engineer George Bacon then working for the Detroit Electric Vehicle Company came up with an idea for a milk truck that could be driven from multiple positions allowing drivers to more quickly hop on/off the vehicle for more efficient deliveries. But electric technology was not yet up to the rigors of hauling heavy loads for a full days shift especially in the cold winters of Detroit and Bacons bosses rejected the idea of a gasoline-powered vehicle so he set out on his own to found DIVCO which began production in 1926.The Divco company went through multiple iterations and partnerships no fewer than eight in sixty years. Various designs for the multi-stop vehicle were tried though the Snub-Nose Model U of 1937 became the companys mainstay for the remainder of its existence. The Model U was purpose-built for the abuses of stop-start deliveries and needed to be robust and maneuverable with the ability to carry heavy payloads of milk newspapers or the like. The distinct sloping nose afforded excellent visibility and Divco trucks were built to be driven while standing up with easy accessibility to grab and go. An ingenious combination clutch/safety brake allowed the driver to leave the vehicle running and in gear hop out to make his delivery then release the brake for a quick smooth departure to his next stop. Divco made many refinements through production but the fundamental design of the Model U remained unchanged from 1937 until the last trucks left the works in 1986.This fabulous 1948 Divco Model UM is a wonderfully restored example of Americas most beloved milk truck. Between 2005 and 2008 it was restored by brothers Nick and Gary Tisch in honor of their father. Nicholas Tisch Sr. was a milkman for Twin Pines Farm Dairy of Warren Michigan from 1959 to 1973. The Tisch boys fondly recalled riding along with their dad and being put to work whenever they had days off from school often dashing into customers homes to put milk directly in the fridge! Recreating his milk truck seemed like the perfect way to honor his life and unwavering work ethic.Once the Tisch brothers found a suitable donor to restore they set about recreating their fathers Divco as accurately as possible. The ensuing project consumed more than 3000 hours and while Nick restored the truck Gary scoured antique malls flea markets and tag sales for original Twin Pines memorabilia and merchandise to complete the display. Sadly their father passed before they finished the project but the restoration continued as a fitting tribute to their hard-working dad. Nick completed the truck in August 2008 just in time to debut it at the Woodward Dream Cruise where the locals gave it a warm reception. It later won its class at the famous Detroit Autorama. Nick and Gary sold the Divco to a collector in 2011 and it has been in the care of that same fastidious owner ever since.Wonderfully presented in the authentic Twin Pines livery of green and cream the Divco is superbly detailed inside and out. The paintwork is excellent with beautiful accurately reproduced lettering. The truck rides on the correct-type heavy-duty wheels with period-style Firestone tires. Inside a uniform light gray finish covers all metal surfaces which helped keep it cool inside and provided a durable finish that was easy to touch up over years of service. A highlight of this restoration is the incredible assemblage of genuine Twin Pines Dairy products filling the cargo hold. There are also original period delivery ledgers service manuals and more on file.While the fundamental design of the Model U barely changed in 50 years many different engines were used depending on the era. Continental Hercules Nash Detroit-Diesel and Ford all supplied engines to Divco. Most early trucks including this one used Continentals robust and efficient L-head four-cylinder engines. The engine is paired with a four-speed manual transmission with an ultra-low 1st gear. The Continental was no powerhouse but it could push the Model U to 40 mph depending on payload.Divcos heyday was in the 1950s as vibrant city neighborhoods made for easy home delivery. But as neighborhoods sprawled further from city centers and supermarkets took shape small dairies couldnt keep up and Divco sales slowed. The last Snub-Nose Divco left the factory in 1986 yet the distinctive trucks bring a warm sense of nostalgia to millions of Americans. That nostalgia brought two brothers to honor their father with this magnificent eminently charming vehicle which is sure to stand out in any collection.Offers welcome and trades consideredFor additional details please view this listing directly on our website https://hymanltd.com/vehicles/7164-1948-divco-model-um-milk-truck/

This 1948 Divco Model UM was listed for sale on 1-19-22 11:01:23. The vehicle color is not available and VIN is not available . Kindly check ad for seller's location. Seller`s stock ID is hyman7164. There are other Divco cars currently listed for sale on our website. You may desire to see what other Divco cars are selling for by visiting our Sales Data page.