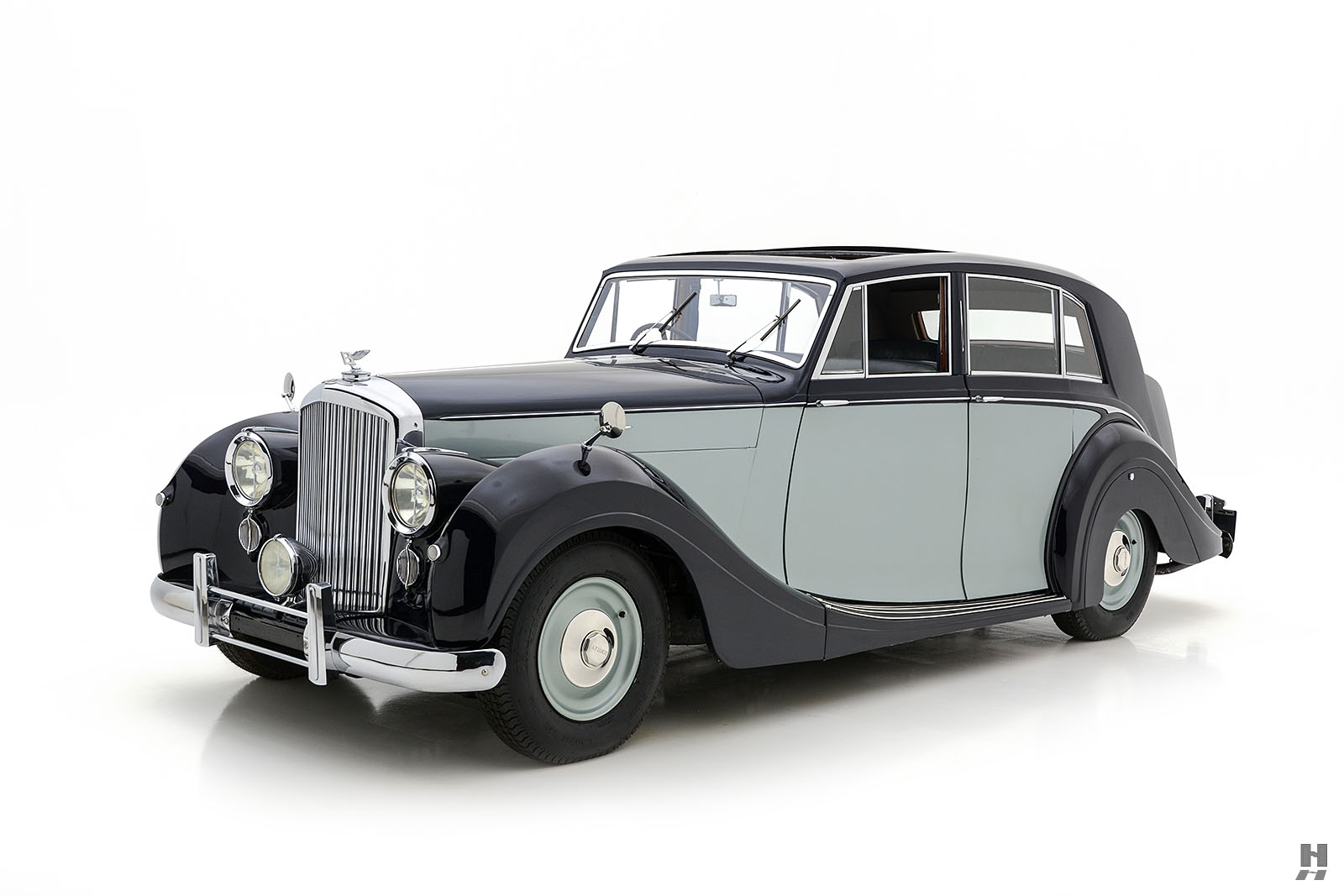 Price: USD $41,500
With the world still rebuilding in the aftermath of World War II Rolls-Royce and Bentley faced the decision of whether or not to return to the business of producing motorcars. Automobile production stopped in 1940 leaving the aero-engine division to sustain the company throughout the war. Today it is difficult to believe that Rolls-Royces managers would consider abandoning the automobile business but thankfully a small contingent within the company fought to keep cars at the forefront. During World War II the aero division housed most of the workforce and machinery so once motorcar production was back on managers moved the line from the traditional home in Derby to the newer better-equipped factory in Crewe. The switch allowed for higher production volume and a greater quantity of precision machined parts to aid in standardizing the line which Rolls-Royce saw as a necessary step toward long-term survival. Interestingly the first product to roll out of the new works in 1946 was not a Rolls-Royce but rather a Bentley the all-new Mark VI.The new model marked a significant milestone for these legendary British marques. The Bentley Mark VI (joined by the twin Rolls-Royce Silver Dawn in 1949) was not only the first postwar production RR/Bentley product but it was the very first model offered by either company as a complete car with factory-built coachwork. The all-steel production body was officially designated theStandard Steel Saloon. Pressed Steel Ltd. produced the panels and the vehicles were then assembled and trimmed in Crewe. Mechanically the Mark VI shared a good deal in common with the aborted pre-war Mark V including independent front suspension on a sturdy chassis and a refined 4.25-litre inline-six.Despite the move toward standardization the art of coachbuilding was far from dead. Engineers designed the Mk VI chassis to be coachbuilder-ready and numerous independent firms took full advantage of the versatile platform. Traditional English coachbuilders such as James Young H.J. Mulliner Hooper and Park Ward developed a wide array of body styles that ranged from conservative to extravagant. Freestone & Webb who specialized in Rolls-Royce and Bentley coachwork for their entire existence also enjoyed steady business with Mark VI customers. In the years before WWII they gained notoriety for their exquisite quality and stylish razor-edge Top Hat saloon bodies. As regular exhibitors at the London Motor Show Freestone & Webb were awarded the Gold Medal for Private Coachbuilders an incredible nine times in a row. The firm produced a total of 67 bodies for the Mark VI spanning twenty different styles the majority of which were variations on their preferred closed saloon designs.Chassis number B133 EW features handsome four-door saloon coachwork by Freestone & Webb. Records show this car first belonged to H. Lotery who reportedly purchased several chassis from Crewe and usually favored Freestone & Webb coachwork. For his Mk VI he ordered design 3046/C: A crisp and elegant four-door with flowing wing lines and hints of Freestones signature razors edge detailing. A popular style by the standards of Freestone & Webb they built a total of 18 cars to this design. Beyond the first owners identity little else of the early history is known though the Schoellkopf Card shows it belonged to Mr. Donald Feldman of New York City in the mid-1970s. He brought the car to the United States after what he described as considerable rebuilding in the UK. An active club member Mr. Feldman participated in RREC and BDC events throughout his 35-plus year tenure with the Bentley. By 2011 Mr. Feldman had moved to Montana and he listed the car for sale in club publications. The most recent owners purchased the car from him and cared for it for the past nine years.Today B133 EW presents in good condition overall with a moderate patina earned through years of care and enjoyment. The two-tone blue livery suits the design quite well and it presents with an honest character that suits the cars drivable nature. The paintwork is in good order with a consistent gloss and finish quality. A few touchups and blemishes reflect the age of the paint but the car is quite attractive and presentable overall. Brightwork is in similar condition with a few thin spots in the plating that dont detract from the otherwise charming presentation. Features of the coachwork include a sunroof central-mounted driving lamp and bumper overriders.The cabin features light blue leather with complementing dark blue piping and carpets accented by richly-finished wood trim. The hides display a rich character earned through years of enjoyment. Some moderate wear and creasing are noted on the front seats along with shrinking on the door cards. While it does show its age the honest careworn interior has a particular appeal for driving enthusiasts. As with all Mk VI chassis this car features the signature layout of right-drive with the right-hand gearlever for the 4-speed manual gearbox. Switchgear is in good order and the original Radiomobile radio sits below the dash. The interior woodwork is quite attractive presenting in good order all around and the sale includes the original tool kit and owners handbook.The factory build sheets confirm this car retains its original numbers-matching 4 -litre inline-six which runs well. The authentic presentation includes dual SU carburetors air cleaner and valve cover all in black enamel finish and correct-type plumbing and electrical fittings. The undercarriage and chassis appear honest and tidy reflecting the cars years of on-road enjoyment and maintenance.With its beautiful coachbuilt body and robust underpinnings this Mk VI would be an excellent basis for a cosmetic freshening yet it is also perfectly suited to enjoy as-is. Bentleys of this era are renowned for their impressive performance and high levels of refinement making them ideal for enthusiastic touring. Well-loved and maintained B133 EW has the potential to be an enjoyable selection for BDC or RROC tours and gatherings.Offers welcome and trades consideredFor additional details please view this listing directly on our website https://hymanltd.com/vehicles/6594-1949-bentley-mkvi-freestone-webb-saloon/

This 1949 Bentley MKVI was listed for sale on 1-7-20 07:58:36. The vehicle color is not available and VIN is B133EW . Kindly check ad for seller's location. Seller`s stock ID is hyman6594. There are other Bentley cars currently listed for sale on our website. You may desire to see what other Bentley cars are selling for by visiting our Sales Data page.

Note from the publisher:
Welcome to our collector car marketplace where we feature thousands of classified ad listings of vintage cars for sale. We hope that you will bookmark our site and visit often; our cars are updated every day. Furthermore we encourage you to subscribe to our mailing list so that we may periodically notify you of interesting classic cars that become available.
Home > Classic Cars For Sale > Bentley > MKVI > 1949 Bentley MKVI