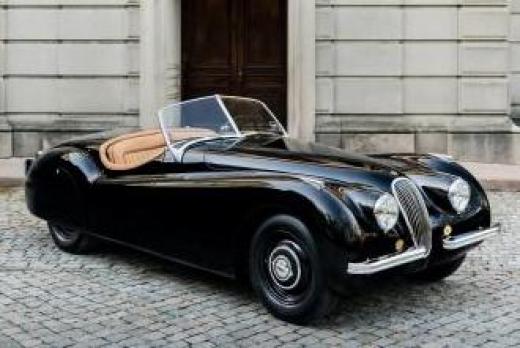 The history of restoration for the automobile has seen nearly a century of evolution. Just like that of the automobile itself, the process of automotive restoration has seen technological advancement, fundamental paradigms shifts on how to look at the process, why to restore, what to restore, and how to do it. On a macro-level, automotive restoration has brought cars back from the dead. On a micro level, it has evolved existing technologies for other fields of use. All in all, it remains the centerpiece of the automotive hobby, the activity that drives an industry, and the reason we have the Concours DElegance showcasing restorations of various marques.

The Jaguar XK120 is a pivotal moment in time for the British automaker. With so much riding on both the design and mechanical aspects, it was inevitably a success. One that would evolve into the great cars of the 1950s and 1960s, both on the road and the track. With 12,055 made in 6 years, it was undoubtedly a success. This means that many also were subjected to neglect with the launch of newer cars from Jaguar and others. Cars found there second, third and/or final owners. The loss of a fuel pump, or a minor issue caused them to sit, languish and lend themselves to a their future potential as a barn-find. Thus, it is fair to say that the XK120 is the perfect case study for an important but common car that remains a popular car to restore amongst enthusiasts.

This brings us to our subject example, a matching numbers 1950 Jaguar XK120 Roadster, Chassis # 670499. The 499th LHD XK120 produced and an early steel bodied example possessing all of the correct, early and desirable features only found on the early cars. To say that the car is nicely restored with an emphasis on correctness would be an understatement. This example showcases a quality of workmanship, dedication and research induced execution equivalent to a PHD students Dissertation at an Ivy League University. Comprehensive, precise, filled with purposeful reasoning, and documented in a fashion we have never seen before in a restoration; both on paper and in the finished product.

Starting from the beginning, the JDHT Certificate indicates that this particular XK120 is a US specification example delivered to its selling dealer by distributor Max Hoffman of New York. Unfortunately, the first owner was not recorded and early verbal history only dates back to the late 1970s when a Mr. Odell of Delaware acquired it. Mr. Odell owned the car until 1987 when its most recent owner acquired it, located in Maryland. There the car lay dormant, indoors, awaiting a restoration until 2011. The owner, a chemical engineer by trade, and a craftsman with a special eye for detail was a long-time hobbyist and restorer of many marques. Always taking every restoration to the furthest degree, winning every award applicable, and always striving for perfection in every aspect of the job. However, it was never over restoration that was the goal, it was to achieve a quality of restoration reflective of the car when it was finished new in period. Thus, many hours of research was compiled, interviews conducted, and theories validated or dismissed to make sure each component and the entire effort was done accurately.

The comprehensiveness of the restoration has been captured in a detailed restoration summary that can be found in the View Documents tab or we will be glad to e-mail a copy at the request of any interested party. It details area by area the criteria for correctness, describing/translating individual stampings and numbers. Observing different materials and methods of construction- why they are correct and when, as well as why they were changed during the variations in the production run. The academically oriented nature of this examples documented restoration cannot be overstated. It is a true joy to read for anyone enthusiastic about what separates a restored car from a 100-point JCNA Concours winning masterpiece.

Further, as a AACA and JCNA Judge at the highest level, the restorer had insights on how to make sure he would win, produce a 100-point-car, and carry a pride of ownership for owning the best of the best. Thus the car was also shown multiple times winning at the highest levels of competition. In the AACA Grand National and Grand National division, it took home awards as well as a JCNA National award, with multiple 100 Point scores. Again, all chronologically documented via a PDF in the View Documents tab.

Best in both specification and its long list of accolades, this early XK120 presents an opportunity to acquire a certified 100-point example that has achieved what few cars will. Perfect as an investment opportunity, and even better as the centerpiece of any serious collection focused on Concours winning quality.

Note from the publisher:
Welcome to our collector car marketplace where we feature thousands of classified ad listings of vintage cars for sale. We hope that you will bookmark our site and visit often; our cars are updated every day. Furthermore we encourage you to subscribe to our mailing list so that we may periodically notify you of interesting classic cars that become available.
Home > Classic Cars For Sale > Jaguar > XK 120 > 1950 Jaguar XK 120