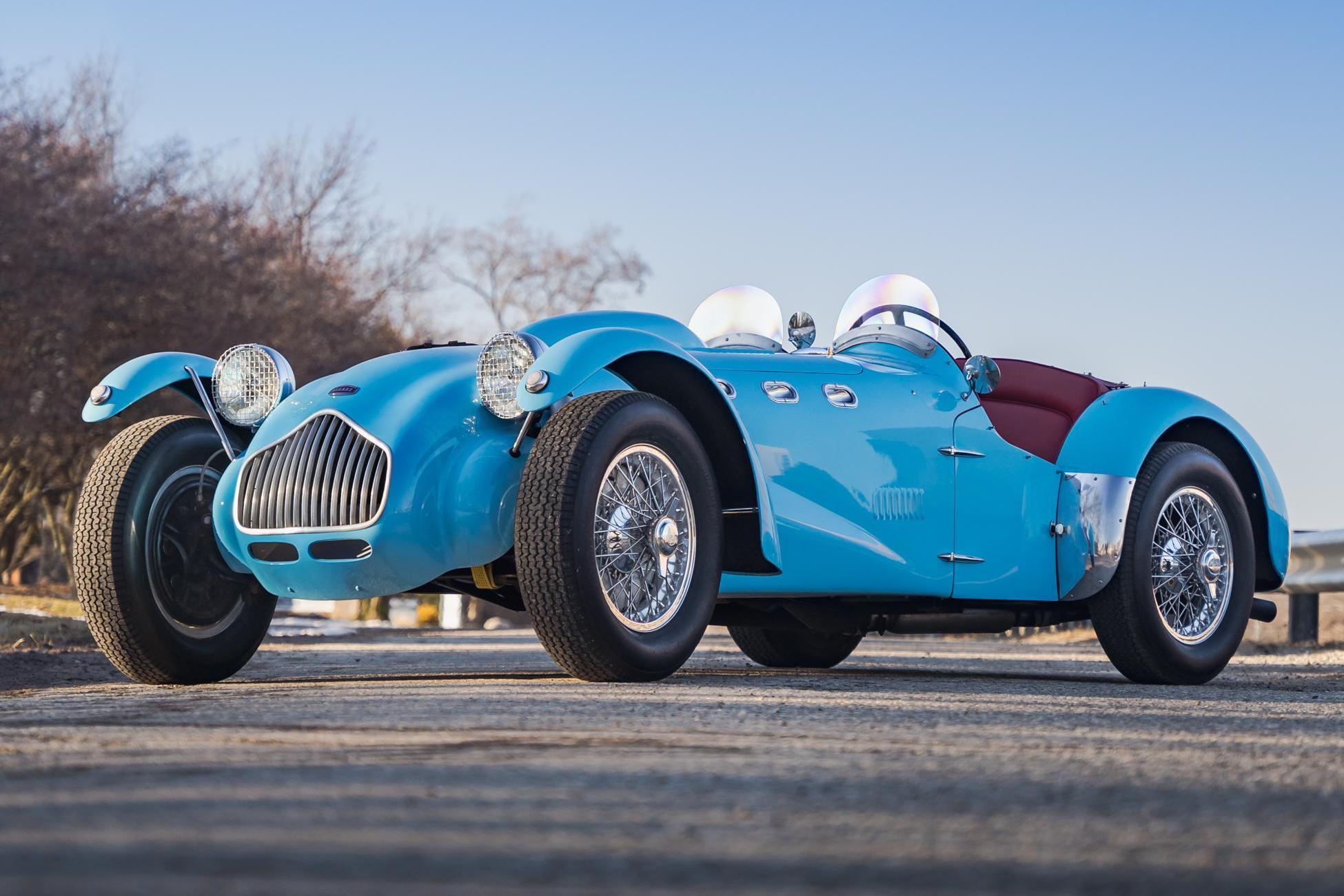 The Allard Motor Company was founded in 1945 by Sydney Allard, the son of a British Ford dealer with an innate love for cars and speed. Allard arrived on the scene with the J2 Roadster, a nimble sports car built for American V8 engines with a reputation for wild handling. The chassis featured a de Dion rear axle, large Alfin drum brakes, and a revised version of Allards signature split front axle, designed by Les Bellamy. The cars were shipped without an engine, and kits were provided for the owners to install any V8 they wished. Cadillacs 331 cubic-inch overhead-valve V8 proved to be the most popular choice and it made the Allard J2 a daunting opponent for Jaguars, Cunninghams, and Ferraris in early SCCA events. The J2 even saw success at Le Mans in 1950, with a third-place overall when it was driven by Tom Cole and Sydney Allard himself. The car was powered by the classic Cadillac V8 and hit an average of 87.74 mph (141.20 km/h). These Cad-Allards, as they came to be called, were a force to be reckoned with and the Allard quickly became an icon in the early days of American motorsports.

This specific example, Chassis. No. 99J-2123, has a plethora of historic documentation and photos verifying the vehicles racing pedigree as well as ownership history dating back to its original owner, Del Lee of Grosse Point, Michigan. Mr. Lee ordered the Allard on the 7th of June, 1951, with a left-hand drive configuration, knock-off wire wheels, left-hand spare wheel, twin electric fuel pumps, Lucas headlamps with stone guards, and fittings to receive a Cadillac engine at the owners discretion. The wire wheels, left-hand spare wheel, and headlamps were identical to the specifications of Sydney Allards car driven in the 1950 Le Mans. The records also show that Mr. Lee requested a red interior and supplied a sample of a special metallic blue paint for the body.

Mr. Lee took delivery of the Allard on August 31, 1951, via Wood Motors of Detroit. Upon receiving the car, he entrusted Cal Connell of Detroit Racing Equipment to install the race-prepped Cadillac engine in the car. Throughout his ownership of the car, he participated in numerous races including the Bridgehampton Sports Car Road Race, Thompson Speedway, the Watkins Glen Grand Prix, and the SCCA Lake Orion ice race where he spun out while trying to avoid a hay bale. His great success in his Allard came during the 1953 Giants Despair Hill Climb in Wilkes-Barre, Pennsylvania where he took first in Class B and the Hollenback Trophy for Fast Time of the Day.

Mr. Lee parted with the car in 1954 and sold it to Fred Lavel, a boutique owner from Birmingham, Michigan. That same year, the new owner had Mr. Lee drive the Allard at the 1954 Watkins Glen race before taking it home with him. 1955 marked the cars first appearance at the Bonneville Speed Trials, where Mr. Lavels modifications netted him a 127 MPH top speed.

Mr. Lavel then replaced the stock alloy body with a Sorrell fiberglass body and the Cadillac engine with a Hemi out of a DeSoto Adventurer thanks to Virgil Exner, the Director of Styling at Chrysler. The modifications helped the Allard go even faster, this time achieving a top speed of 150.75. Mechanical issues prevented Mr. Lavel from making a third Bonneville appearance in the Allard and after refitting the stock alloy body on the car, he sold it to John Whitlock.

The car saw little action in Mr. Whitlocks possession and he later sold it to Robert Vandepaer of Jersey City, New Jersey on August 17th, 1968. At some point, the Allard received its third engine, a 56 Corvette small-block V8 with a Jaguar Moss four-speed manual transmission backing it up. Mr. Vandepaer carefully stored the car in his garage for 35 years, with the body separate from the chassis, until the diamond-in-the-rough was found by John Aibel in 1993. Mr. Aibel embarked on an extensive restoration of the Allard, with the goal of returning it to period-correct specifications. He installed a race-ready 1959 Cadillac 390 V8 engine, Jaguar drum brakes, an exceedingly rare factory soft top, and a windscreen to complete the look. The elegant red leather upholstery was returned to its original glory, the original tachometer was converted to a reliable electronic mechanism, the Borrani wire wheels were restored to match the old photos, and the body was painted in a striking 1970 AMC blue color similar to Mr. Lees special metallic blue paint. Upgrades to the car include a Muncie M21 gearbox, triple Strombergs, aluminum Weiand manifold, and polished Offenhauser valve covers for ultimate period-correct racing performance.

Like many of the previous owners, Mr. Aibel continued the Allards extensive racing pedigree in numerous VSCCA events on the East Coast, including the Fairmount Vintage Grand Prix, Pocono Vintage GP, Lime Rock Fall Festival, and two Allard reunion events at Pocono and Watkins Glen in the late 1990s. Though it was restored a number of years ago, this example presents excellently with only minor signs of aging and use.

Upon purchasing the vehicle, the owner will receive multiple spares including a Halibrand Quick Change. Accompanying the spares will be the vehicles extensive history file, complete with period photos, documents, VSCCA Log Book, and magazine clips showing the car in its full racing outfit. This is an incredible opportunity to own a well-documented icon of early American sports car racing that has been lovingly restored to period-correct specifications and is ready to tear the track again with nostalgic glory.

Note from the publisher:
Welcome to our collector car marketplace where we feature thousands of classified ad listings of vintage cars for sale. We hope that you will bookmark our site and visit often; our cars are updated every day. Furthermore we encourage you to subscribe to our mailing list so that we may periodically notify you of interesting classic cars that become available.
Home > Classic Cars For Sale > Allard > J2 > 1951 Allard J2