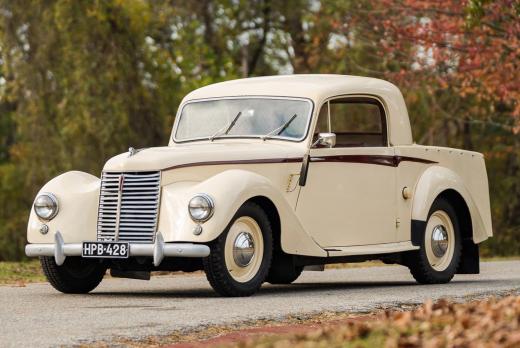 Before the outbreak of World War II, Armstrong Siddeley was known for the production of both luxury vehicles as well as aircraft engines. Once hostilities drew to a close though, they wasted no time getting back to civilian production. They introduced their first two postwar models, the Lancaster saloon and the Hurricane drophead-coupe, the same week the war in Europe was officially ended. In 1949 they went on to introduce two more commercially tailored offerings, the Utility Coupe and the Station Coupe. While the Utility Coupe was a traditional coupe utility vehicle, the Station Coupe featured two rows of seats to allow 4 people to ride in the cab and still have the ability to perform chores utilizing the ample bed in the rear. Both cars were derivatives of the Whitley 18 which was powered by a 2,309 cc Straight-6 engine mated to the choice of a 4-speed synchromesh gearbox or a rarely fitted pre-selector gearbox. Other forward-thinking features include an under-slung chassis frame, independent front suspension as well as hydraulically operated front drum brakes. Approximately 1,002 of these Station Coupes were produced with near 60 percent of these going to Australia. Today these Station Coupes have the honor of being one of the first two-seater utility vehicles, the ancestors to today's modern extended cab pickup trucks.

The example on offer here, chassis number SM1812295, body number SC14046, and engine number E1812321, is a rare 1951 Armstrong Siddeley Station Coupe. It is finished in the same off-white with red accents that many of these cars wear from the factory. Not much is known regarding the history of this car, but it is believed to have been restored around 30 years ago and has held up well since then. It currently is in nice driver quality condition with charming patina scattered throughout. It was purchased from the Netherlands and imported to the US by its current owner in 2018. As it sits today, this is a solid driver quality example. As a whole, it could use a little maintenance here and there to bring it up to excellent running and driving condition but it does start, run, and drive reasonably well. Given its rarity in the United States, this is an excellent opportunity to acquire a very interesting and friendly take on a postwar utility vehicle.

Included with the sale of this vehicle are the spare (with no tire) and the rear tonneau cover.

Note from the publisher:
Welcome to our collector car marketplace where we feature thousands of classified ad listings of vintage cars for sale. We hope that you will bookmark our site and visit often; our cars are updated every day. Furthermore we encourage you to subscribe to our mailing list so that we may periodically notify you of interesting classic cars that become available.
Home > Classic Cars For Sale > Armstrong Siddeley > Station Coupe > 1951 Armstrong Siddeley Station Coupe