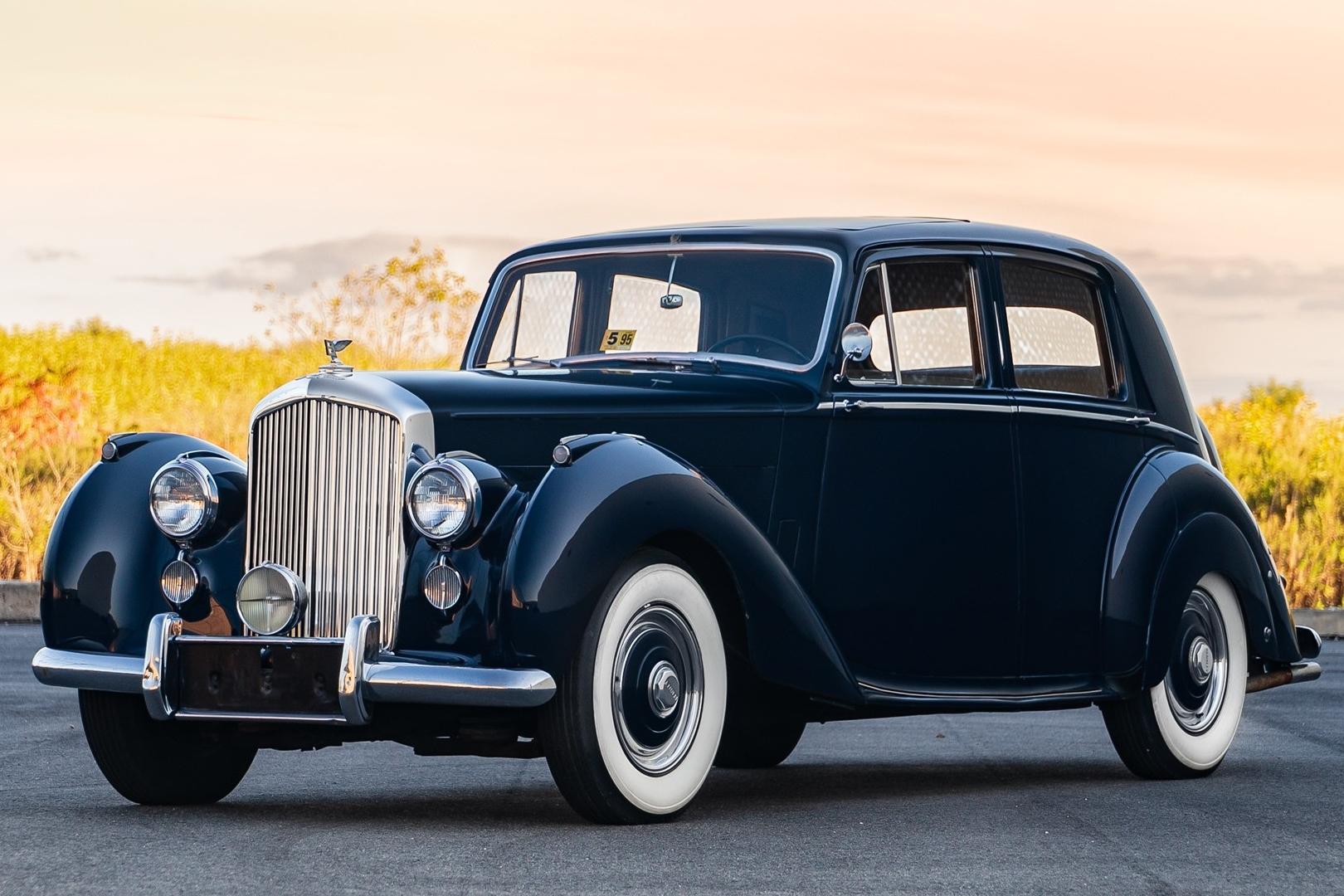 As the dark period of WWII drew to a close, auto manufacturers rushed to get back to normal production in order to meet the needs of the tired masses for civilian transportation. For Bentley the solution to speed was to produce a car that borrowed heavily in both styling and mechanicals from its prewar counterpart, the MK V. This model would be known, logically, as the MKIV under the Bentley moniker and later on in 1949 the Silver Dawn under the Rolls-Royce name. The MK VI was a very important car for a number of reasons. It was Bentley's first post-war luxury offering but the standard sedan version was also their first offering finished in all-steel coachwork as well as the first car to be built entirely in house, including the body, which up until the outbreak of war they had entirely farmed out. Power came from a 4.3-liter F-head straight-six engine, which was upgraded to a 4.6 liter in 1951. Power numbers were never officially released by Bentley, but in typical English form, it was said by the manufacturer to be adequate. Transmission options were scant, with a 4-seed synchromesh manual gearbox being the only option available for all MK VI cars. Although the standard in-house body was the steel saloon, other options included a 2-door saloon and a 2-door dropped coupe, both of which were made by Pressed Steel Ltd and then sent to the new Bentley factory at Crewe where they were finished. Bare chassis were still offered for the adventurous or more refined buyer and were finished by firms such as Graber, Figoni and Falaschi, and even Franay. In 1952 Bentley and Roll-Royce modified the standard steel bodies with a drastically larger trunk area and the resulting Bentley was now titled the Bentley R type. The R type would maintain production through 1955 before it was replaced by the heavily restyled S1.

The example on offer here, chassis number B107LMB and engine number B335M, is a 1951 Bentley MK VI Saloon. It is extremely rare in that is a left-hand drive example, of which not many were produced. This MK VI is currently finished in what is believed to be the original colors of a delightful Blue over Light Tan leather interior. It is an older restoration that has held up well and displays some excellent patina throughout the car. According to photos provided with the car, the restoration was carried out on the car in 1982. The car was taken down to bare metal and given a full respray, interior, as well as a mechanical rebuild. The car was owned by a gentleman in Virginia throughout the 1990s and into the early 2000s when it was sold to the current owner who lives in the Washington, DC area. Under the current owner's custodianship, the car has been maintained well, driven under favorable conditions, and stored properly. Most recently the car was looked over by a Bentley dealership where the carbs were rebuilt and the fuel system was serviced. As it sits today, this car is ready to be enjoyed on a sunny day leisurely drive or conversely would make an excellent candidate for a full and thorough restoration. This particular example is very special in that it is one of very few produced in a left-hand-drive configuration.

Included with the sale of this car are the factory tools, jack, and spare as well as available service documentation and restoration photos.

Note from the publisher:
Welcome to our collector car marketplace where we feature thousands of classified ad listings of vintage cars for sale. We hope that you will bookmark our site and visit often; our cars are updated every day. Furthermore we encourage you to subscribe to our mailing list so that we may periodically notify you of interesting classic cars that become available.
Home > Classic Cars For Sale > Bentley > Mark VI > 1951 Bentley Mark VI