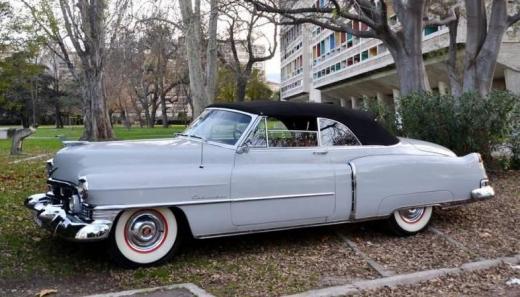 Price: Contact Seller for Price
Our Serie 62 Convertible left the factory in 1951, the year after the Cunningham Le Mans team proved that a Cadillac could do more than just drive "Miss Daisy".

Its penultimate owner purchased it in California in 1992 and soon after had the convertible restored in time for the 1994 National Cadillac Club Show where it was judged and deemed a numbers matching Senior example, listed as # 168 in the International Cadillac LaSalle Club registry.

This extensive 1994 restoration brought the car back to as-new spec, including its original color scheme of Mist Gray (paint code 10) over a red leather interior.

The last owner of this Series 62 Convertible bought the car in 2007, driven it sparingly.

In 2009, the engine and transmission were pulled, tested, and mechanically refreshed, while attending to electric and hydraulic systems. Since the car has been driven a mere 400 miles time enough to prove its roadability.

This 1951 Cadillac Series 62 Convertible was listed for sale on 6-1-20 14:52:54. The vehicle color is not available and VIN is not available . Kindly check ad for seller's location. Seller`s stock ID is 20SG996445553. There are other Cadillac cars currently listed for sale on our website. You may desire to see what other Cadillac cars are selling for by visiting our Sales Data page.

Back To Top
Classic car for sale by
GTC SARL

Note from the publisher:
Welcome to our collector car marketplace where we feature thousands of classified ad listings of vintage cars for sale. We hope that you will bookmark our site and visit often; our cars are updated every day. Furthermore we encourage you to subscribe to our mailing list so that we may periodically notify you of interesting classic cars that become available.
Home > Classic Cars For Sale > Cadillac > Series 62 Convertible > 1951 Cadillac Series 62 Convertible