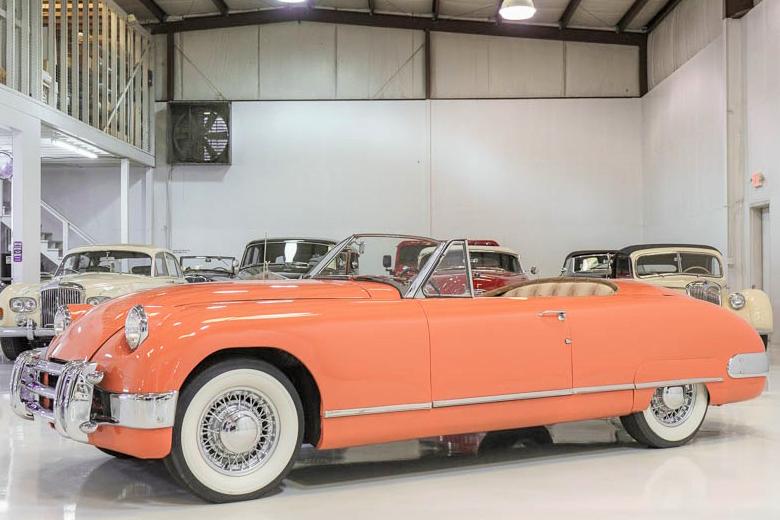 Price: USD $119,900
As the sports car craze swept the US in the early postwar years, several start-up manufacturers offered their vision of the ideal American roadster; Earl Madman Muntzs eponymous Muntz Jet, boasting top speeds well over 100 mph, is among the most notable. Muntz initially set up his manufacturing facilities in Glendale, California, completing about twenty-nine cars before relocating operations to Evanston, Illinois.This Muntz Jet offered here is the twenty-sixth car built and is among the very last of the vehicles constructed in California. It was one of the first Jets to feature the 145HP LincolnV-8, which replaced the earlier Cadillac engine. It is further distinguished as one of just two examples identified in the Muntz Jet Registry as having aluminum fenders. The desirable, California-built jets are identifiable by their slightly shorter 113 wheelbaseand low-profile windshield frames. According to the original sales contract accompanying the car, this Muntz Jet was sold new through the companys Sunset Boulevard sales office. It was purchased in August 1951 for the considerable sum of $4,500 by Alfred Freddie Trenkler, who achieved notoriety as a featured performer with the Ice Capades,acclaimed as the Greatest Show on Ice! Mr. Trenkler was among several Hollywood luminaries who drove a Muntz, including Eddie Rochester Anderson and The It Girl Clara Bow. Mr. Trenkler retained ownership of the Jet for anastonishing four decades before finally selling to a Southern California family, well-known and well-respected for their collection of American automobiles. In their care since 1991, the Jet has been a favored car in the collection. Finished in its original factory color combination of Salmon with optional textured Snakeskin interior; this magnificent Muntz Jet is one of the finest examples to be brought to market in years! This Muntz Jet Convertible is among one of the last to be built in the Glendale, California factory; equipped with the desirable low windshield and is only one of two with aluminum body panels. Retaining its original numbers matching Lincoln V-8 engine and accompanied by its first registration slip, archival photos, and Muntz Jet Registry. Articles service invoices dating to the original owner and more truly one of the most documented desirable Muntz Jet to be offered in years. We are proud to offer this incredible motorcar to the most demanding collector investor or enthusiast who desires the best. Classic carshave proven to be among the most resilient and rewarding investments in recent years with the Historic Automobile Group Index (HAGI) jumping 39% in 2013, 16% in 2014, and 17% in 2015 while posting gains of 467% over the last 10 years. Ready to make an investment that you canactually enjoy? Pleasecontact one of our expert sales consultants for more information. They will be happy to give you a complete walk-around, supply you with a more detailed description, and answer any questions you may have. Buy with confidence.

This 1951 Muntz Jet was listed for sale on 1-3-21 16:06:54. The vehicle color is not available and VIN is M51126 . Kindly check ad for seller's location. Seller`s stock ID is danie407492. There are other Muntz cars currently listed for sale on our website. You may desire to see what other Muntz cars are selling for by visiting our Sales Data page.

Note from the publisher:
Welcome to our collector car marketplace where we feature thousands of classified ad listings of vintage cars for sale. We hope that you will bookmark our site and visit often; our cars are updated every day. Furthermore we encourage you to subscribe to our mailing list so that we may periodically notify you of interesting classic cars that become available.
Home > Classic Cars For Sale > Muntz > Jet > 1951 Muntz Jet