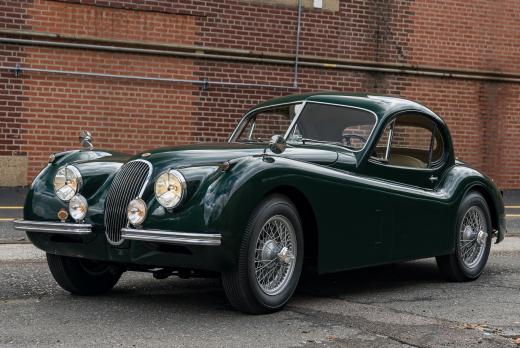 First launched in 1948 at the London Motor Show, the Jaguar XK120 saw immediate success bolstered by its proven top speed of 120 miles per hour, making it the fastest production car in the world at the time of its launch. The 120 was Jaguars first real post-war sporting offering and was powered by the 3.4-liter XK inline 6-cylinder engine. The first 242 cars were hand-built with aluminum bodies on ash framing with a steel chassis which was borrowed largely from the Jaguar Mark V chassis. Although it was first offered in only roadster form, a fixed head coupe, as well as drophead coupe, were added to production. In November of 1949, The Motor magazine tested the pre-production show stand car and reported a top speed of 124.6 mph, a 0-60 time of 10.0 seconds and average fuel consumption of 16.5 mpg. The XK120 would go on to be massively successful in racing all over the world, including in some of the biggest racing events of the time such as the Mille Miglia and Le Mans. In 1952 an XK120 driven by some of the best racers of the period achieved an average speed of 100.31 mph over a 7 day and 7 night period. Production of the XK120 ceased in 1954 when it was replaced by the similarly styled XK140. In total, around 12,055 Jaguar XK120s were produced for worldwide consumption during the 5 years of production.

The example on offer here chassis number 679505 and engine number W4484-8 is a numbers matching 1952 Jaguar XK120 Fixed Head Coupe. According to the included Jaguar Heritage Certificate, this car was originally finished in Suede Green exterior with Suede Green interior although now it is now finished in an elegant British Racing Green with a Tan interior. This car was purchased by the current owner in 1994 out of Waterloo, Ontario. At the time the car was completely in pieces and needing total restoration. Over the next 4 years, the owner completed the restoration of this XK120 on his own, finishing in 1998. The restoration was extremely thorough and covered every aspect of the car. In 2000 the car won an AACA Senior National First Prize in a testament to the clean and tidy work that was done on the car during restoration. As it sits today, the car shows as a nice older restoration. There are some underlying issues that have begun to surface but the car still presents very well in its elegant color combination. For more information about the current condition of the car please refer to the condition section located below. This particular example would make for a fantastic and useable driver quality car, perfect for back road drives during nice weather or light show and display.

Included with the sale of the car are the Jaguar Heritage certificate as well as tools.

This 1952 Jaguar XK 120 was listed for sale on 2-19-20 08:35:46. The vehicle color is British Racing Green and VIN is not available . Kindly check ad for seller's location. Seller`s stock ID is 20SG1488418557. There are 105 other Jaguar cars currently listed for sale on our website. You may desire to see what other Jaguar cars are selling for by visiting our Sales Data page.

Note from the publisher:
Welcome to our collector car marketplace where we feature thousands of classified ad listings of vintage cars for sale. We hope that you will bookmark our site and visit often; our cars are updated every day. Furthermore we encourage you to subscribe to our mailing list so that we may periodically notify you of interesting classic cars that become available.
Home > Classic Cars For Sale > Jaguar > XK 120 > 1952 Jaguar XK 120