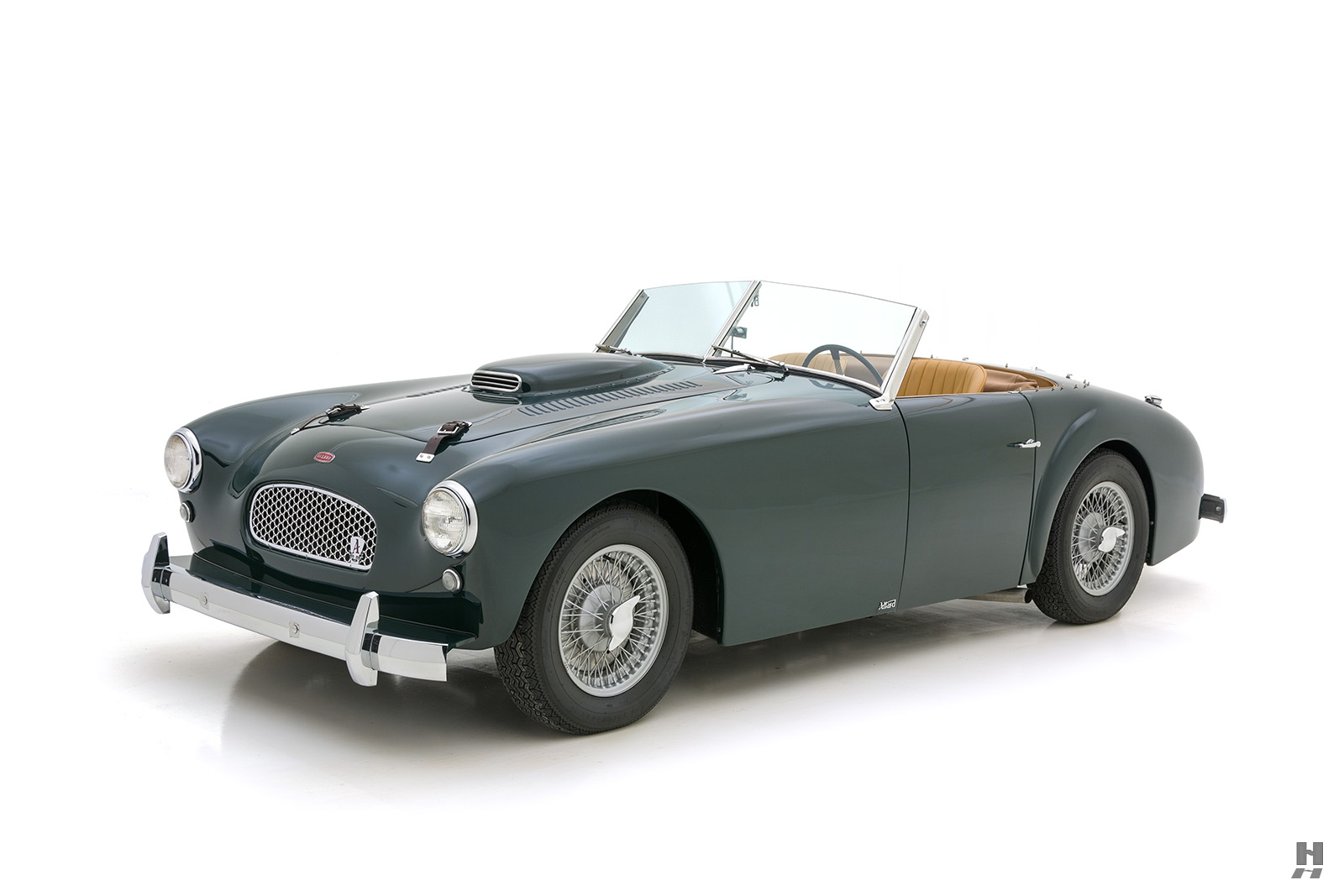 Price: USD $195,000
Allard Motor Company was founded in the aftermath of WWII by Sydney Allard a London garage owner with a reputation as a bold and courageous racing driver. Before the war Allard constructed a handful of trials cars using bespoke chassis and cheap American horsepower including the Flathead Ford V8 and even a Lincoln V12. His earliest cars were successful enough to sell about a dozen examples. After the war Sydney wasted little time getting back to motorsports. 1946 marked the arrival of the K1 a 2-seat roadster with a box-section chassis live rear axle transverse leaf springs and the signature split-axle front suspension designed by Les Ballamy. As a natural by-product of Allards war-time business repairing Ford military vehicles the ubiquitous Ford flathead V8 was the obvious engine choice with the option of a more powerful Mercury version coming later. Some cars featured ARDUN overhead-valve conversion as its creator Zora Arkus Duntov served as a technical advisor and works driver for Sydney Allard before going to General Motors where he famously saved the Corvette.The J2 marked Allards arrival on the international motorsport scene particularly in the United States where Cadillac Buick Oldsmobile or Chrysler V8-powered J2s dominated the lairy open road racing scene of the late 1940s and early 1950s. Soon large manufacturers caught the sports car bug pushing development along at such a pace that small firms like Allard struggled to keep up. Undaunted Sydney Allard persevered and continued developing new cars like the 1952 Palm Beach with its fully-enveloped body and four or six-cylinder Ford power from the Consul and Zephyr. Allard built just 80 but the body lived on to clothe the new K3. While the Palm Beach was a boulevard cruiser the K3 was little more than a mildly civilized road-going version of the brutal J2 in a handsome new suit. Hidden beneath the attractive alloy body was a massive American V8 usually a Ford or Mercury though Cadillac and Chrysler engines were also offered as was the Jaguar XK inline-six. Sadly for Allard the K3 sold in small numbers - just 62 examples were built and today they stand among the most collectible of all the Allard road cars.This 1953 Allard K3 is an outstanding example of this rare and exciting Anglo-American hybrid. Out of the 62 K3s produced this car is one of 57 delivered to the US market and one of just six originally equipped with Chryslers mightyFirePowerHemi V8 and a four-speed manual gearbox. According to records supplied by the Allard Register Sports Car Inc sold this K3 on March 14th 1953 to Mr. Leonard D. Henry of New York City and it was finished in silver gray with fawn weather equipment and a green interior. Subsequent owners included several prominent collectors and marque enthusiasts and the ownership history is well documented in the accompanying file.In the mid-1990s the car received a concours-quality restoration by RM Restorations of Ontario Canada. Their typically outstanding work is evident on this K3 which is now presented in dark green over a tan leather cockpit with silver painted wire wheels. Its slab-sided alloy body is exceptionally straight with precise panel gaps fine quality detailing and high-quality paint. The overall presentation is outstanding having matured slightly since the restoration yet remaining in lovely condition throughout thanks to a string of attentive custodians.Inside the quality of the restoration continues to impress. Lovely biscuit-tan leather graces the seats door cards and transmission tunnel. Originally equipped with a three-passenger bench seat the most recent owners updated it with Aldridge bucket seats trimmed in matching biscuit leather. These new seats are considerably more comfortable supportive and provide superior legroom. For the purist the original bench is available. The instrument panel is trimmed in the same tan leather housing a full array of recently restored Smiths instruments. Tan Wilton wool carpets and a full array of weather equipment in tan Stayfast canvas round out the finely presented cockpit. As with the exterior restoration the interior is beautifully finished and detailed to a very high standard displaying minimal signs of use since.Once in the drivers seat you grip a classic four-spoke banjo-style steering wheel its delicate rim belying the brutish V8 just ahead of you. Chryslers FirePower Hemi is well-detailed and tidy. Topped with dual four-barrel carburetors on an aluminum intake it makes upwards of 325 horsepower and sounds utterly fantastic breathing through dual side-exit exhausts. Weighing in at just over 2500 pounds theres little doubt this K3 can thrill all occupants. In recent ownership service work included the fitment of proper Alfin brake drums restored gauges new carpet and general sorting and fine-tuning to ensure it looks and performs its best.Allards have always been exciting cars to drive and this superb K3 is no exception. It would be a fabulous choice the Colorado Grand Copperstate 1000 or any similar event. It is also a veteran concours participant and proven award winner appearing in numerous prestigious shows through the years including Meadowbrook Cranbrook Cobble Beach The Elegance at Hershey and the 2018 Hilton Head Concours where it won Best in Class against a class of all Allard cars. This very special Allard K3 is a gorgeous example of a rare breed a worthy addition to virtually any collection of sporting cars and a fantastic machine thats sure to absolutely thrill its next custodian.Offers welcome and trades consideredFor additional details please view this listing directly on our website https://hymanltd.com/vehicles/6899-1953-allard-k3-roadster/

This 1953 Allard K3 was listed for sale on 2-17-21 11:02:46. The vehicle color is not available and VIN is K33189 . Kindly check ad for seller's location. Seller`s stock ID is hyman6899. There are other Allard cars currently listed for sale on our website. You may desire to see what other Allard cars are selling for by visiting our Sales Data page.

Note from the publisher:
Welcome to our collector car marketplace where we feature thousands of classified ad listings of vintage cars for sale. We hope that you will bookmark our site and visit often; our cars are updated every day. Furthermore we encourage you to subscribe to our mailing list so that we may periodically notify you of interesting classic cars that become available.
Home > Classic Cars For Sale > Allard > K3 > 1953 Allard K3