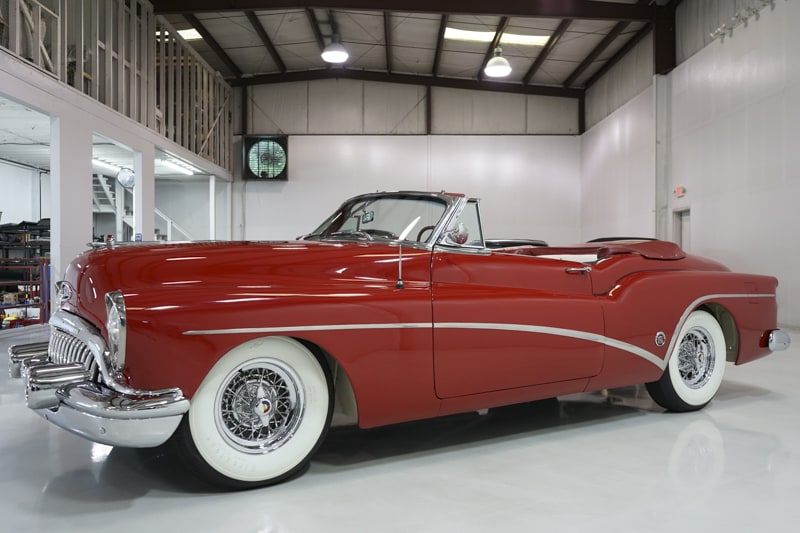 Price: USD $149,900
The exceptional 1953 Buick Roadmaster Skylark Convertible featured here is finished in stunning Matador Red over a complimentary red and white leather interior and white power folding convertible top. This particular example has just been released from collector ownership and was previously subject to an extensive body-off frame restoration featuring meticulous attention to detail throughout. Today the Skylark presents in spectacular condition, having been driven only 3,948 miles since restoration. The first production year combination of the 322ci nailhead V8 engine and the twin-turnbine dynaflow transmission perform wonderfully and this rare and highly sought after Buick is sure to bring many years of enjoyment to its future caretaker! We are proud to offer this exceptional 1953 Buick Roadmaster Skylark Convertible to the most astute collector, investor or enthusiast who appreciates the rarity and level of luxury that is displayed throughout this iconic American model. Classic carshave proven to be among the most resilient and rewarding investments in recent years with the Historic Automobile Group Index (HAGI) jumping 39% in 2013, 16% in 2014 and 17% in 2015 while posting gains of 467% over the last 10 years. Ready to make aninvestment that you can actually enjoy?Please contact John Sherman,one of our expert sales consultants, at (314) 291-7000 or johns@schmitt.com for more information. He will be happy to give you a complete walk-around, supply you with a more detailed description and answer any questions you may have. Buy with confidence. One of the most stunning Harley Earl design exercises of all time, the 1953 Buick Skylark is one of the most legendary GM cars ever built. Part of Earls Triple Crown of limited production, hand-built showcars for the public that were basically production versions of GM Motorama concept cars were produced to showcase GMs world leading designs. The Triple Crown consisted of the 1953 Cadillac Eldorado, the 1953 Oldsmobile Fiesta, and the 1953 Buick Skylark. Most consider the Skylark to be the best looking of the three. As Buick was 50 years old in 1953, the Skylark also served as a stunning anniversary special for the company. As an essentially factory-built custom, the Skylark had a number of firsts for Buick, many that were features first used on the Skylark and later introduced on regular production Buicks. Some examples include the first Buick V-8 engine; 12 Volt electrical system; cut-down door sweep; and more. The Roadmaster Skylark was one of the most expensive motorcars of its era with a price new of $5,000 which was $2,000 more than the more traditional 1953 Roadmaster. Even at this price, Buick was said to have lost thousands on each Skylark sold due to their essentially hand-built nature. Fenders, doors, and quarter panels were sectioned and modified by hand to create the perfect stance, along with a custom chopped and chromed convertible top frame, windshield, door glass, and specially constructed and lowered seats to compensate. The success of the Skylark was undoubtedly due to its numerous trendsetting features, such as V8 power, a 12-volt electrical system, full cutout wheel openings, and stylish sweepspear chrome body accents which would find their way onto future Buick models. Only 1,690 Roadmaster Skylark Convertibles were assembled for 1953; of which as few as only 100 are estimated to exist today meaning that examples today are highly sought after by some of the worlds most premier collectors.

This 1953 Buick Roadmaster was listed for sale on 8-16-20 13:32:50. The vehicle color is not available and VIN is 16913888 . Kindly check ad for seller's location. Seller`s stock ID is danie407409CJS_Skylark. There are other Buick cars currently listed for sale on our website. You may desire to see what other Buick cars are selling for by visiting our Sales Data page.

Note from the publisher:
Welcome to our collector car marketplace where we feature thousands of classified ad listings of vintage cars for sale. We hope that you will bookmark our site and visit often; our cars are updated every day. Furthermore we encourage you to subscribe to our mailing list so that we may periodically notify you of interesting classic cars that become available.
Home > Classic Cars For Sale > Buick > Roadmaster > 1953 Buick Roadmaster