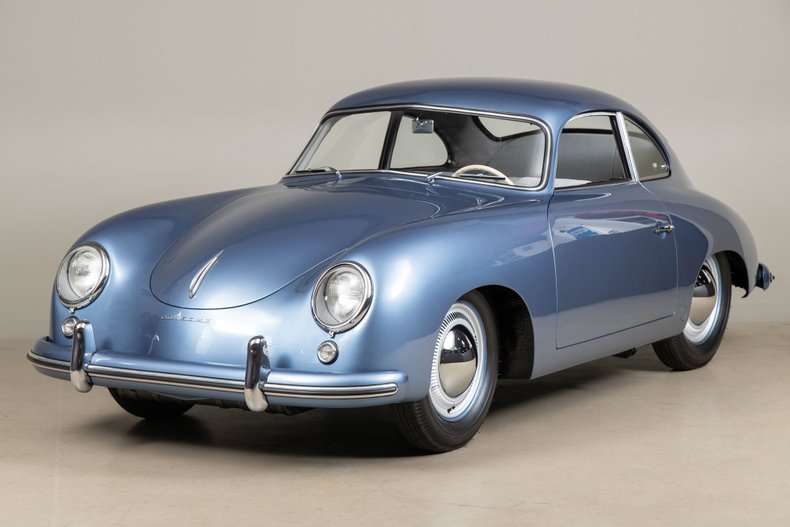 Price: Contact Seller for Price
1953 Porsche 356 1500 Coupe Pre A View high resolution photos 1st place Concours Restoration Group Award at 2018 Porsche Parade 1st in Class Restored Category, with Gmund Achievement with 299.8 points Award-winning 4-year restoration California car for most of its ownership history Original matching numbers 1,500cc flat four engine Meticulous collection of receipts, restoration photos Copy of Kardex, Porsche Certificate of Authenticity, tools, jack, and spare Pre-A 356s hold a special place in many Porsche drivers hearts, setting the stage for the future 356 lineage, a design that would be used for more than 15 years. Simple yet elegant, sporty and comfortable, the 356 was a reachable way for someone to get into a capable sports car that was able to drive long distances and win races in. This 1953 Porsche 356 1500 Coupe is just that. Elegant lines paired with an exceptional period-correct color choice, completely restored and winner of Porsche Parades Gmund Achievement award, all with an incredible story of Southern California history. Imported by Max Hoffman, this 356 was purchased by an owner in San Diego, California in the mid to late 1950s who subsequently sold it to his son. The son drove it for a number of years before selling it to one of his friends, also believed to have lived in the Southern California area. The 356 changed hands among friends for a while before the son re-acquired the car. In 2010, the sons estate handling his affairs was approached by a Southern California native who was a restorer and fan of 356s, having owned many coupes, roadsters and speedsters throughout his career. The car was mostly complete but had been disassembled in preparation for a restoration some years back, but luckily most of the cars parts (including the matching numbers engine) had stayed with the car. He purchased the 356 and took it back to his warehouse where he would wait and decide what route he would like to go with the car. In 2015 the restorer made the decision to carry out a no-expense-spared concours-level restoration on the Pre-A coupe. He stripped the paint off of the 356 revealing a solid and original car, with no evidence of accidents with only minimal rust. Adding more to it being a solid car was that it still retained all of its matching body panels, each stamped with number 13. Setting to work, he replaced the floors and longitudinals, as well as the front fender edges. The doors, hood, and decklid were all fitted and adjusted to match the factory settings, and the entire car was completely metal finished. Once the metal work was completed, it received coats of red primer exactly how the factory did with Pre-A production. An original swatch of period-correct Adria Blue paint was sourced and matched, then spraying the color and accenting the 356s elegance even more. Wanting both a stunning visual car as well as a performer, every mechanical system in the car was fully addressed for functionality and originality. The matching numbers 1,500cc engine was rebuilt with original pistons and cylinders, and uses correct dual Solex 32 carburetors. The transaxle is the correct 519 style, expertly rebuild by noted transaxle specialist Vic Skirmats. The rest of the car received the same level of attention to detail: brakes and suspension were rebuilt to factory specs, and all of the cars hardware was correctly plated and installed. This meticulous care for authenticity ensured that nothing was left to chance in being the best it would be. Parts were replaced when needed, but extra special attention was paid to preserving and restoring as many original parts when possible. Taking extra care in making sure that the car was extremely period correct, an original unrestored 1953 coupe was found and used for interior patterns. The correct style of grey corduroy was sourced, the vinyl pattern

This 1953 Porsche 356 was listed for sale on 10-5-19 08:12:31. The vehicle color is Adria Blue Metallic and VIN is not available . Kindly check ad for seller's location. Seller`s stock ID is canep6092. There are 158 other Porsche cars currently listed for sale on our website. You may desire to see what other Porsche cars are selling for by visiting our Sales Data page.

Note from the publisher:
Welcome to our collector car marketplace where we feature thousands of classified ad listings of vintage cars for sale. We hope that you will bookmark our site and visit often; our cars are updated every day. Furthermore we encourage you to subscribe to our mailing list so that we may periodically notify you of interesting classic cars that become available.
Home > Classic Cars For Sale > Porsche > 356 > 1953 Porsche 356