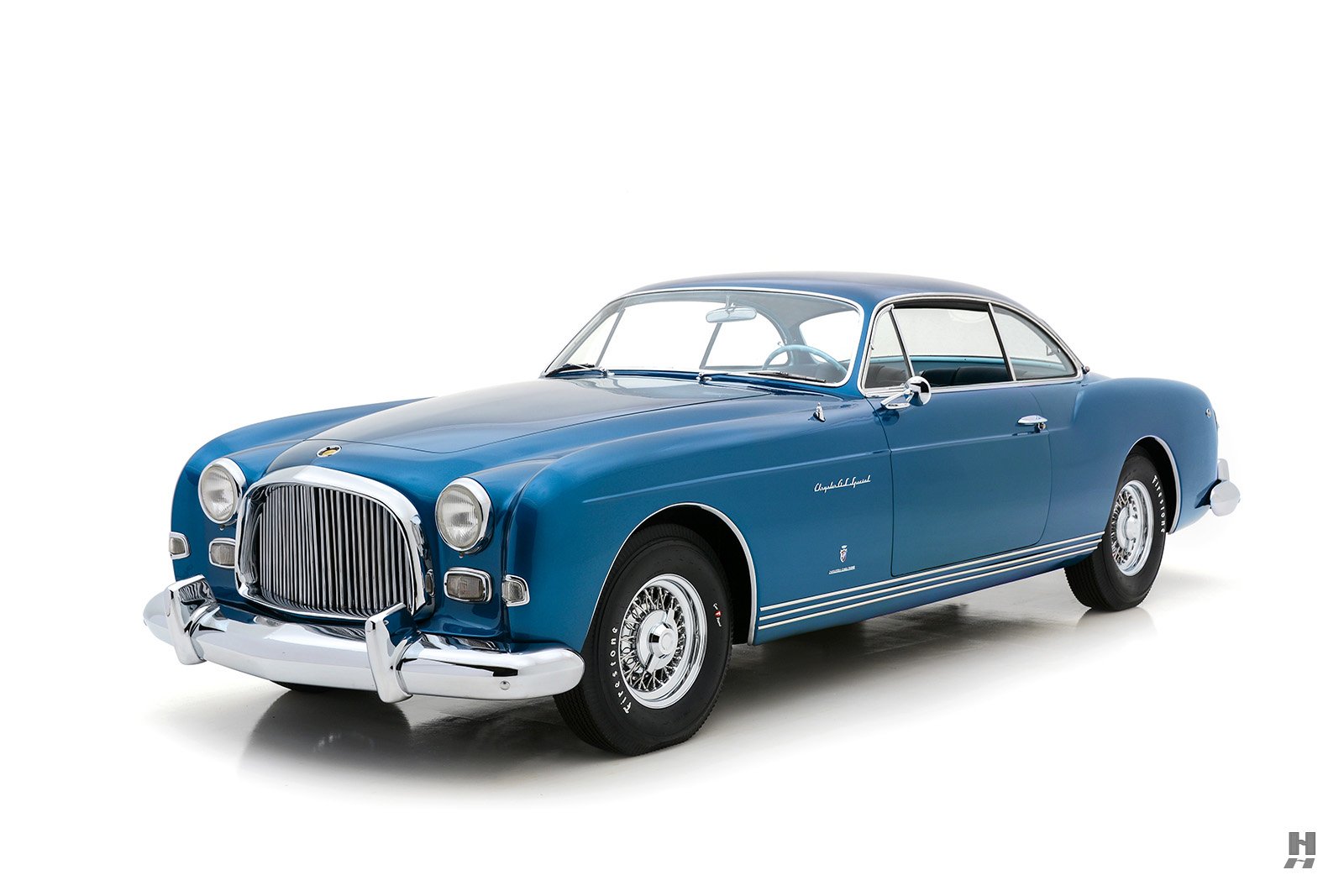 Price: USD $695,000
As the American auto industry returned to civilian production in 1946 overwhelming demand retooling efforts and material shortages forced hasty redesigns of pre-war models so that dealers would have something to offer. New post-war era designs rolled out gradually but Chrysler Corporation lagged behind many of its rivals including GM Ford and Studebaker. At Chrysler styling fell under the realm of the engineering department who worked under the mandate that a gentleman should not have to remove his hat when climbing aboard a Chrysler product. This old-fashioned attitude led to a series of upright stodgy designs at a time when cars were becoming increasingly sleek and stylish. In the 1950s Chrysler boss K.T. Keller grew eager to shake the conservative image once and for all and company executives pulled out all the stops to show the American public that Chrysler was getting serious about style.Keller deserves due credit for hiring Virgil Exner an ex-GM and Studebaker designer whose recent falling out with Raymond Loewy presented Chrysler with a perfect opportunity to revitalize their image. Keller set Exner loose on a series of so-called Idea Cars intended to inject some life into the Chrysler design department and putting style back in the hands of the artists. While Exner and Keller rebuilt Chryslers image they established a relationship with Luigi Gigi Segre the ambitious Commercial Director of Carrozzeria Ghia in Italy. Segre along with his boss Mario Boano initially met with the Chrysler men to discuss Ghias coachbuilding services. Segre and Exner hit it off leading to a long and productive relationship between these two unlikely allies.Virgil Exner and Luigi Segre collaborated on designs and the latters skilled Italian craftsmen provided affordable labor for hand-building the prototypes show cars and exclusive models that followed. Cars like the Chrysler dElegance DeSoto Adventurer and Dodge Firearrow are considered some of the most beautiful and influential American dream cars of the era. In 1952 they revealed the Chrysler Special a stunning one-off built for export division boss C.B. Thomas. Later known as the Chrysler Thomas Special this car served as the inspiration for a limited run of highly exclusive and stylish luxury coupes known as Ghia Specials. Chrysler supplied Hemi-powered New Yorker chassis to Ghia who hand-built the coachwork to Exners design and completed cars were sold exclusively through the official French Chrysler distributor Socit French Motors. Exner envisioned a run of 400 vehicles but more pressing domestic market issues meant Chryslers official interest gradually waned and the $10000 price tag didnt help. Production was closer to just fifty cars in total with three versions ultimately offered the 1953 Ghia Special the 1954 GS-1 and the 1955 ST each rarer than the last. When Chrysler officially bowed out France-Motors took over production of the final dozen or so cars. While the GS series was a commercial failure it succeeded in revitalizing Chryslers image and giving Exner and his team the confidence to create a line of beautiful production cars in the coming years.Our featured 1954 Chrysler GS-1 is a gorgeous example of this highly collectible Italian-American hybrid. Chassis number 7252367 is one of approximately 15 Chrysler Ghia GS-1s produced in 1954 and is among a mere handful of known survivors. Distinguishing the GS-1 from the 1953 Ghia Special are the later cars larger bumpers revised grille treatment and a pronounced swage line adding definition to the body sides and accentuating the GS-1s low long proportions. According to a respected expert on these cars chassis number 7252367 and its sister car (chassis 368) were completed by Ghia in November 1953 and supplied together to the Chrysler Export Corporation. While there are no official records regarding the first owners it is assumed Chrysler reserved these two cars for executives. Our featured car is one of only two GS-1s with individual bucket seats in the rear (all others had a bench seat) and along with car 368 it features a unique grille design with no horizontal bars.By the late 1950s this GS-1 was on the West Coast in the hands of Mr. Thomas Atherstone. Undoubtedly proud of his beautiful new acquisition Mr. Atherstone showed it at the 1959 Pebble Beach Concours dElegance when the car was only five years old. The judges also appreciated the Ghia-Chryslers beauty by awarding it First in Class. The winners ribbon is still in the cars history file as are period photos of Atherstone on the Pebble Beach winners podium showing the distinct grille and bucket rear seats. It changed ownership a couple of times through the years eventually coming into the hands of Martin Swig a noted enthusiast entrepreneur car dealer and founder of the California Mille. In the early 1980s he sold the GS-1 to a fellow Californian and Chrysler-Ghia enthusiast who cherished it until 2019. Along the way the GS-1 enjoyed consistent care and restoration work as needed while also being a regular participant in local shows and events.Looking resplendent in medium metallic blue with superb chrome wire wheels and detailed black wall Firestone tires this GS-1 has all the looks of glamorous 1950s auto show star. It benefits from a recently freshened restoration and presents in beautiful condition displaying excellent paintwork and chrome. Period details include the original Marchal Equilux headlamps front fog lamps and the delicate pillar-mounted Marchal side-marker lamps. The complementary blue interior is in similarly fine order with lovely blue leather displaying some very light creasing from use that gives it an inviting character. The interior is authentic down to the perforated headlining tinted Plexiglas visors and original instrumentation. The same meticulous attention to detail continues under the hood where the 1954-spec 235-horsepower 331 Hemi is in superb order presented with high-quality finishes and proper hardware.Available for the first time in more than 30 years this gorgeous Chrysler Ghia GS-1 is beautifully prepared and ready for its next caretaker. It will surely be a marvelous addition to any collection of significant coachbuilt automobiles as well as a welcome participant in any number of motoring events the world over.Offers welcome and trades consideredFor additional details please view this listing directly on our website https://hymanltd.com/vehicles/6462-1954-chrysler-gs1-coupe/

This 1954 Chrysler GS1 was listed for sale on 4-1-20 06:45:57. The vehicle color is not available and VIN is not available . Kindly check ad for seller's location. Seller`s stock ID is hyman6462. There are other Chrysler cars currently listed for sale on our website. You may desire to see what other Chrysler cars are selling for by visiting our Sales Data page.

Note from the publisher:
Welcome to our collector car marketplace where we feature thousands of classified ad listings of vintage cars for sale. We hope that you will bookmark our site and visit often; our cars are updated every day. Furthermore we encourage you to subscribe to our mailing list so that we may periodically notify you of interesting classic cars that become available.
Home > Classic Cars For Sale > Chrysler > GS1 > 1954 Chrysler GS1